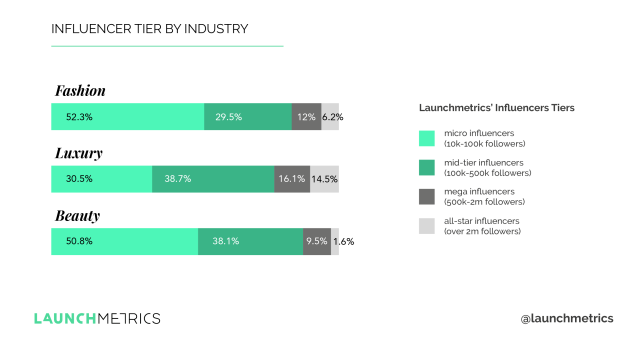 In an increasingly saturated influencer landscape, the micros are coming out on top.
Microinfluencers, aka influencers with between 10,000 and 100,000 followers, are steadily gaining popularity in fashion and beauty, according to Launchmetrics' annual State of Influencer Marketing report. The 2019 report surveyed marketing, communications and public relations professionals from the fashion, luxury and beauty sectors, as well as influencers. Of those surveyed, 45.5 percent said they prefer working with microinfluencers.
In a statement, Michael Jais, chief executive officer of Launchmetrics, declared influencer marketing more than just a trend. It is "a critical part" of companies' marketing strategies, he said.
"Now that some time has passed, we have witnessed that this ‘trend’ was not as brief as some claimed, and that it has in fact stabilized and become a common professional practice within our sector,” he said. "It is now a critical part of brands’ marketing strategies, and brands are investing heavily. It’s no longer a question of ​if​ brands should be engaging with these new channels, but ​how.​"
The Launchmetrics report found that 80 percent of professionals said they work with influencers — a number that increases every year. The majority of respondents said awareness was the goal for which their influencer campaigns were most effective, and 76 percent of those surveyed said they obtained better sales results because of influencer collaborations. Year-over-year, 6.7 percent more respondents said influencers were effective in driving sales.
As influencer marketing continues to grow, how to stay authentic remains a top challenge, hence the rising popularity of microinfluencers and mid-tier influencers, which Launchmetrics defines as those who have between 100,000 and 500,000 followers. The report said that 45.5 percent of respondents prefer to work with microinfluencers and 37.7 percent prefer working with mid-tier influencers.
Brands are also using influencers to speak to a younger audience. The report found that Generation Z consumers, who are defined as those between the ages of 6 and 23, make up the smallest, but fastest-growing share of the target audience in its survey. Gen Z is a bigger target for fashion brands than for luxury and beauty brands, according to the study. About 21 percent of fashion industry professionals said they target Gen Z.
Despite their eagerness to participate in influencer marketing, brands continue to encounter logistical challenges. More than half of respondents — 56.9 percent — said they struggle with managing influencer collaborations. Launchmetrics found that sales of its Influencers tool more than doubled over the past year, which is a sign that brands are seeking efficiency in influencer-related efforts.
Launchmetrics' report, which can be downloaded in full here, features case studies of brands and influencers such as Fendi and all-star influencer Chiara Ferragni, who has more than 16 million followers. The report also includes insights from executives at Fendi and IMG Models, as well as Joerg Zuber, creator of virtual influencer @noonoouri.
More from WWD.com:
Get Ready for Another Youthquake: A New Generation Comes of Age
When It Comes to Beauty, It's an Influencer's World
Source: Read Full Article