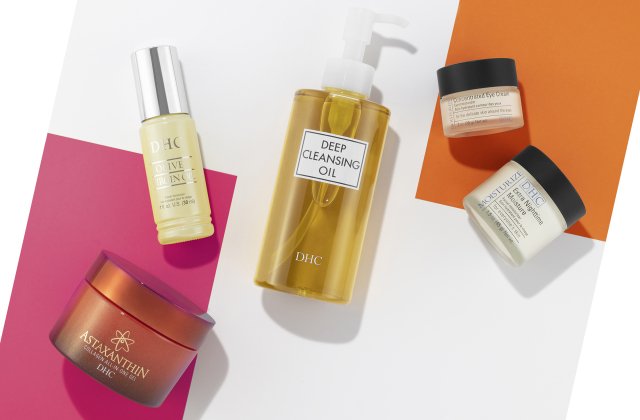 Japanese skin-care brand DHC is moving into Ulta Beauty doors.
Tokyo-based DHC, which has been sold in the U.S. primarily through its catalogue business since the Eighties, is looking to ramp up its retail presence in the States. On March 3, five of the brand's hero stockkeeping units entered all of Ulta's 1,124 doors. Eighteen sku's are available on ulta.com.
The in-store assortment includes DHC Deep Cleansing Oil, $28; Olive Virgin Oil, $42; Astaxanthin Collagen All-In-One Gel, $49; Extra Nighttime Moisturizer, $36; and Concentrated Eye Cream, $35.
The launch is coming at a time when the brand's simple and relatively affordable skin-care products have gained followings in the U.S. and Europe, thanks to a shift in strategy from direct sales via catalogue to brick-and-mortar retail and e-commerce. Company execs declined to discuss sales figures, but industry sources say the brand grew triple digits last year in the U.K., and double digits in France. In the U.S., the brand is said to do well on Amazon, and in 2018 it launched in Forever 21's Riley Rose doors.
DHC's launch in Ulta coincides with the retailer's increased focus on skin care, a category currently growing at a faster rate than makeup, according to the NPD Group. Last year, Ulta, which counts makeup as its largest category, brought on brands such as Elemis, Kopari, Crepe Erase and Peach & Lily to its prestige skin-care assortment.