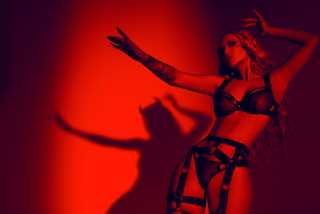 “It’s representing that unabashed, unafraid, naughty side of yourself,” she said of the devilish figure illustrated on the sleek, dark bottle. In the image, a pink, nude outline resembling Azalea is seen embracing a red, horned silhouette.

“It’s meant to be a reflection of that naughty, cheeky, almost the devil on your shoulder or that part of me that says, like, ‘Just do it, just go, just have fun, go out with your friends that night, double text the guy,’” the rapper went on. “It’s about embracing the duality of yourself.”

She’s passionate as she describes the concept for the fragrance, which has been a year in the making. The idea, its marketing and packaging were developed prior to the scent itself.

“My approach was a little unique in that way, and I didn’t realize that until I spoke to the perfumer,” she said, calling from Los Angeles. “I suppose I kind of went backward, but for me, that made sense, because I wanted to develop a world of escapism.”

The scent was inspired by her native country, Australia, which she left in her teens for the U.S. to pursue music. The smell reminds her of home.

“I really wanted to have Australian sandalwood be the top note that runs throughout the scent,” she said. “I really love that scent. I grew up with it. My mother would always have that in our house.” 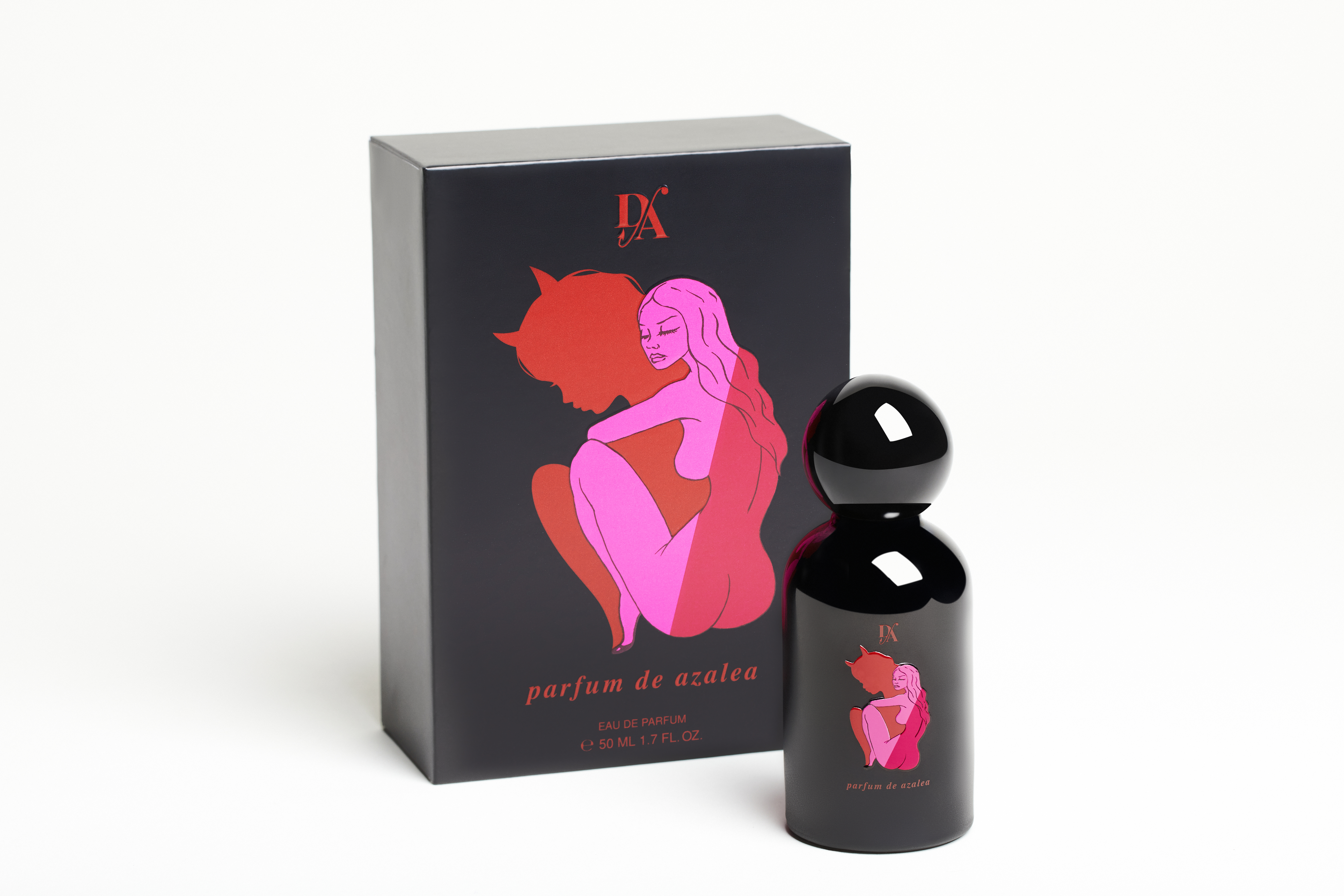 Priced at $57 for a 50-ml bottle, the fragrance is available at Parfumdeazalea.com. Courtesy

The endeavor is a partnership with L.A.-based Merveilleux Beauty. After 11 years in the entertainment industry, as a four-time Grammy-nominee and multiplatinum artist, it’s Azalea’s first beauty release.

“The reason why they were the right partner for me was because they were willing to give me ownership, first of all, of my own brand that nobody else was really willing to give me,” Azalea said. “But secondly, they really respected my creative vision and took a back seat…I have total ownership and total control.”

Working remotely through the pandemic, she and the perfumer had many conversations over Zoom, specifically focused on emotions and what the scent would evoke.

“We talked about what it is exactly that I wanted people to feel, particularly when they sprayed this on them and how it would represent them,” Azalea said.

She was her own guinea pig, wearing different variations of the scent for a week at a time to test it out. She wanted the smell to be memorable, but not too heavy.

“I was very specific about that kind of thing,” she explained. “I love to have scents that stay on, like say a sweater that you leave at your boyfriend’s house, and they smell it after and think of you. Or maybe you laid in bed and your lover’s gone but you can smell them on your pillow. I love that kind of sense of memory, but I don’t like when you walk into an elevator after somebody’s walked out and you can smell their fragrance. To me, that’s overkill. I don’t want to smell someone when they walk up, but if I give them an intimate hug, [it’s nice if] they have a subtle scent.”

The visual concept of “duality” is also reflected in the scent, she added: “Initially, it almost feels more masculine, more sensual and has a more woody, amber fragrance. And then as it sits on you, it feels more feminine, and you get more of those softer top notes of floral….You get the really creamy orchids and more citrus smell.”

The unisex fragrance, priced at $57 for a 50-ml bottle, is available today direct-to-consumer at Parfumdeazalea.com.

Azalea is eager to share it with the world — and her fans. On Instagram alone, she has 14.6 million followers. On YouTube, one of her most popular hits, “Fancy,” has more than a billion views.

She said bringing “Devil’s Advocate” to life has felt similar to creating music: “Fragrance is so emotional, the same way that even songwriting is. When I sit down, and I’m writing a song, I’m considering what I want people to feel, even if it’s a party song and the emotion of happiness or chaos even sometimes. I have never really associated that kind of thing with beauty or a product before, because I just hadn’t had that inside experience or the ability to develop something, develop a conceptual idea and the universe of a product. I’ve enjoyed it so much. I honestly enjoyed it as much as making music.”

Azalea, who is days away from celebrating her 31st birthday, is getting ready to drop her third record this year, “End of an Era.” It’s a retrospective, she revealed, that dives into her 20s. It’s divided into four segments with four songs in each: 20, 24, 28 and 30.

“The first portion of my album is more heavily electronic and experimental sounding and kind of reflects my mixtape days,” she said. “The 24th section of the album is more sonically mainstream and pop-influenced…28 is a much more urban, drum heavy sound…and then when it’s the final section of the album, which is 30, those final songs really represent where I am currently, as of right now.”

The music videos, too, will reference her works through the years.