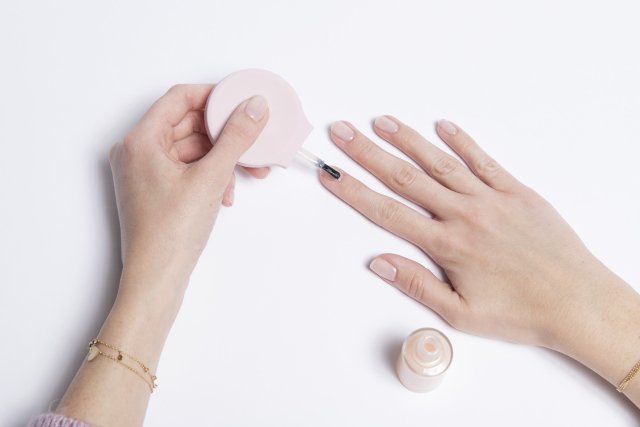 Olive & June, the Los Angeles-based nail salon known for attracting a fashion-minded Millennial clientele, is set to launch a product line.
On Thursday, Olive & June will debut its assortment of nail products, including nail polish, a top coat, a cuticle hydration serum, nail polish remover, a clean-up brush, and the star of the show — the Poppy handle, a patent-pending rubber tool designed to fit over the top of a polish bottle and steady a nondominant hand while doing a manicure at home. Lastly, there is The Olive U Studio, an at-home manicure kit containing the handle and other essentials for an at-home manicure, including a detailed instruction booklet.
Prices range from $8 for polish to $16 for the Poppy handle and $48 for the box set.
It is not the first time Olive & June has launched product. The salon, known for its Instagrammable, minimalist, chic aesthetic, teamed with accessories designer Charlotte Stone on a line of pedicure-ready sandals. Then came nail art stickers last April, which launched in time for Coachella, at $7.50 a sheet. Less than one day after Refinery29 wrote a story about them, 1,000 sheets of nail stickers sold out from Olive & June's web site.
Sarah Gibson Tuttle, founder and chief executive officer of Olive & June, opened the first salon location in Beverly Hills in 2013 — there are now two more, in Santa Monica and Pasadena — and had been grappling with how to expand her business when the nail stickers sold out.
"We looked at the market and said, 'Do we want 100 salons chain model, or is there something else we want to do?'" said Tuttle. "Women on the coasts are afforded this luxury of getting their nails done weekly or biweekly , but women in other parts of the country were six times a year."
Tuttle began looking into creating something for at-home manicures — going so far as to do her own nails for a year to figure out the pain points. "We polled women, we wanted to know if they did their own nails — we found that they wanted to, but felt like painting with their nondominant hand was nearly impossible, and there's no education on doing your own nails. That was a light-bulb moment of, 'We should teach everyone to do their own nails.'"
For now, Tuttle plans to retail on olivejune.com and in salons. She has more polish colors planned for fall and holiday — thus far, they are neutral hues that mimic the muted tones she uses to decorate her salons. The polishes are seven-free, formulated without some of the most common chemicals used to create nail polishes. Tuttle could have gone for an even cleaner formulation, she said, but while her clientele cares about ingredients, they care more about unchipped nails.