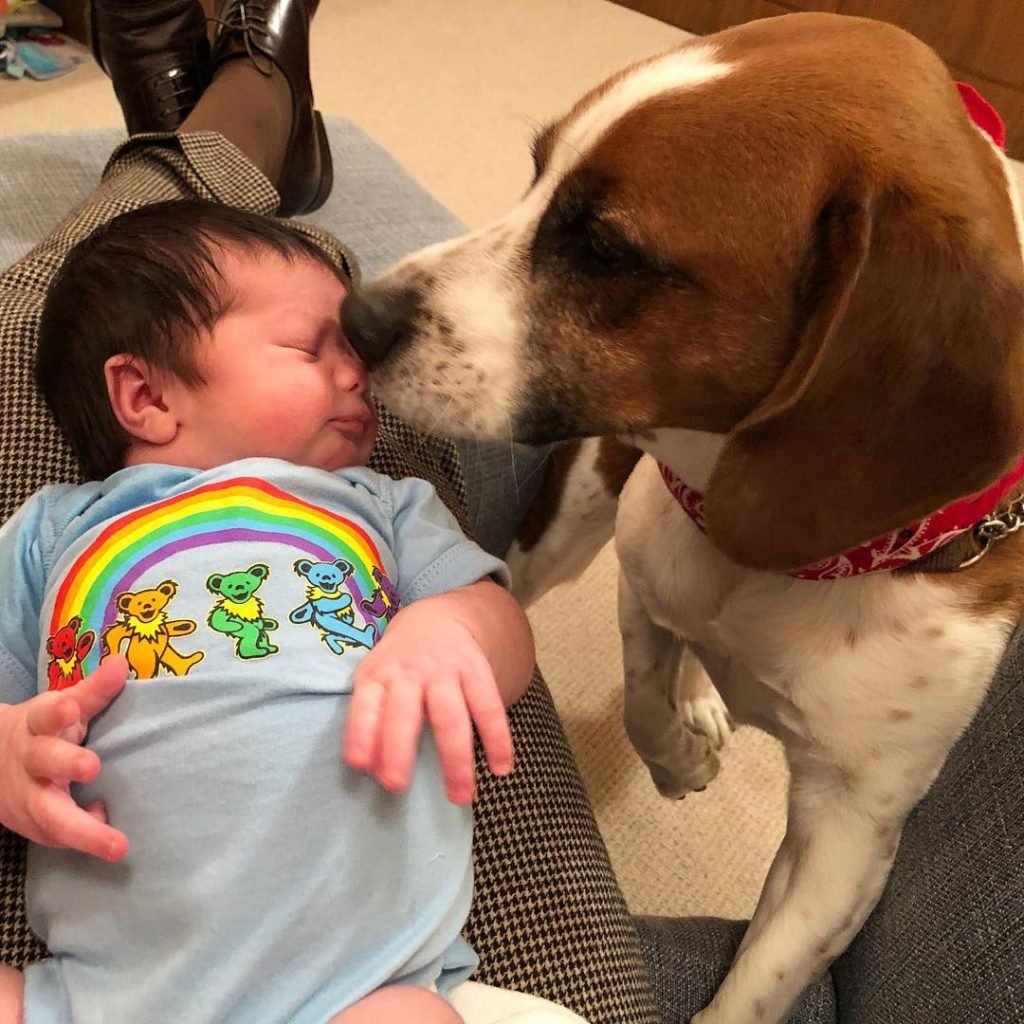 Andy Cohen‘s 2-week-old son Benjamin Allen and dog Wacha are two peas in a pod on National Love Your Pet Day, sharing a sniff in a snapshot the Watch What Happens Live host shared to Instagram Wednesday.

In the photo, Benjamin is rocking a blue Grateful Dead onesie (which goes for $26 at littlehippie.com) and resting on his back atop his dad’s legs while Wacha peers over the top of the newborn, seemingly sniffing his face.

“Many have asked how @therealwacha & his brother are getting along. Here you go! ? ? #loveyourpetday,” Cohen, 50, captioned the cute image.

Among the sweet comments left by fellow celebs? One from Real Housewives of Atlanta star Porsha Williams, who quipped, “Love at first lick” alongside a red heart emoji, while Katie Couric enthused, “Omg that onesie!” and followed up with a string of emojis including a heart-eyes face, a crying-laughing face and a rainbow.

For last week’s issue of PEOPLE, Cohen and his cover costar Benjamin posed for an exclusive photo shoot, and the new dad sat down for an interview with PEOPLE and Entertainment Weekly Editorial Director Jess Cagle about all things fatherhood — including his plans for introducing his son and canine.

“And then that dog is going to bound in here in a few days. He’ll be back,” Cohen continued. “There’s gonna be a bris [a Jewish circumcision ceremony], and then the dog will appear.”

As far as exposing his son to his favorite band, the proud dad (who followed the musicians on tour before Benjamin’s birth!) said, “I’ve already started playing the Grateful Dead for him. He’s going to be a Deadhead. He has to love music. He will grow up with music, no question.”

Cohen’s sweet Wednesday post comes five days after Wacha destroyed a toy of Benjamin’s, which the Bravo star chronicled on his Instagram Story.

After being “flooded with DMs” from fans about the potential of his dog being jealous of the new baby, Cohen set the record straight about Wacha’s intentions.

“Wacha didn’t know that the Torah toy belonged to the baby. He just had his eye on a purple f— toy and he wanted to rip it apart,” he continued. “It’s not that deep. Stand down. Everything’s fine in the West Village.”

Directly addressing his pooch in another video, Cohen added, “Hey, I’ve been a dad for 12 days, people are judgy as f—. We gotta be careful, okay. Sometimes a Torah toy is just a Torah toy everybody, right?”