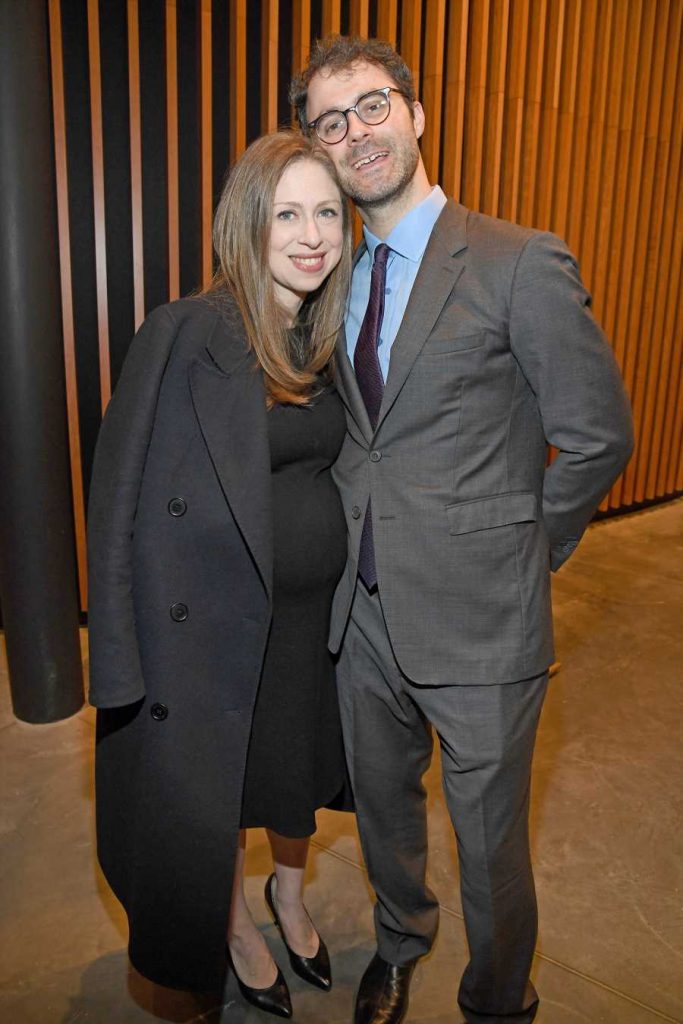 The former first daughter, 39, was accompanied by her husband Marc Mezvinsky for an outing in New York City on Wednesday, where they celebrated the opening of the Statue of Liberty Museum on Ellis Island.

For the occasion, Clinton wore a long coat over a black midi dress that put her baby bump on full display, finishing the ensemble in coordinating black pumps.

Mezvinsky, 41, looked dapper in a two-piece gray suit over a light-blue shirt and shiny black shoes.

Pregnant Chelsea Clinton Wants to “Empower” Kids with New Book: “Yes, We Can Make a Difference!”

Clinton announced her pregnancy in January, revealing that she and her husband of eight years would be welcoming a little brother or sister for their son Aidan, 3 next month, and daughter Charlotte, 4½, in the summer.

“Marc and I have loved watching Charlotte be such a wonderful big sister and we’re excited to watch Aidan become a big brother!” Clinton wrote on Twitter, adding, “We cannot wait to meet our newest addition later this summer.”

Last month, the children’s book author and Clinton Foundation vice chair told PEOPLE that the couple were “thrilled to share the news with my parents [Bill and Hillary Clinton] and my mother-in-law.”

Acknowledging that “every grandchild is so special,” Clinton said it’s a “different dynamic” for her parents compared to her mother-in-law, former Congresswoman Marjorie Margolies. The next Clinton Mezvinsky will be the Clintons’ third grandchild, while he or she will be Margolies’ 23rd.

And like in her previous pregnancies, Clinton and Mezvinsky won’t find out the sex of the baby before the birth. “We didn’t find out with Charlotte or Aidan and we’re not finding out this time,” she told PEOPLE.

But that hasn’t stopped Charlotte from looking forward to the arrival of her newest baby sister or brother — and her parents were careful about how they shared the news.

“Charlotte is so excited to be a big sister again,” Clinton told PEOPLE. “And I think Aidan is mainly excited because his sister is excited. He just loves and looks up to his big sister so much.”

She continued, “Every day, [Charlotte] talks about the new baby. She wants to know how the baby is doing and she wants to feel the baby … Aidan, at 2½, doesn’t initiate that, but as soon Charlotte starts he’s like, ‘Oh, baby! Baby!’ And he’ll do a little dance, which is awesome.”