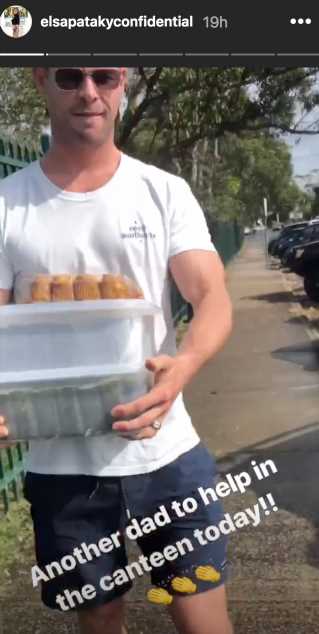 Chris Hemsworth is a dad with many talents — and that includes making his children’s school lunches!

The 35-year-old Avengers: Endgame star stopped by his children’s school on Monday to help fellow parents prepare sushi rolls for lunch. (Parents in Australia are encouraged to visit their children’s school to help out in making meals for students.)

His wife, actress Elsa Pataky shared several videos of herself and Hemsworth working together with other parents and hilariously comparing their respective piles of sushi roles just waiting to be consumed by young kids.

“I might have a bigger pile than you do right now,” Hemsworth jokingly told her as she filmed him rolling up the meals.

As he continued working, he sang, “Roll, roll, roll your boat.”

Pataky lovingly wrote, “Always helpful to have a superhero in the kitchen!!” as her husband was seen packing up containers containing lunch ingredients.

Want all the latest pregnancy and birth announcements, plus celebrity mom blogs? Click here to get those and more in the PEOPLE Babies newsletter.

Hemsworth opened up about raising their children in October, saying they had affected how he views his career and money.

“I remember saving up for a surfboard when I was younger. The surfboard was 600 bucks and I saved up for a whole year with dad’s help,” he told GQ Australia at the time. “I didn’t even want to surf on it for fear of damaging it. It taught me so many lessons about appreciation and working hard for something.”

He continued, “When I think about my kids, I don’t want them to miss that joy. Elsa and I talk a lot about how we instill that same appreciation and respect for things.”

“I don’t want them to feel like they’re privileged in any way. The fact that we have money and their parents are famous, that somehow they’re special, that scares me because we grew up with no money,” he added.

But Hemsworth said his kids have already learned the importance of having each others’ backs.

“The other day, we were in the park and something happened with Tristan and another kid. He comes over in tears. I’m like, ‘What’s wrong?’ but he didn’t want to tell me,” he said. “Sasha’s like, ‘Tristan, what happened?’ They’re four, by the way. ‘Another kid pushed me.’ Sasha goes over to this older kid, taps him on the shoulder and says, ‘Why’d you push my brother?’ I’m stood there thinking, I should step in, but this is awesome.”