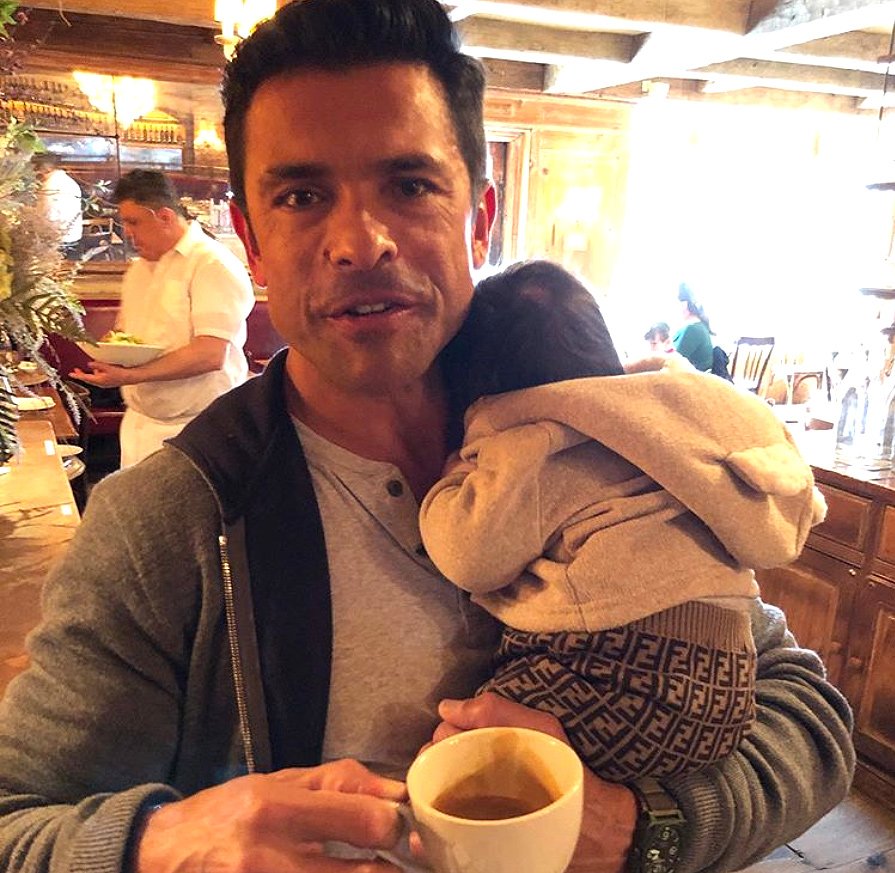 Mark Consuelos had his hands full at brunch on Tuesday.

Cohen, 50, captured the sweet moment, sharing a photo of Consuelos snapped while he held baby Benjamin up against his shoulder with his left arm and clasped a cup of coffee in his right. “I can’t blame him for burrowing into @instasuelos,” Cohen captioned the picture.

The Watch What Happens Live with Andy Cohen host also noted something else in his caption: The fact that Benjamin — who turns 2 months old on Thursday — was wearing some designer duds.

“Yes, my son is wearing @fendi pants,” Cohen wrote of Ben’s brown cotton, cashmere and wool blend bottoms, which feature a motif pattern of the “FF logo” on them. The trousers retail for $400.

“Kid stole my heart…” he commented on Cohen’s post (sweet remarks captured by Comments by Celebs). “Ben is a straight up G with those pants.”

Teased fellow Bravo star Carson Kressley: “I’m gonna put on my Fendi track pants and see if I can do the same!”

As for Benjamin cuddling into Consuelos’ arms? “I don’t blame him one bit,” joked Real Housewives of Beverly Hills star Lisa Rinna.

Cohen welcomed Benjamin, his first child, via surrogate on Feb. 4.

“It’s not something in your mind — ‘Oh, I want to do this alone.’ But I like being alone,” Cohen told PEOPLE at the time of choosing to tackle fatherhood on his own. “I didn’t want to wait. To me it would have to be a very special person to say, ‘Let’s do this together.’ And I would love that, and that person could be having coffee down the street at this moment and I’ll meet him soon.”

Since then, the Bravo star has kept fans on social media up-to-date on all pictures of Benjamin (and their adorable matching outfits).

“Sorry if I’m oversharing about the baby,” he joked in February. “I’ll calm down.”

And Consuelos isn’t the only famous friend that Benjamin has met. The baby boy has already become acquainted with a few of his dad’s other celebrity pals like Jimmy Fallon, Padma Lakshmi and Anderson Cooper.

In fact, many of those stars helped Cohen while he prepared to become a single dad for the first time, including Ripa and Sarah Jessica Parker.

“Kelly Ripa helped me find my baby nurse, who’s incredible,” Cohen told PEOPLE in February. “Sarah Jessica sat with me for three hours on a Saturday and helped me do my registry. And she lent me clothes and burp cloths that she had saved from her kids. She labeled them all. She left me a big plastic container full of things that she knew I would need.”

Parker, a mom of three, said Cohen “had all sorts of smart questions and worries and concerns.”

“We’ve talked almost daily since the decision [to have a baby] was made,” she told PEOPLE. “He’s the kind of person who takes care of every detail immediately — very organized, very committed and loyal.”