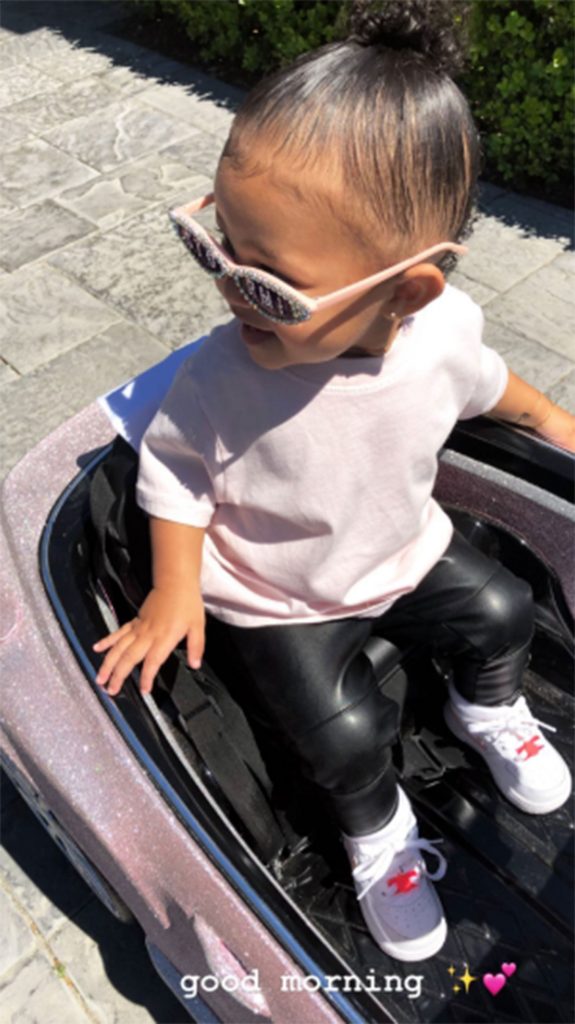 The Kardashian-Jenner family never skimps on anything — especially when it comes to their kids. Why even buy a stroller if it’s not Fendi? Mini Bentley cars? The Kardashian kids own five. Discover just how lavish of a life the Keeping Up with the Kardashian stars’ kids are living.

Stormi travels in style! The 14-month-old leaves the wheelie backpacks to the other babies and instead packs two super-custom Louis Vuitton duffles – which start at $3,850 apiece – full of her essentials.

We can’t blame Khloé’s daughter True for not wanting to share her glittery pink wheels with her cousin – which is why Stormi’s mom Kylie ordered up a similar one just for her girl from Luxury Kids Car Club. The final sticker price after all her customization (down to the “Stormi” license plate)? $3,500.

Who needs a pot of gold at the end of the rainbow when you have a mom who will spring for $550 Giuseppe Zanotti, Jr. sneakers for you (as Khloé Kardashian did for True Thompson on St. Patrick’s Day)?

Iti’s all Gucci when your baby tee is $180 (let’s hope True, with cousin Penelope, has an equally stylish bib to protect from wayward baby food stains).

Following Travis Scott’s March 2019 performance at the Barclay’s Center in Brooklyn as a part of his Astroworld — Wish You Were Here Tour, the concert venue gifted Stormi — his daughter with Kylie Jenner — with a priceless custom sports car of her own.

The tiny, multicolored vehicle says “StormiWorld” on the front, written in a graffiti font as well the phrase “Wish you were here” just above the tires — of course, a nod to Scott’s tour.

The car’s colorful design was created and handpainted on by New York artist Andrea von Bujdoss aka “Queen Andrea.”

Kim Kardashian West bought eight Louis Vuitton Speedy Mini handbags for “all of the baby girls in the fam for Xmas from Japan.” Each bag retails for a whopping $1,100.

Kylie Jenner’s daughter Stormi is sitting pretty on a chair that sells for upwards of $25,000. The limited-edition chair, created by designer brothers Humberto and Fernando Campana in collaboration with American artist Kaws, was one of three displayed at Art Basel in Miami in December.

Proud grandma Kris Jenner bought Kim and Kanye not one but three Silver Cross strollers for the sweet price of $2,699 each. Fans of the royals may recognize this luxe stroller because it’s the same one Kate Middleton was photographed pushing Princess Charlotte in during her July 2015 christening.

Khloé Kardashian’s baby girl True Thompson can’t even walk yet, but she still owns two mini Bentley cars. One is bedazzled in pink, which matches cousin Dream Kardashian’s blue Bentley, and the other is white, a gift from Kimora Lee Simmons. Simmons also gifted cousins Stormi and Chicago one white Bentley each, making that five mini Bentley cars for the Kardashian kids. The prices vary for each car, but Luxury Kids Car Club lists the Bentley starter package price at $1,999.

Kylie Jenner’s baby girl Stormi gets carried around in style in her Gucci GG Canvas Baby Carrier that retails for $395.

While wearing vintage Fendi herself, Kylie Jenner put daughter Stormi’s $12,500 Fendi stroller on display on Instagram with a caption that read, “stormi strolls ?.” (She also has a tricked-out pink stroller from CYBEX by Jeremy Scott.)

Stormi has a growing collection that would make any sneakerhead green with envy. Each shoe varies in price but the Air Jordan 3s shown in mom Kylie Jenner’s snap start at $59.99.

In “we didn’t even know they made this” news, Kris Jenner gifted Chicago a $3,350 Louis Vuitton music box for her 1st birthday.

In a January 2019 tour of her baby daughter’s closet, Kim showed off her youngest’s shoe collection, which includes little pairs of dad’s pricey designs in a rainbow of colors.