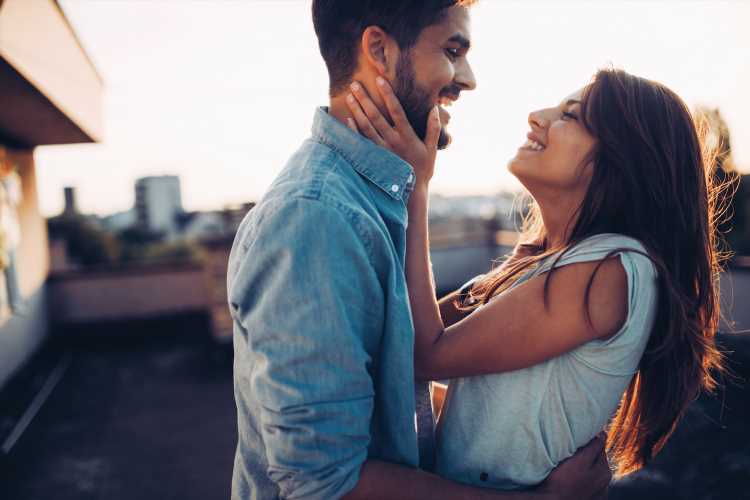 You might be in a perfectly dandy relationship in which the recycling is taken out every Sunday seamlessly, the cheese plant is watered regularly and arguments are diffused with a few tactically made in-jokes.

But, there’s always room for a touch of improvement, hey?

Out of those interviewed, 75% reported being in ‘satisfying’ relationships. Cute.

To get you feeling your significant other even more, WH tapped up Irina Firstein, a Manhattan-based couples therapist, to give us the inside scoop on making each day that bit better.

1. Kiss and touch for the sake of it

There’s something inherently gratifying about giving and receiving affection. It may or may not lead to sex, and either is fine. Just don’t plan it.

‘Many couples are too busy to touch or feel that if they do it will lead them to sex. And if they don’t have time to get physical, they don’t touch,’ Firstein says.

‘This is a huge mistake. Touching is part of broad-based eroticism and does not have to be goal oriented, but rather a playful act between partners.

2. Make coming and going an event

When you leave in the morning, don’t just yell ‘Goodbye!’ and bolt out the door.

‘Stop what you are doing when your partner leaves or returns and look at them, greet them, and give each other an embrace—the kind where you relax your bodies into one another’s. This promotes and strengthens feelings of affection and connection. It makes the other feel loved and important,’ Firstein says.

They’ll be thinking about that hug when you’re apart all day, unable to wait for similar treatment upon their return.

3. Turn off the electronics

The ultimate bond-builder? Netflix and chilling—minus the Netflix. Spend at least an hour a week hanging out with your partner without the buzz of notifications and alerts from your devices by putting them on airplane mode.

‘You need to be present, available and accessible to your partner,’ Firstein says. Without any distractions, you’ll be able to sit, talk, and enjoy each other.

Use your senses to revisit happy moments – whether that’s your partner’s perfume or aftershave that reminds you of first meeting them, or re-making the Spaghetti Vongole you shared when you were a few months in.

5. Go to sleep at the same time

Many couples get in the habit of staying up late watching TV while the other goes to bed early.

But by synching your schedules, you’ll create an element of closeness. The act of kissing goodnight in bed is very intimate. Even if it’s not possible, it’s something to strive for once a week, says Firstein.

6. Workout together, at least some of the time

Reach peak happiness levels by introducing each other to your favourite workouts (you love strength training, they dig yoga).

It’s an organic way to gain valuable insight into each other’s lives and get fit in the process. There’s truth to the saying that couples who sweat together stay together: Research from the Journal of Personal Psychology suggests that engaging in a novel activity together, as opposed to walking the dog or reading in bed, breeds heightened relationship satisfaction.

It sounds simple, but laughing is the key to couple satisfaction. Research from the University of Kansas found the more times a woman laughed at a man’s jokes, the more likely she became romantically invested.

But the pressure isn’t on him to perform standup: The real indicator of relationship success is when both parties laughed together.

Start by watching a funny YouTube video or attending a comedy show together. Forging inside jokes you can laugh about down the road breeds closeness.

8. Send a text they’re not expecting

When you’re not digitally detoxing, use your devices to your romantic benefit. Many couples get in the habit of only emailing or texting mundane questions throughout the day like: ‘we need milk.’

Once a week, surprise your partner with a spontaneous note that’s a bit more fun. It doesn’t have to be overtly sexual if that’s not who you are. As long as it’s genuine and shows you’re thinking about them. “I like the idea of surprising texts or surprises in general,” says Firstein. ‘Routine and familiarity kill romance. Newness and surprise are what make things exciting.’