A daily walk or bike ride could double a 70-year-old’s chances of living past 80, a new study finds.

Researchers from Johns Hopkins School of Medicine in Baltimore, Maryland, tested the fitness level of senor citizens by having them work on a treadmill as hard as they could.

Following up years later, they found that those who were the most physically active were twice as likely to be alive at least 10 years than those who with the lowest level.

This was regardless of whether or not the participants had any heart disease risk factors such as high blood pressure, high cholesterol, diabetes and smoking. 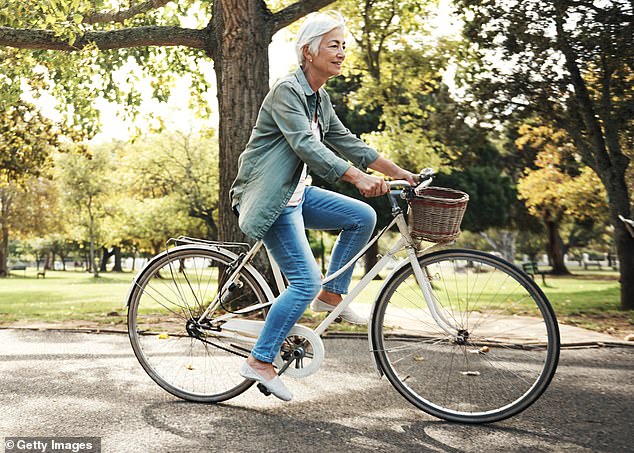 A new study from Johns Hopkins School of Medicine in Baltimore, Maryland, found the most physically active senior citizens were more than twice as likely to be alive a decade that the least active (file image)

The team says traditional cardiovascular risk factors have become so common in an aging population that they are ‘almost meaningless’ when assessing future health.

For the study, researchers looked at the medical records of more than 6,500 participants aged 70 or older between 1991 and 2009.

They had the participants take an exercise stress test by having them work out on a treadmill as hard as they could.

Participants were grouped by how much energy they exerted during the exercise and how many cardiovascular risk factors they had: zero, one, two, or three or more.

Researchers tracked them for about 10 years, during which 39 percent passed away.

They found that those with higher fitness levels were twice as likely to be alive a decade later than the least active.

Lead author, Dr Seamus Whelton, an assistant professor of medicine at Johns Hopkins School of Medicine, says the findings show that fitness is a much better predictor of survival and health.

He suggested that doctors need to start incorporating fitness into their patient visits: ask about their exercise routines, and even assess them running on a treadmill or pedaling a stationary bike.

‘Assessing fitness is a low-cost, low-risk and low-technology tool that is underutilized in clinical practice for risk stratification,’ Dr Whelton said.

‘This finding emphasizes the importance of being fit, even when you’re older.’

The new research is the latest to show that fitness later in life can lengthen a person’s lifespan.

A study last month from Columbia University in New York found that 60-year-olds who did regular aerobic exercise had grey matter that was equivalent to that of a 40 year-old.

The team, from the Taub Institute for the Research on Alzheimer’s Disease and the Aging Brain, said at the time it could provide a non-pharmaceutical method to reduce the risk of dementia.

‘People who aren’t exercising or are sedentary would likely benefit from starting a routine of low- to moderate-intensity exercise, though they should talk with their physician first,’ Dr Whelton said.

The new study will be presented at the American College of Cardiology’s 68th Annual Scientific Session, which is being held March 16-18 in New Orleans, Louisiana.