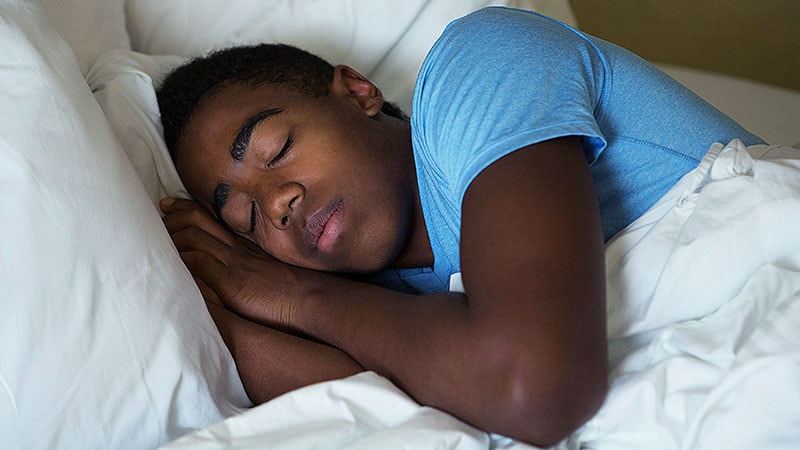 Sleeping well through the night is associated with a lower risk for cardiac arrhythmias, new research suggests.

In a large population study with more than 400,000 patients, researchers found a healthy sleep pattern was associated with lower risks for atrial fibrillation (AF) and bradyarrhythmias.

The study was published online September 13 in the Journal of the American College of Cardiology.

The researchers, led by Xiang Li, MD, PhD, also from Tulane University, looked at the sleep patterns of 403,187 people in the large prospective UK Biobank database, which contains genetic and health information on half a million British people.

Participants completed a touchscreen questionnaire about their sleep behavior. A healthy sleep pattern was defined by chronotype (are you a morning or evening person?), sleep duration, insomnia, snoring, and daytime sleepiness.

Each sleep factor was coded 1 if it was considered healthy and 0 if it was not. The sum of five sleep factors was used to calculate a sleep-pattern index score.

The researchers found a progressively higher incidence of AF and bradyarrhythmia as sleep pattern scores got progressively worse.

This held true after adjustment for demographic, lifestyle, and genetic risk factors.

One strength is the size of the databank. This allows researchers to generate and test a hypothesis and also enables them to use clinically available information to answer important research questions, Kadish and Jacobson write.

“The strength of the study is that it had a very large population, and used a sophisticated analysis of sleep factors, but essentially the study is hypothesis-generating, rather than being definitive, because of a couple of significant weaknesses,” Kadish told theheart.org | Medscape Cardiology.

“It would have been much more helpful to know the type and duration of AF, the severity of bradyarrhythmia, and the types of VA, all of which were not available because this was a large population study,” he said.

Kadish also noted that this is an association study and so can’t establish causation. Some things that might cause disordered sleep, such as psychological stress, could cause an arrhythmia and the presence of a sleep disorder may simply be an epiphenomenon, Kadish said.

These large population-based analyses are worth doing, he added, as long as they are interpreted properly.

“There are things you can learn by having very large populations to generate hypotheses, which you would never be able to do if you studied a thousand patients in a clinical trial. Here, the authors show that atrial fibrillation may be due to subtle kinds of sleep disorders,” he said. “In order to validate this study, we would need to see if improving the sleep quality in people with afib improves their afib.”

“Large population studies provide a signal that there is something to look into,” he added. “There are those who are arguing these days that big-data population studies can answer real-world questions, in the absence of a randomized trial, and the jury is still out as to whether there has been a gain in acceptance of that view. For example, will the FDA ever approve a drug or a therapy without a randomized trial?”

“That’s still up in the air, but what I would say is that, just like with anything else, the quality of the population study matters,” Kadish concluded. “This study didn’t have the sophistication to be anything but hypothesis-generating, in my view.”