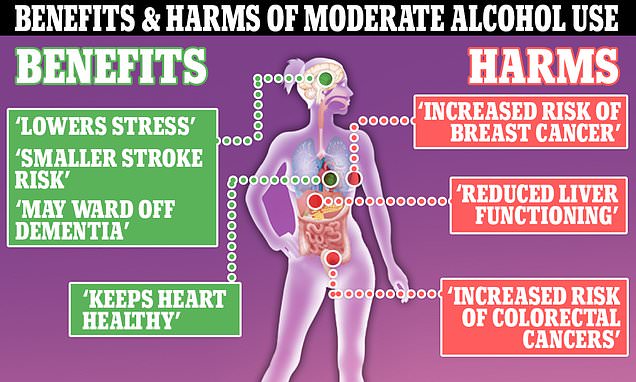 Sober October warning: As new research suggests abstaining from alcohol might RAISE the risk of dementia, can a drink a day actually be good for you?

You’d be forgiven for assuming Sober October is a positive trend to get involved with for your health — and virtually every doctor would agree with you.

But a recent review of available studies indicated that abstaining from alcohol completely may actually raise the risk of dementia.

That research, published in he journal Addiction in August, has reignited a debate about whether a small amount of alcohol could actually be good for your health.

Many doctors wrote off the findings as incorrect or misleading. But they are not a total anomaly, with past studies also linking zero tolerance to higher levels of heart disease, stroke and Alzheimer’s.

What is undisputed is that consuming high levels of alcohol over a long period of time and binge drinking can lead to a slew of chronic conditions.

But some scientists believe that in small doses, it can provide just enough of a relaxing effect to counter stress – which can lead to inflammation and heart and artery damage.

The Mayo Clinic, for example, says the equivalent of one small glass of wine or two bottles of beer per day can be beneficial.

But Dr Robert Friedland, a professor of neurology and member of the American Neurological Association, told DailyMail.com that there are for more studies showing how bad alcohol is.

He said the relative rare results should not be misinterpreted as a reason for someone to increase their alcohol consumption.

The debate comes just before millions will lock their liquor cabinet for ‘Sober October’ – a trend where many who regularly drink choose to abstain for a month. 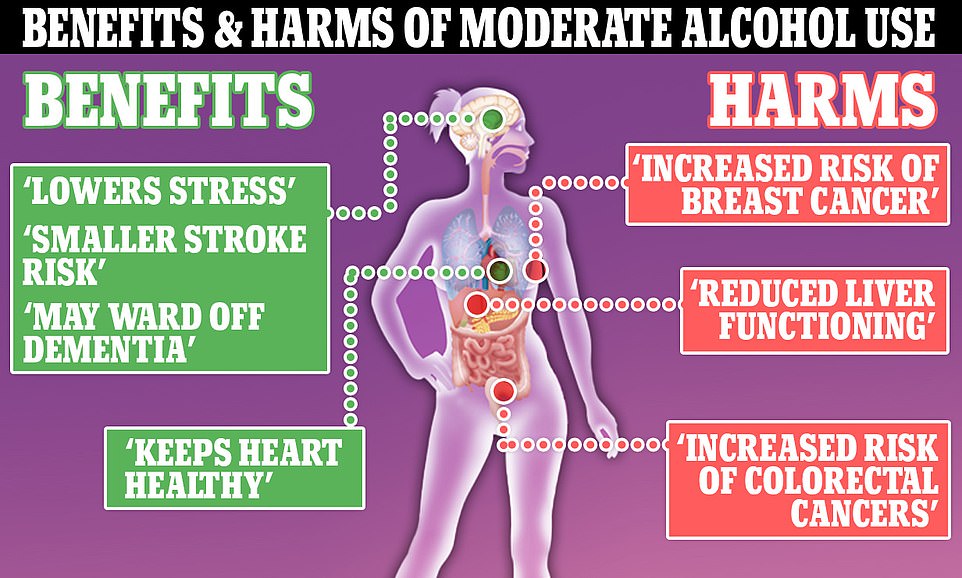 So what does the science say when it comes to low amounts of alcohol?

In the latest study, researchers at the University of New South Wales, in Sydney, Australia, performed a meta-analysis on 15 studies analyzing the link between alcohol consumption and risk of developing dementia.

Over the course of the studies – which included data from 24,478 participants across the world – 2,124 developed dementia.

The researchers found that people who abstained from alcohol were more likely to be a part of that group than those that drank moderately.

A majority of the studies were concentrated in high income nations in Europe, the US and Australia. Data from Brazil and the Republic of Congo were included to represent middle and lower-income nations as well.

The analysis did not establish a mechanism for why moderate drinking could potentially boost brain health – and did not adjust for other outside factors that could instead impact the results like diet, exercise habits and weight.

But the idea that small amounts of alcohol on occasion can be good for one’s health has emerged in research over the last two decades.

Alcohol interferes with the brain’s ability to communicate with the rest of the body – which gives a person the intoxicated feeling.

Abuse can permanently damage some communication pathways and cause cognitive damage as a result.

But in low doses the intoxicating feeling can provide temporary stress relief, act as a social lubricant and boost confidence.

A study published by a Dutch research team in 2002 found that one-to-three drinks per day could reduce dementia risk in people 55 and older.

Researchers at Erasmus Medical Centre, who published their findings in The Lancet, gathered data from nearly 8,000 people in the age cohort.

Participants that had moderate drinking habits were 42 per cent less likely to develop dementia within six years than their peers.

The Dutch team even found that what type of alcohol a person preferred – whether wine, beer or liquor – did not affect the results.

Alcohol is known to have many harmful affects on the body, as its presence in the blood stream can damage organs, prevent some crucial bodily functions form properly working.

It can also damage a person’s DNA, and as a result lead to genetic mutations that could cause cancer.

Frequent alcohol use long-term has also been linked to high blood pressure, an irregular heartbeat and a weakened heart muscle.

Yet, researchers from Columbia University found in a 2006 study that drinking each week slowed the rate of cognitive decline and boosted heart health in adults.

Dubbed the ‘Northern Manhattan Study’ the research of 1,428 participants found that participants who either drank one drink a week, or two-or-more weekly, had lower rates of cognitive decline.

They also did not exhibit signs in the heart that indicate future cognitive decline. Other studies have also found positive correlation between moderate alcohol use and heart health.

A study led by Massachusetts General Hospital, published in JAMA Network Open earlier this year, found that moderate drinkers had lower rates of heart disease than their abstaining peers.

Using data from the UK Biobank, they found that light drinkers were around 20 per cent less likely to suffer the condition – which is also the leading killer of Americans.

Like the brain health studies, the findings were observational and did not determine a reason why alcohol could be good for the heart.

A 1999 study published in the New England Journal of Medicine found that drinking each week could reduce risk of a brain hemorrhage by around 20 per cent.

The Brigham and Women’s Hospital team even found that people who consume one alcoholic drink each day had similar levels of risk to those who have one per week.

A mechanism for why those who abstain suffered a higher risk of a stroke was not determined.

Challenges like ‘Sober October’ task people with abstaining from using alcohol for the entire month in an effort to move away from the substance that has become all-too- prevalent in some people’s lives.

The Australian researchers gathered data from 15 separate studies which each gauged a person’s risk of developing dementia depending on their alcohol use.

Nearly 25,000 participants were included across the body of studies.

Of that group, moderate drinkers were found to have a lower risk of dementia than those that did not drink at all.

Dr Amit Sachdev, director of the Division of Neuromuscular Medicine at East Lansing’s Michigan State University, told DailyMail.com he believes that people who are abstaining are having their cognitive health damaged by an outside factor – like poor diet and exercise habits.

He notes that obesity and diabetes – which have both reached near-crisis mode in the US – are also a risk factors for many cancers and could be throwing off the data.

Countries like the US are dealing with exorbitant rates compared to peers abroad. Both conditions are tied to an increased likelihood of developing dementia.

The Centers for Disease Control and Prevention reports that over 40 per cent of Americans are obese, and around 10 per cent of adults are diabetic.

Dr Sarah Andrews, an assistant professor of psychiatry at Johns Hopkins University, in Baltimore, Maryland, told DailyMail.com said the findings are surprising – and hopes they are not spread widely as an established truth.

But the experts all agreed that moderate drinking is fine for cognitive health – and some studies have found that the occasional drink could be a boost for the heart or brain.

Dr Friedland said that it is the most comprehensive study ever on the topic, but warns that no doctor would recommend a person to increase alcohol consumption – especially for a person that does not already drink.

Dr Sachdev explains that alcohol abuse causes a person’s brain matter to shrink – leading to issues with memory and cognitive processing as a result.

‘[Alcohol abuse] will cause the brain to atrophy or shrink,’ he explained.

‘In the long run that can result in dementia, people can have problems with memory, sequencing, coordination, behavior.’

Dr Andrews says that moderate alcohol users are under no significant risk of developing dementia – both those who binge drink or suffer from alcoholism should worry.

Dr Friedland notes that while the overall findings of the Australian study pointed to the benefits of moderate drinking – this was not the case for analysis of North America in particular. 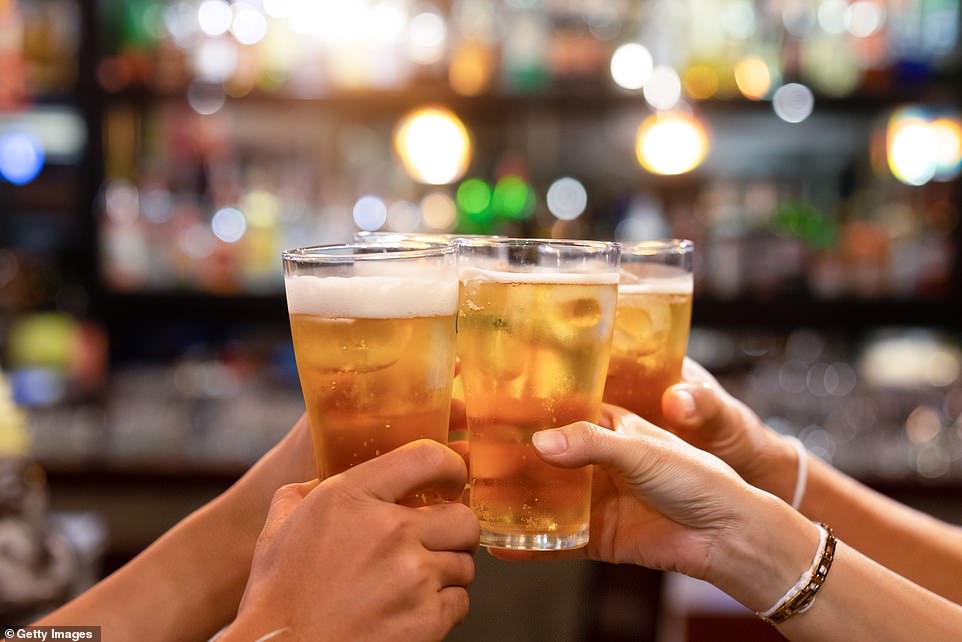 Multiple studies have found that there are cognitive benefits to moderate alcohol assumptions, but experts believe that there are other factors at play the studies may not be accounting for (file photo) 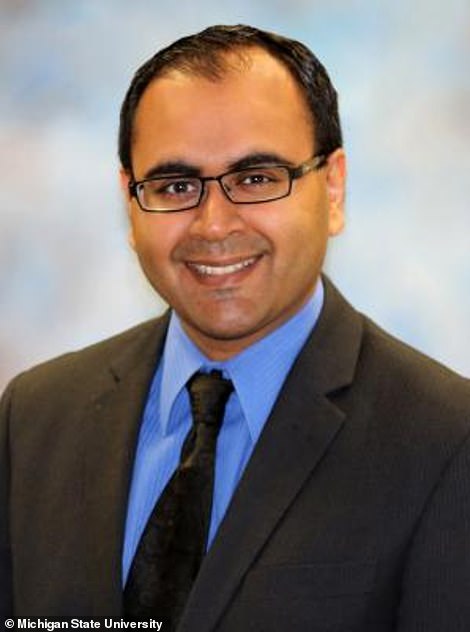 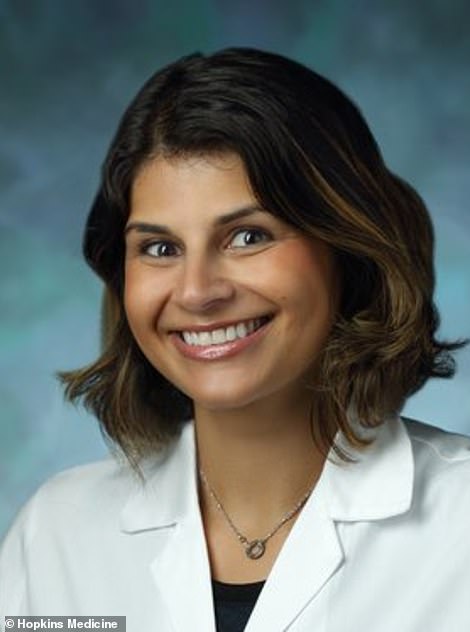 Dr Amit Sachdev (left), director of the Division of Neuromuscular Medicine at Michigan State, said that he does not believe the findings of the Australian study. Dr Sarah Andrews (right), an assistant professor of psychiatry at Johns Hopkins, said that the study points out a correlation, but does not give a concrete reason why alcohol use would be beneficial for the brain

Could moderate drinking be good for you? Multiple studies say so

Multiple studies in recent decades have found that moderate drinkers may have better cognitive health.

A 2002 study from Erasmus Medical Centre in Holland found that one to three drinks per day could reduce risks of dementia in people over 55.

A team led by Italian researchers found in 2020 that there was no increased Alzheimer’s risk associated with red wine consumption.

In August, Australian researchers performed a meta-analysis finding that moderate drinkers were at a lower risk of developing dementia than those who abstained from alcohol.

He also believes that diet may be a key factor that the researchers missed.

If a person is having one drink each night alongside a health dinner filled with foods that boost brain health – then it is likely that the food is really what is helping the brain.

He points out the success of the Mediterranean diet in many studies. Moderate red wine consumption is a staple of the diet that is also associated with brain health.

In this case, he says, healthy foods like salmon are actually responsible for the decreased risk of Alzheimer’s – not the wine itself.

Dr Sachdev does not see any issue with moderate drinking if done responsibly, though.

‘I think that someone who is a responsible user of alcohol doesn’t have to be significantly concerned about positive or negative alcohol affects on their brain,’ he said.

Dr Andrews points out that the study just establishes a correlation, but does not point out a reason why not drinking could harm the brain – or a reason why moderate drinking would help.

For a person that significantly abuses alcohol, taking a month off from drinking could help them establish better habits – saving their brain some trouble as a result.

‘[Abstinence] can have an impact on their cognitive function,’ she said.

‘[Decline] can be decreased with abstinence with alcohol. [Sober October] can reverse some of these affects. But limiting the use for significant periods of time is most effective.’

She also worries that a person who reads this research could get the wrong message, and believe that they should increase alcohol intake.

‘People will hang on to what they think is ok… but there might be more to the story,’ Dr Andrews said.