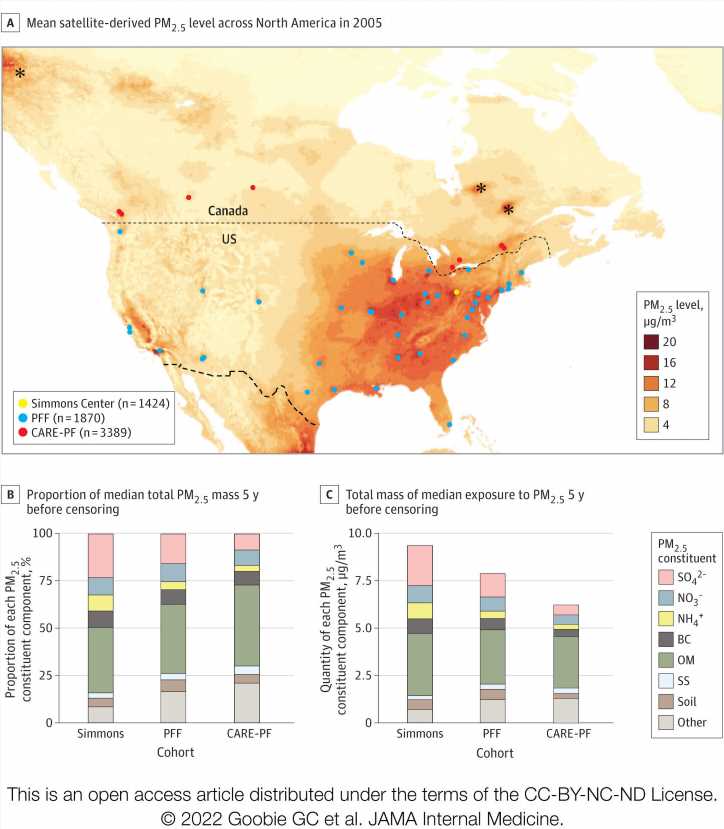 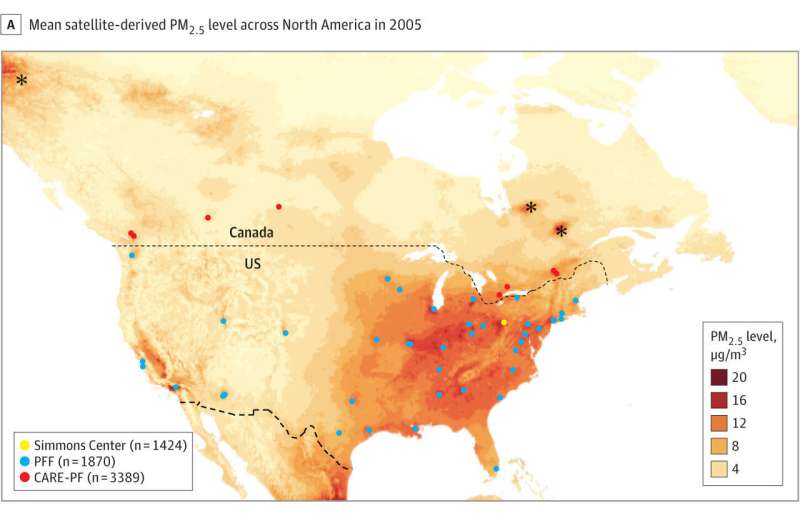 People with a disease characterized by lung scarring that has no obvious cause are more likely to die if they live in areas with higher levels of air pollution composed of chemicals associated with industrial sources and vehicular traffic, according to new research led by University of Pittsburgh scientists.

The study, published today in JAMA Internal Medicine, is the first to link the chemical composition of fine particulate air pollution to worsened fibrotic interstitial lung disease (fILD) outcomes. It is also the largest study ever done to evaluate the impact of air pollution on these patients.

“Some people with these lung diseases have an expected lifespan from diagnosis to death of only a few years, and yet it’s a mystery as to why they developed the disease, why their lungs become so scarred,” said lead author Gillian Goobie, M.D., doctoral candidate in the Pitt School of Public Health’s Department of Human Genetics. “Our study points to air pollution—specifically pollutants from factories and vehicles—as potentially driving faster disease progression and premature death in these patients.”

Goobie and her team obtained data from 6,683 patients with fILDs in the U.S. and Canada and linked their home addresses with satellite and ground-monitoring air pollution data to determine air pollutant composition to an accuracy of less than half a mile.

The team specifically looked at a pollutant known as PM2.5, which refers to particulate matter that measures less than 2.5 microns across, a size invisible to the naked eye. This type of pollution is so small that it can infiltrate deep into the lungs and even cross into the blood stream, where it can contribute to other diseases outside of the lungs, such as heart disease.

“In the past, most environmental health research has focused on the simple definition of PM2.5 as anything of that size,” said co-author James Fabisiak, Ph.D., associate professor in Pitt Public Health’s Department of Environmental and Occupational Health. “But PM2.5 is chemically diverse, with a different composition depending on whether it came from a forest fire or a tailpipe. Research has lacked in determining if the type of PM2.5 matters when it comes to health effects. Our new research is a big step toward filling in that knowledge gap.”

The team found that increasing levels of PM2.5 were linked to more severe disease at diagnosis, faster disease progression as measured by lung function decline and higher likelihood of dying sooner. Pollution high in sulfate (typically produced by factories, such as the coal and steel industries), nitrate (primarily from fossil fuel combustion) and ammonium (usually produced by industry or agriculture) were associated with worse outcomes, whereas chemical signatures from more naturally occurring particulate matter—such as sea salt or soil dust—didn’t carry as high of an association.

After pollution leaves a smokestack or tailpipe, Goobie noted that sulfate- and nitrate-containing aerosols can be formed in the atmosphere from those and other gaseous pollutants and can be acidic, which can be very damaging to the tiny air sacs of the lungs.

The team is now doing laboratory studies looking at the impact of these pollutants on lung cells at the molecular level to better understand why they are particularly damaging to the lungs of certain people and whether exposure to the pollutants triggers changes to how certain genes work that could cause runaway scarring.

According to the team’s calculations, if exposure to industrial pollutants hadn’t occurred, most premature deaths among participants living in areas of North America with a heavier burden of industry—including Pittsburgh—could have been avoided. Participants of color were disproportionately exposed to higher levels of man-made air pollutants: 13% of the high-exposure group were non-white, but only 8% of the low-exposure group, highlighting the impact of environmental injustice in these findings as well.