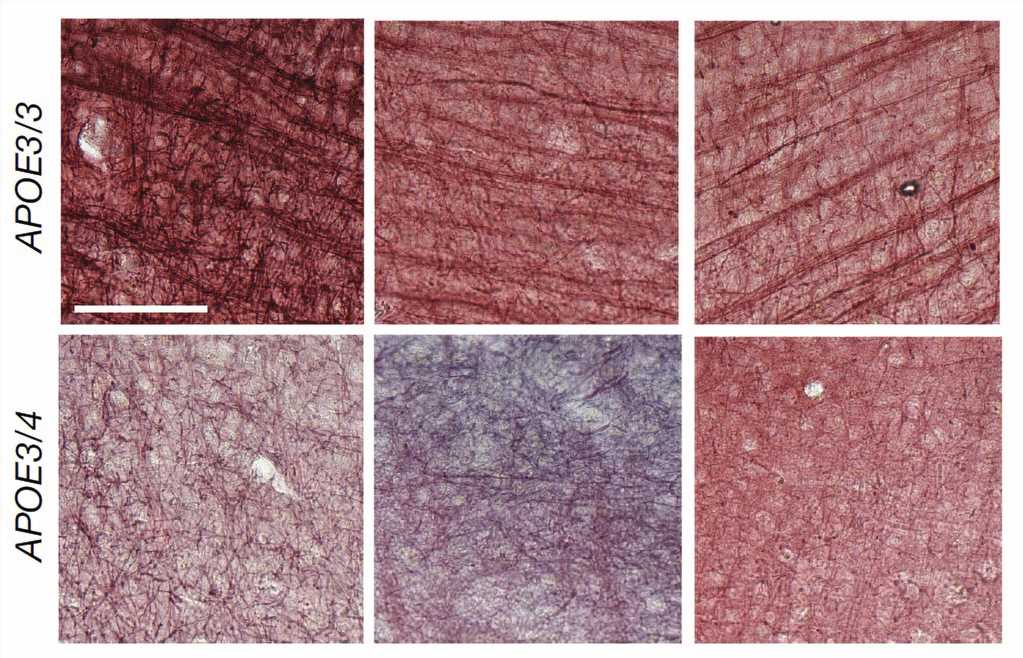 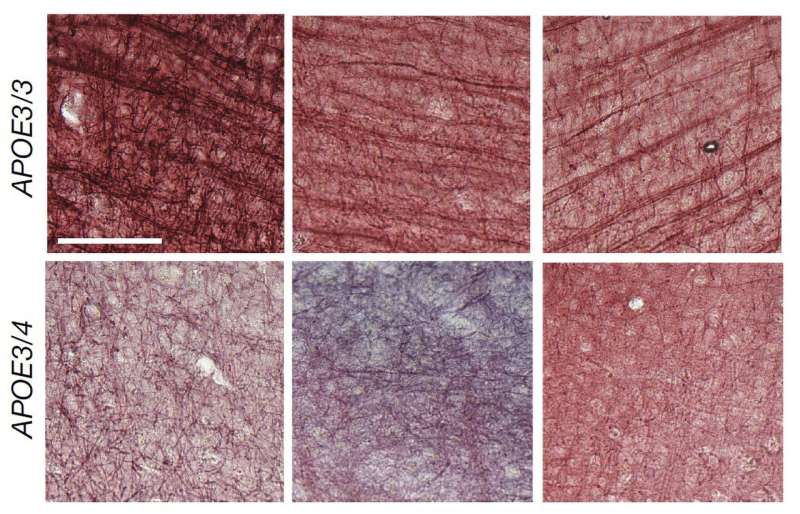 It’s well known that carrying one copy of the APOE4 gene variant increases one’s risk for Alzheimer’s disease threefold and two copies about tenfold, but the fundamental reasons why and what can be done to help patients remain largely unknown. A study published by an MIT-based team Nov. 16 in Nature provides some new answers as part of a broader line of research that has demonstrated APOE4’s consequences cell type by cell type in the brain.

The new study combines evidence from postmortem human brains, lab-based human brain cell cultures, and Alzheimer’s model mice to show that when people have one or two copies of APOE4, rather than the more common and risk-neutral APOE3 version, cells called oligodendrocytes mismanage cholesterol, failing to transport the fat molecule to wrap the long vine-like axon “wiring” that neurons project to make brain circuit connections. Deficiency of this fatty insulation, called myelin, may be a significant contributor to the pathology and symptoms of Alzheimer’s disease because without proper myelination, communications among neurons are degraded.

Recent studies by the research group, led by Picower Professor Li-Huei Tsai, director of The Picower Institute for Learning and Memory and the Aging Brain Initiative at MIT, have found distinct ways that APOE4 disrupts how fat molecules, or lipids, are handled by key brain cell types including neurons, astrocytes and microglia. In the new study as well as in those, the team has identified compounds that appear in the lab to correct these different problems, yielding potential pharmaceutical-based treatment strategies.

The new study extends that work not only by discovering how APOE4 disrupts myelination, but also by providing the first systematic analysis across major brain cell types using single nucleus RNA sequencing (snRNAseq) to compare how gene expression differs in people with APOE4 compared to APOE3.

“This paper shows very clearly from the snRNAseq of postmortem human brains in a genotype specific manner that APOE4 influences different brain cell types very distinctly,” said Tsai, a member of MIT’s Brain and Cognitive Sciences faculty. “We see convergence of lipid metabolism being disrupted, but when you really look into further detail at the kind of lipid pathways being disturbed in different brain cell types, they are all different.

“I feel that lipid dysregulation could be this very fundamental biology underlying a lot of the pathology we observe,” she said.

The paper’s lead authors are Joel Blanchard, an assistant professor at Mt. Sinai’s Icahn School of Medicine who began the work as a postdoc in Tsai’s MIT lab, Djuna Von Maydell and Leyla Akay, who are graduate students in Tsai’s lab, and Jose Davila Velderrain, a research group leader at Human Technopole and former postdoc in the lab of co-corresponding author Manolis Kellis, Computer Science Professor at MIT.

Many methods to examine myelination

Postmortem human brain samples came from the Religious Orders Study and the Rush Memory and Aging Project. The team’s snRNAseq results, a dataset that von Maydell has made freely available, encompasses more than 160,000 individual cells of 11 different types from the prefrontal cortex of 32 people—12 with two APOE3 copies, 12 with one copy of each APOE3 and APOE4, and eight with two APOE4 copies. The APOE3/3 and APOE3/4 samples were balanced by Alzheimer’s diagnosis, gender, and age. All APOE4/4 carriers had Alzheimer’s and 5 of 8 were female.

Some results reflected known Alzheimer’s pathology, but other patterns were novel. One in particular showed that APOE4-carrying oligodendrocytes exhibited greater expression of cholesterol synthesis genes and disruptions to cholesterol transport. The more APOE4 copies people had, the greater the effect. This was especially interesting given results from a prior analysis by Tsai’s and Kellis’s labs in 2019 that linked Alzheimer’s disease to reduced expression of myelination genes among oligodendrocytes.

Using a variety of techniques to look directly at the tissue, the team saw that in APOE4 brains, aberrant amounts of cholesterol accumulated within cell bodies, especially of oligodendrocytes, but was relatively lacking around neural axons.

To understand why, the team used patient-derived induced pluripotent stem cells to create lab cell cultures of oligodendrocytes engineered to differ only by whether they had APOE4 or APOE3. Again APOE4 cells showed major lipid disruptions. In particular, the afflicted oligodendrocytes hoarded extra cholesterol within their bodies, showed signs that the extra internal fats were stressing organelles called the endoplasmic reticulum that have a role in cholesterol transport, and indeed transported less cholesterol out to their membranes. Later when they were co-cultured with neurons, the APOE4 oligodendrocytes failed to myelinate the neurons as well as APO3 cells did, regardless of whether the neurons carried APOE4 or APOE3.

The team also observed that in post-mortem brains there was less myelination in APOE4 carriers than APOE3 carriers. For instance, the sheaths around axons running through the corpus callosum (the structure that connects brain hemispheres) were notably thinner in APOE4 brains. The same was true in mice engineered to harbor human APOE4 vs. those engineered to have APOE3.

Eager to find a potential intervention, the team focused on drugs that affect cholesterol including statins (which suppress synthesis) and cyclodextrin, which aids cholesterol transport. The statins didn’t help, but applying cyclodextrin to APOE4 oligodendrocyte cultured in a dish reduced accumulation of cholesterol within the cells and improved myelination in co-cultures with neurons. Moreover, it also had these effects in APOE4 mice.

Finally, the team treated some APOE4 mice with cyclodextrin, left others untreated, and subjected them all to two different memory tests. The cyclodextrin-treated mice performed both tests significantly better, suggesting an association between improved myelination and improved cognition.

“It’s encouraging that we’ve seen a way to rescue oligodendrocyte function and myelination in lab and mouse models,” Tsai said. “But in addition to oligodendrocytes, we may also need to find clinically effective ways to take care of microglia, astrocytes, and vasculature to really combat the disease.”