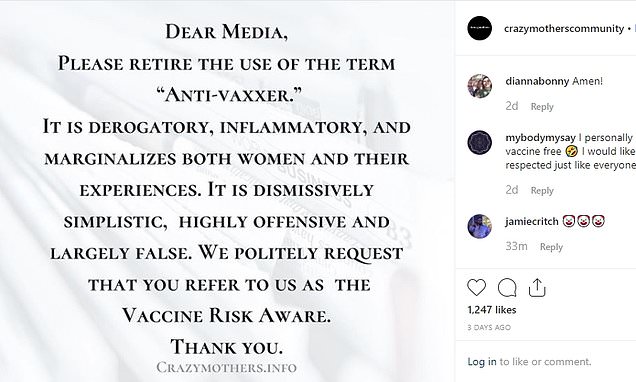 An anti-vaccine group called CrazyMothers has issued a plea to retire the term ‘anti-vaxxers’ because ‘derogatory’.

In social media posts on Sunday, the group said it is ‘dismissivemy [sic] simplistic, highly offensive and largely false’ to call them ‘anti-vaxxers’ despite the fact that their members oppose vaccinations.

The group’s philosophy hinges on debunked studies linking vaccines to diseases and disorders such as autism, a theory peddled by disgraced British doctor Andrew Wakefield, whose work on the subject has been pulled from every journal it was published in.

In their plea, CrazyMothers suggested their new nickname could be ‘Vaccine Risk Aware.’ 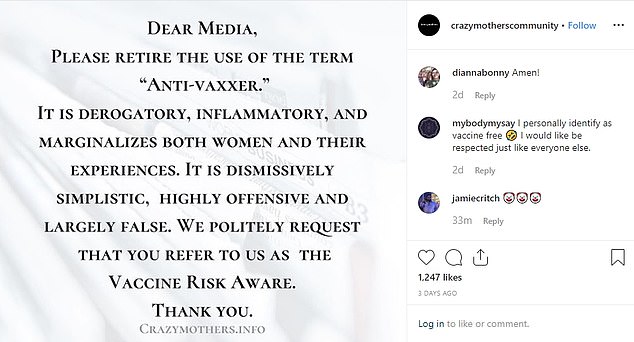 CrazyMothers posted a plea on Sunday saying it is ‘dismissivemy [sic] simplistic, highly offensive and largely false’ to call them ‘anti-vaxxers’ despite the fact that their members oppose vaccinations 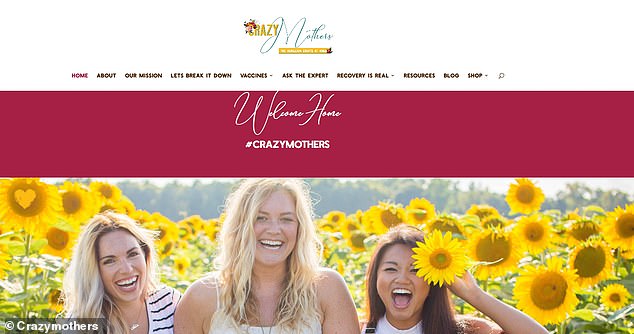 ‘It’s supposed to be derogatory,’ one Twitter user wrote.

‘Anti-vaxxers threaten the lives of children, their own & more importantly other children. Their anti-science extremists who ignore experts & have a delusional sense of their own of their own intellectual & moral significance. They should be mocked.’

Another said: ‘1. Anyone can be “vaccine risk aware”, the vast majority take vaccines as they are “disease risk aware”. 2. “Vaccine hesitant” describes those who are unsure/reluctant and ask questions. “Anti-vaxxers” are those who actively campaign to prevent others from having their vaccines’

Another wrote: ‘”Self-indulgent conspiracy theorist divorced from objective reality” would be more accurate.’

One said: ‘Deaf guy here. For deaf people of my generation, the #1 cause of *permanent* deafness was measles. When you see an older person signing in ASL, just remember they spent a lifetime like that because there WAS NO VACCINE. Now it’s happening again because of DELIBERATE anti-vax BS.’

One of CrazyMothers’ primary concerns is the debunked link between vaccines and autism. A 10-year study published earlier this year added to decades of literature finding no connection between the two.

What’s more, doctors warn that, for many conditions, particularly viruses like measles, vaccines are the only form of treatment.

The advent of antibiotics provided an answer to bacterial infections. But, despite decades of research, scientists have struggled to find an effective response to viruses.

After the MMR vaccine was invented, rates of measles deaths plummeted.

The recent outbreaks of measles that swept the United States occurred in neighborhoods with low rates of vaccination.

Speaking to DailyMail.com, Dr Anthony Fauci, head of infectious diseases at the National Institutes of Health (NIH) sighed when asked about reluctance to vaccinate. 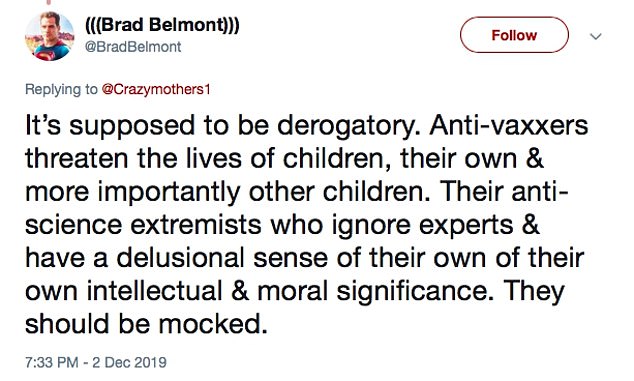 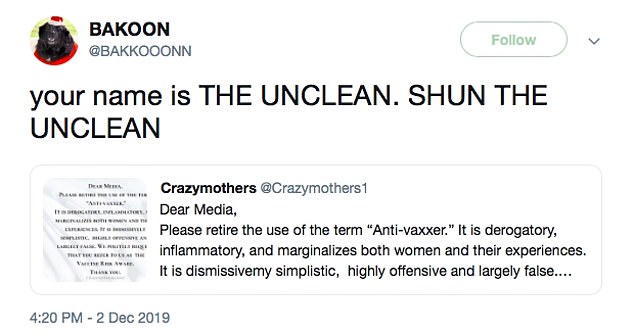 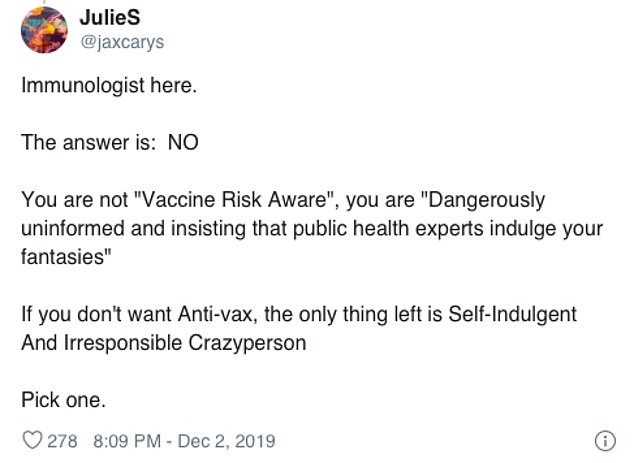 The NIH is pouring efforts and funds into designing a vaccine to protect people from the notoriously elusive flu, which mutates every year as it moves from humans to migrating birds and back again.

The measles vaccine, he said, is easy: ‘It’s a one-and-done.’

‘Everyone should be vaccinated. Period,’ Dr Fauci said.

‘I can’t imagine seeing us win that fight in one part of the world, only to see us start losing it in another,’ he adds.