Down syndrome, also known as Trisomy 21, is the most common chromosomal abnormality causing developmental delay and intellectual disability, and it can be identified in utero. Many pregnant women seek to determine whether their fetus has this abnormality.

Now, researchers from the Institute of Automation of the Chinese Academy of Sciences (CASIA) have developed an intelligent prediction model to achieve non-invasive screening of Down syndrome using ultrasound imaging.

This work was published in JAMA Network Open on June 21.

For decades, ultrasound images have been widely used for screening fetuses for Down syndrome due to the method’s safety, convenience, and low cost. However, using common ultrasound indicators, detection accuracy is less than 80% in actual ultrasound examinations.

Invasive methods such as villus biopsy, amniocentesis, and fetal umbilical venipuncture are also commonly used to detect Down syndrome.

In this study, the researchers developed a convolutional neural network (CNN) to construct a deep learning (DL) model that could learn representative features from ultrasound images in order to identify fetuses with Down syndrome.

A CNN is a deep learning algorithm that can take an input image, assign importance (i.e., learnable weights and biases) to various aspects/objects within the image and differentiate one from the other. A CNN can have tens or hundreds of hidden layers. The first layer learns how to detect edges and the last one learns how to detect more complex shapes. This research involved 11 hidden layers. 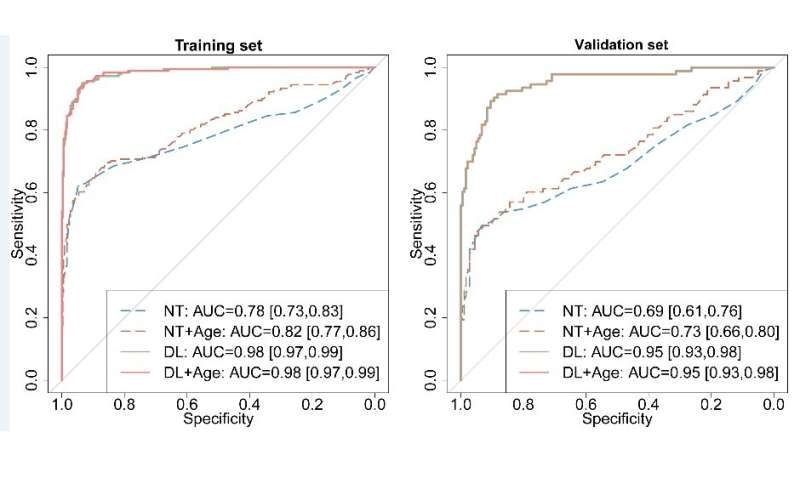 To further interpret the DL model in a human-readable form, the researchers also used a class activation map (CAM) to shed light on what the model focused on and how it explicitly enabled the CNN to learn discriminative features for risk scores.

The researchers used two-dimensional ultrasound images of the midsagittal plane of the fetal face between 11 and 14 weeks of gestation. Each image was segmented with a bounding box to show only the fetal head. The study comprised a total of 822 cases and controls, with 550 participants in the training set and 272 participants in the validation set.

The researchers found that the first five levels of feature maps visualized by CAM vividly showed the process of learning representative features. The CAM applied to the final layer showed the visualized response regions for the model’s decision-making.

“This non-invasive screening model constructed for Down syndrome in early pregnancy is significantly superior to existing, commonly used manual labeling markers, improving prediction accuracy by more than 15%. It’s also superior to the current conventional invasive screening method for Down syndrome based on maternal serum,” said Tian Jie, corresponding author of the study.