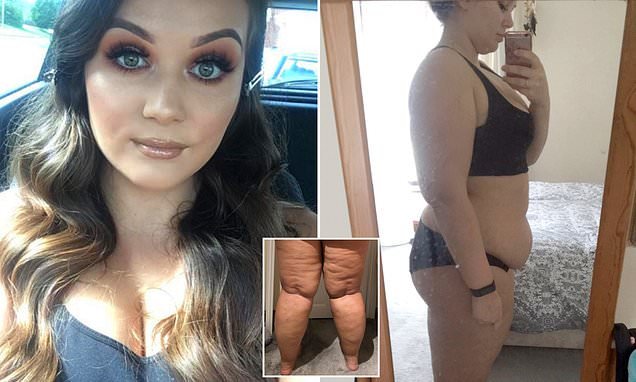 Avid swimmer, 20, claims doctors accused her of ‘secret eating’ after medical condition caused her to pile on eight stone

An avid swimmer claims doctors accused her of ‘secret eating’ when a medical condition saw her pile on eight stone of fat.

Clodagh Moane was only diagnosed with lipoedema in January, after spending 18 months trying to convince doctors the extra fat was not her fault.

The 20-year-old felt ‘trapped inside someone else’, and, to this day, is in constant pain from the rapid fat build-up in her body.

Miss Moane, from Birmingham, claims she faces being in a wheelchair before she is 30, having been told by a doctor her condition is very advanced for her age.

Her family are desperately trying to raise £70,000 for her to have surgery to remove the fat, after her local NHS trust refused funding. 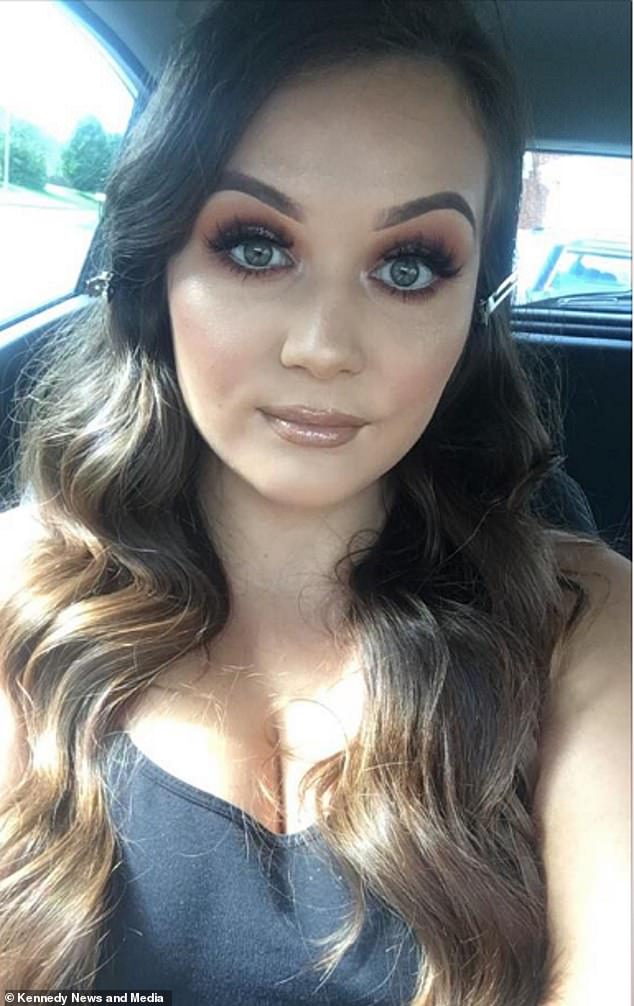 Clodagh Moane, 20, claims doctors accused her of ‘secret eating’ when a rare condition saw her pile on eight stone of fat – no matter how much she exercised 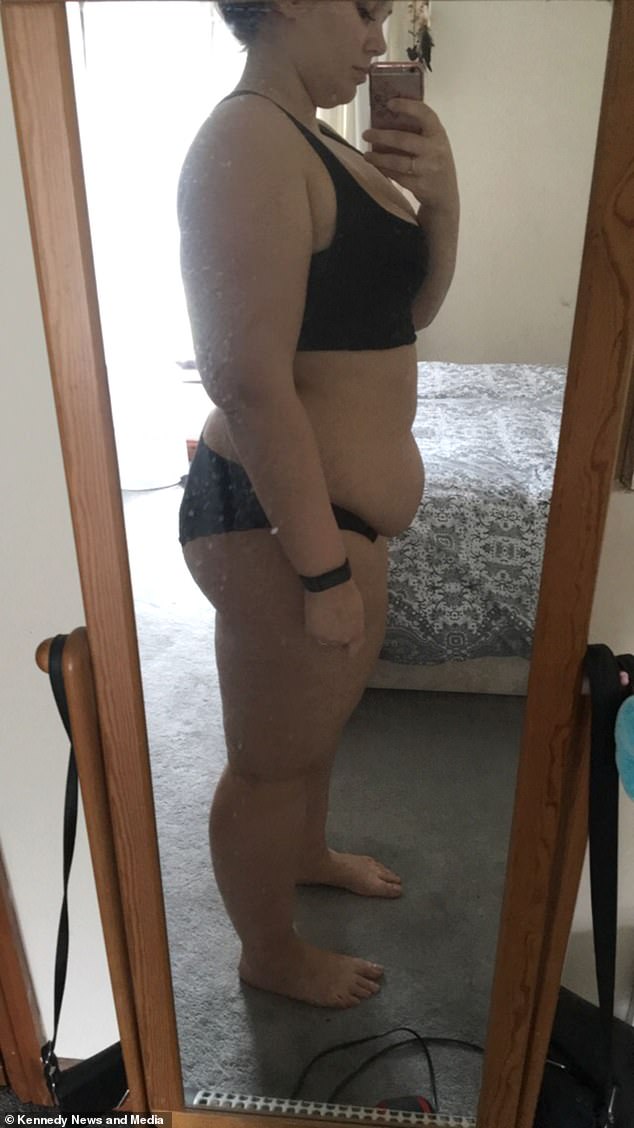 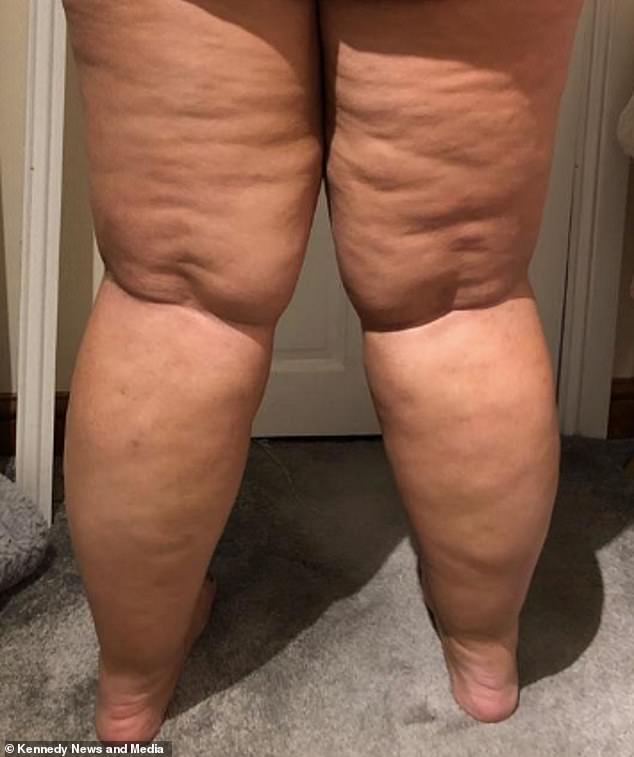 Miss Moane’s legs and arms began ballooning two years ago, until eventually her dress size had shot up seven sizes and her weight from 11st (69.8kg) to more than 19st (120.7kg)

Miss Moane claims you can see her body change ‘week by week’ and is now too embarrassed to leave her house other than for her job in recruitment.

She said: ‘The way I have to describe it to people is like I am trapped inside someone else.

‘That’s the only way I can describe the way it feels. I just don’t feel like the same person at all.

‘I show people pictures of what I used to look like then and they can’t believe the difference.’

The abnormal fat build-up is distributed across Miss Moane’s arms and below her waist, including buttocks, thighs and legs.

The condition, which is estimated to affect 11 per cent of women worldwide, creates an ‘overhang’ on her ankles and wrists, where fat is not distributed.

At first, doctors allegedly dismissed her weight gain as part of polycystic ovary syndrome (PCOS) in 2017 – but medication didn’t stop the fat gain.

Miss Moane claims doctors said they didn’t believe her and insisted she was secretly eating unhealthy food or had a history of obesity in her family – both of which she denied.

Miss Moane said: ‘They made me go and see a dietitian because they just thought I was overweight and I didn’t want to admit it, even though I was telling them I shouldn’t be overweight. It was really frustrating.

‘A few of the doctors made really unprofessional comments about it as well. One said “you need to be honest about it, do you just like having a few pizzas?”. I was fuming. 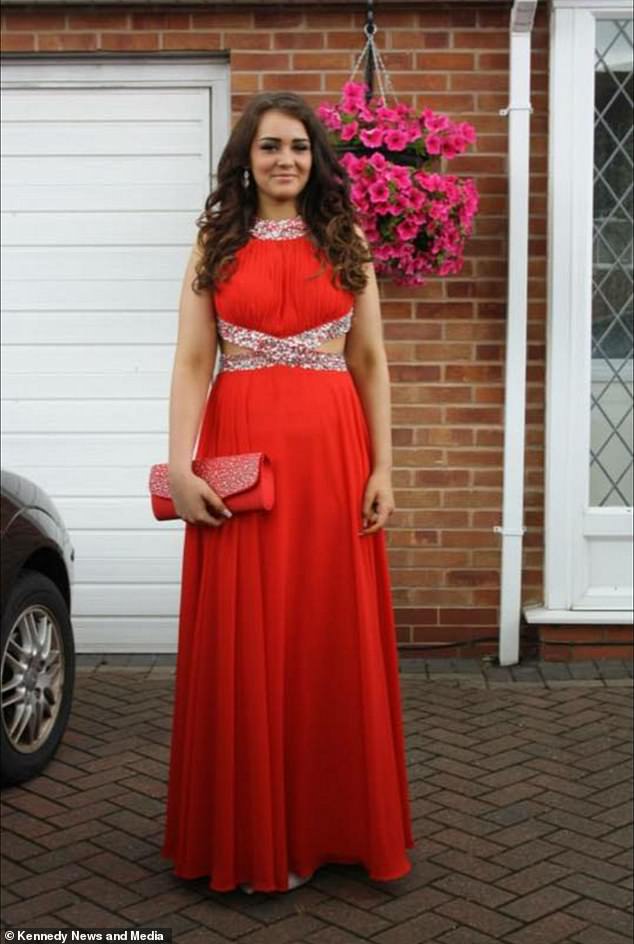 Miss Moane claims you can see her body change ‘week by week’ and is now too embarrassed to leave her house beyond going to work. Pictured, before

‘I’ve literally done every single diet you could possibly think of – all the shakes, everything.’

Miss Moane’s mother, Suzanne Moane, 53, started doing her own research and by chance got in touch with another lipoedema sufferer.

After presenting the information to Miss Moane’s doctors, she was referred to a lipoedema clinic and then a consultant, before being formally diagnosed.

The pain, for which Miss Moane is prescribed painkillers and sleeping tablets, is so bad that she is unable to think about anything else.

She said: ‘It’s painful, every single day. I could cry it’s that painful.

‘It’s like if someone has hit you and you have that throbbing on your skin, it’s like that constantly all over. It’s like my whole body is a big bruise.

‘Even if I bump into something or rub my leg it’s painful because it’s that sensitive.’ 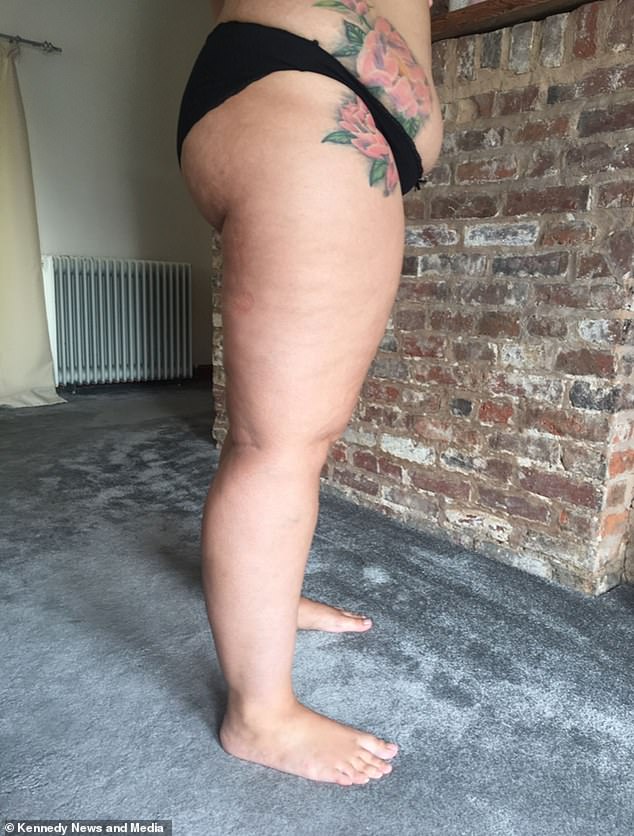 The abnormal fat buildup is distributed across Miss Moane’s arms and below her waist, including buttocks, thighs and legs. Pictured, her legs with the built-up fat 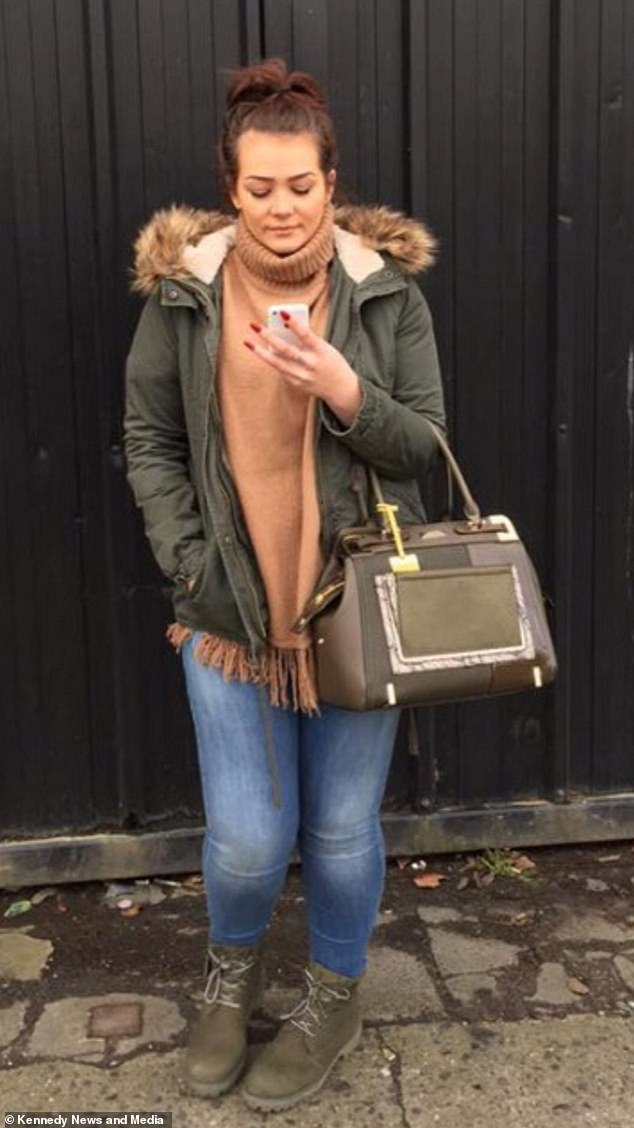 Miss Moane said she feels ‘trapped inside someone else’ and to this day is in constant pain from the rapid fat buildup in her body. Pictured, before 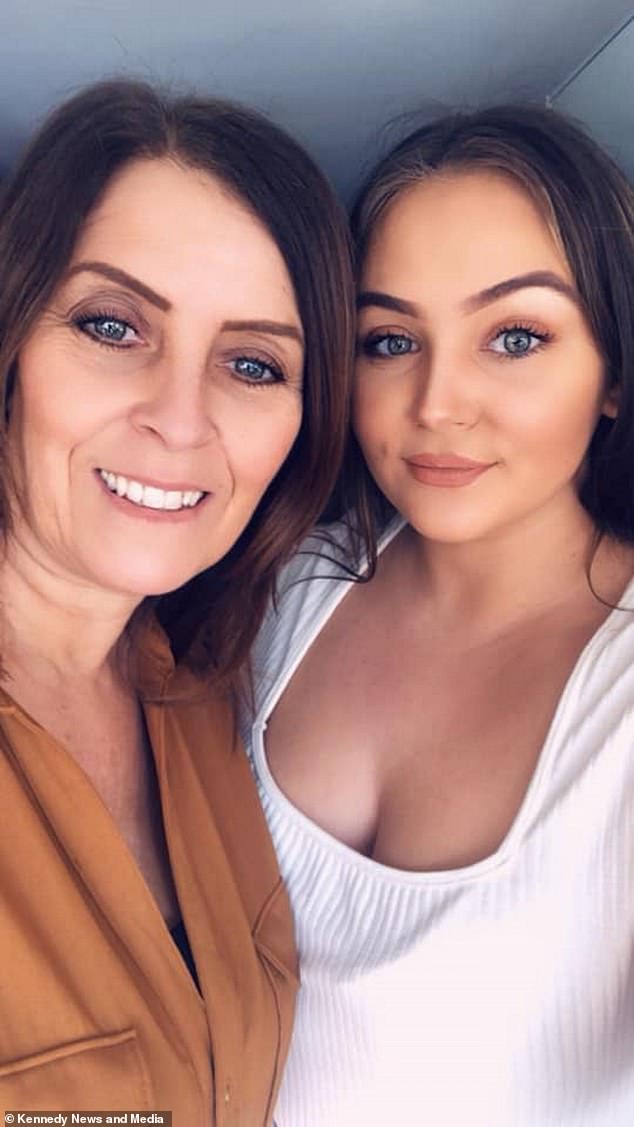 Miss Moane’s mother, Suzanne, 53, said it is heartbreaking seeing her daughter ‘hiding away’ due to her looks. She added that she no longer sees her friends. Pictured together

Miss Moane used to go to the gym every night after work five days a week to swim or do cardio, but now, can barely walk up the stairs.

Mrs Moane said it is heartbreaking seeing her daughter ‘hiding away’ due to her looks.

‘Seeing her go through the stress of it all has affected her daily living. She gets very distressed and her self-esteem is really low,’ she said.

‘She’s hidden herself away for a long time because she doesn’t want anyone to see her.

‘She’s only 20 and she used to go out all the time and have lots of friends around her but she won’t go out to see them now.

‘She’s finding it difficult to walk now because the bigger that her legs get, the more difficult it is for her to lift her legs and walk.’

By the age of 30, Miss Moane believes she will be wheelchair-bound unless she can have surgery.

Mrs Moane said: ‘We were told by the private consultant that she’s one of the youngest ones seen with it at such an advanced stage. 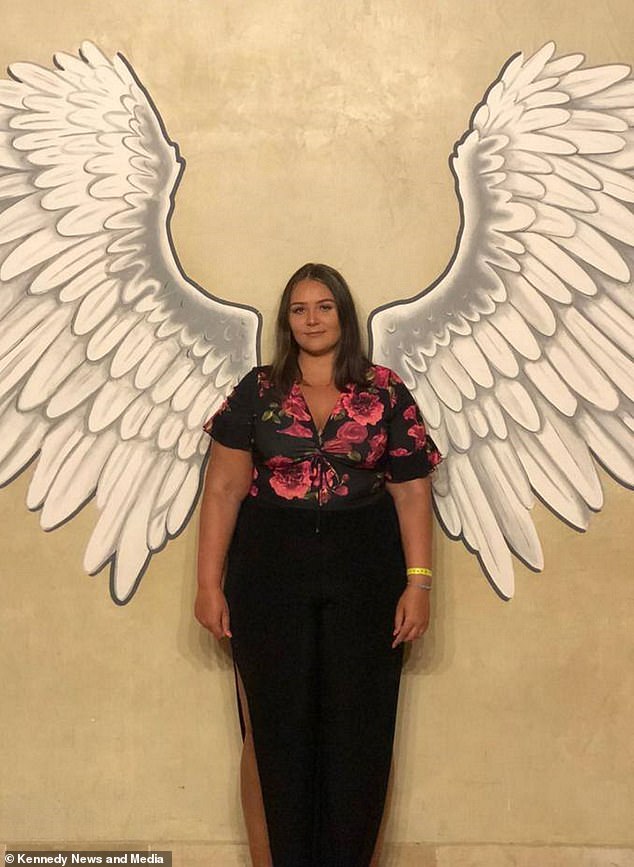 By the age of 30, Miss Moane believes she will be wheelchair-bound unless she can have surgery. She was told by a private consultant that she’s one of the youngest ones seen with it at such an advanced stage. Pictured recently 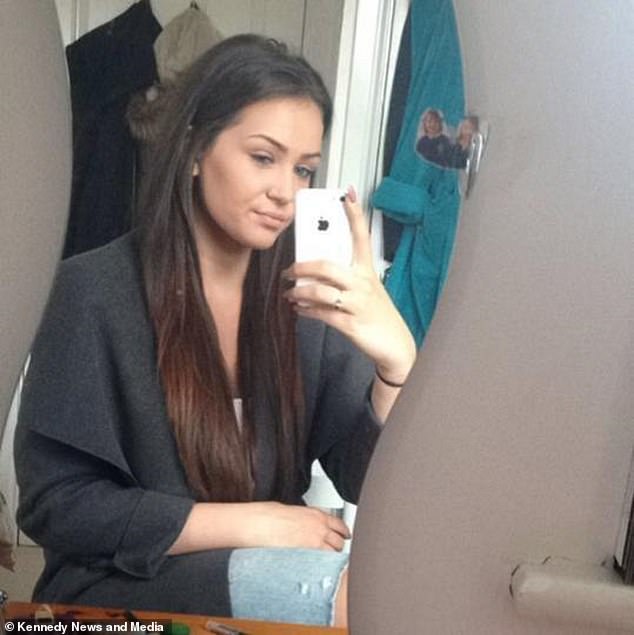 Miss Moane – who used to exercise five times a week – said it is difficult for her to have to explain to people that she is not using ‘excuses’ for being overweight. Pictured in 2015 before 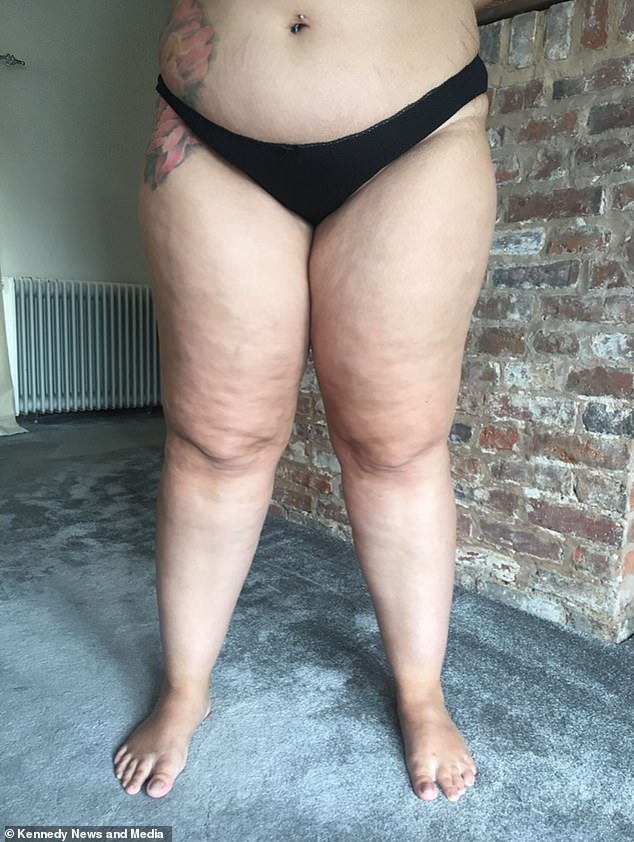 ‘There are hundreds of women with this condition, it’s such a shame. Most women are at the age of 35 or 45 before they reach the stage that my daughter is in at age 20.’

Miss Moane’s GP applied for funding to pay for six complex liposuction operations on the front and back of her legs, arms and lower body, but the request was rejected by her CCG in March.

Miss Moane said: ‘Without raising the money or being able to get it another way it just feels like it’s going to put me in deep debt for the rest of my life.

‘It’s deemed as a cosmetic procedure because it’s a form of liposuction that we need to have. The NHS don’t see a reason to fund it [for me].’

Miss Moane said it is difficult for her to have to explain to people that she is not using ‘excuses’ for being overweight.

She said: ‘It is quite hard to understand what it actually is but I feel like I have to explain myself to people because I don’t want them to just think I’m overweight and not doing anything about it.’

She added: ‘Having these surgeries means everything to me. People ask me if I’m nervous or worried about it, and I’m just not. I just need it to happen.

‘I’m struggling to cope with it at the moment, so for it to be as soon as it can, that’s the only thing I’ve got keeping me going to be honest.’

A spokesperson for Sandwell and West Birmingham CCG said: ‘We understand the difficulties of living with lipoedema but cannot comment on individual cases.

‘All Individual Funding Requests have to be reviewed against the same criteria to ensure patients are treated fairly and equitably.

‘The CCG is currently working with Birmingham and Solihull CCG to develop our clinical treatment policies, including a draft policy on liposuction for lipoedema.’

You can donate to Miss Moane’s fund here. 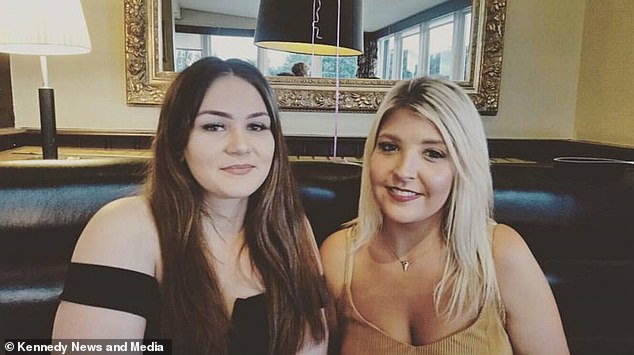 Miss Moane, pictured recently with her sister, Natasha Moane, applied for funding to pay for six complex liposuction operations on the front and back of her legs, arms and lower body, but the request was rejected by her CCG in March. Her family are now desperately trying to raise money

Lipoedema is a long-term chronic condition where there’s an abnormal build-up of fat cells in the legs, thighs and buttocks, and sometimes in the arms.

The condition usually only affects women, although in rare cases it can also affect men.

It is believed to affect nearly 11 per cent of adult women worldwide.

In lipoedema, the thighs, buttocks, lower legs, and sometimes the arms, become enlarged due to a build-up of abnormal fat cells. Both legs and/or the arms are usually enlarged at the same time and to the same extent.

The feet and hands aren’t affected, which creates a ‘bracelet’ effect or ‘band-like’ appearance just above the ankles and wrists.

Leg and arm size can vary between individuals with lipoedema, and the condition can gradually get worse over time.

There’s been little research into lipoedema, so there’s some uncertainty about the best way to treat the condition.

Tumescent liposuction involves sucking out the unwanted fat through a tube.

It’s difficult to get NHS funding for liposuction to treat lipoedema, but your GP can try to apply for funding through your local CCG.

Non-surgical treatments such as compression therapy can sometimes help improve pain and tenderness.

The cause of lipoedema isn’t known, but in some cases there’s a family history of the condition. It seems likely that the gene inherited from parents play a role.

Lipoedema tends to start at puberty or at other times of hormonal change, such during pregnancy or the menopause, which suggests hormones may also have an influence.

Although the accumulation of fat cells is often worse in obese people, lipoedema isn’t caused by obesity.