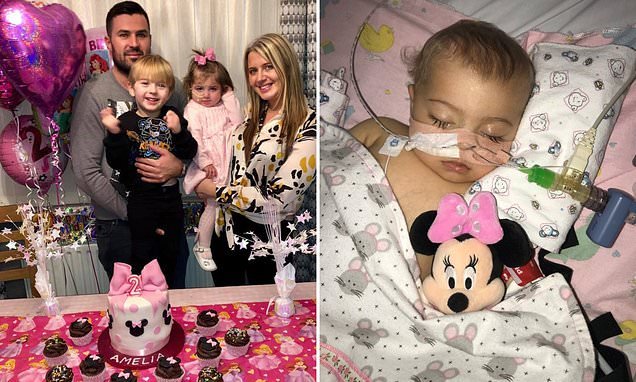 Mother’s instinct saves her daughter’s life TWICE: Baby needed emergency brain surgery after she wasn’t ‘playing with her toys as normal’ and had two strokes after being taken into hospital with a high temperature

A mother has revealed how her instinct helped to save her daughter’s life not just once – but twice.

Janine Clarke, 31, of Liverpool, rushed Amelia Nilsen to hospital when she noticed she was acting ‘different to normal’ – after four doctors dismissed her fears and said there was nothing wrong.

Hours later she underwent emergency brain surgery because doctors found part of her brain was slipping into her spine – a condition called chiari malformation.

Four months later, Amelia was back in hospital because Ms Clarke was concerned about her high temperature of 40.2°C (104.4°F).

She eventually suffered two strokes, thought to be caused by an infected mass on her heart that also triggered sepsis.

The family, who were living in Brisbane, Australia, at the time, were told to expect the worst as Amelia struggled for 15 weeks in hospital.

Fortunately, she pulled through, and the family moved back to the UK in May 2018.

But now, two years old, Amelia is still unable to talk, walk, eat solid food or use her right arm because of the strokes. 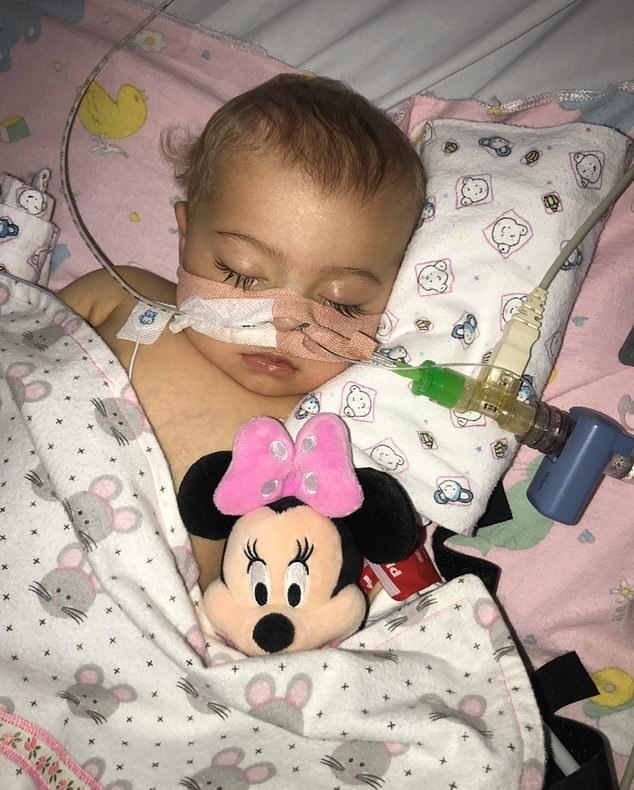 Amelia Nilsen, now two years old, suffered two strokes while in hospital at ten months old (pictured). She was taken into hospital by her mother, Janine Clarke, 31, when her temperature was high, leading to a diagnosis of a gut infection, sepsis, and a rare genetic condition 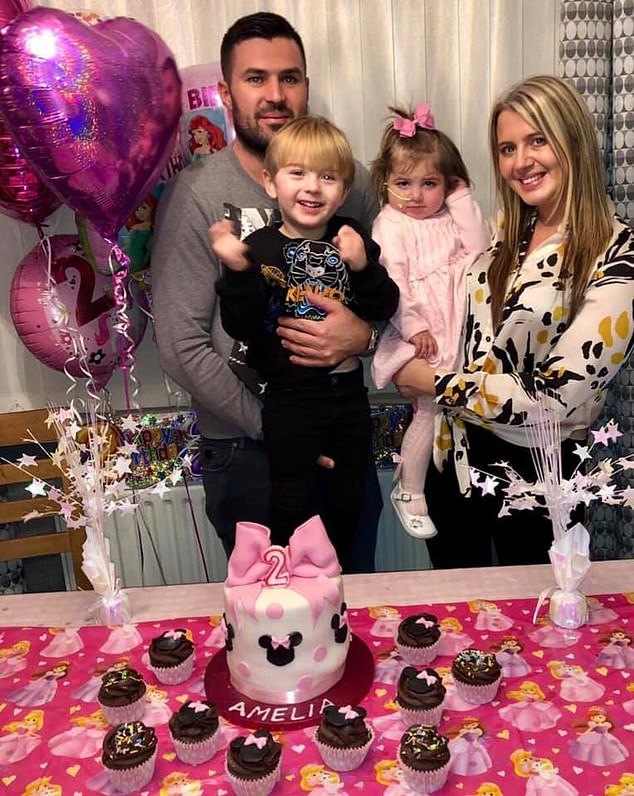 Ms Clarke, pictured with her partner Jay Nilsen, 30, and their other child, Lucas, three, were living in Brisbane, Australia. At six months old, Amelia was given emergency brain surgery hours after her Ms Clarke rushed her into hospital insisting that she was ‘acting different to normal’

‘She couldn’t quite co-ordinate. I observed her for a few hours before taking her to hospital where the doctor said everything seemed fine.’

Ms Clarke insisted she got a second opinion from another doctor at Lady Cilento Children’s Hospital.

Ms Clarke, who has another child, Lucas, three, with her partner, Jay Nilsen, 30, a joiner, said: ‘I felt like I was being a nuisance but I had to make sure that they weren’t missing anything.

‘Even though the doctors kept telling me that she was moving her limbs okay I knew she wasn’t moving them as good or as much as she normally would have done.

‘I wouldn’t leave the hospital until they ran more tests. I stood my ground and demanded they look into things further.’

It was until the fourth doctor that Amelia was given an MRI. They reportedly told Ms Clarke: ‘We will give her an MRI if you’re convinced there is something wrong.’

Ms Clarke and Mr Nilsen were told to go for a walk for a couple of hours while the medical team looked at the scan results.

Within the hour, they were told to come back to hospital immediately, where they were told Amelia needed emergency brain surgery for a chiari malformation.

The exact cause of chiari malformations is unknown. It tends to be present from birth, but is normally only found in adulthood when symptoms develop or when an MRI scan is done. 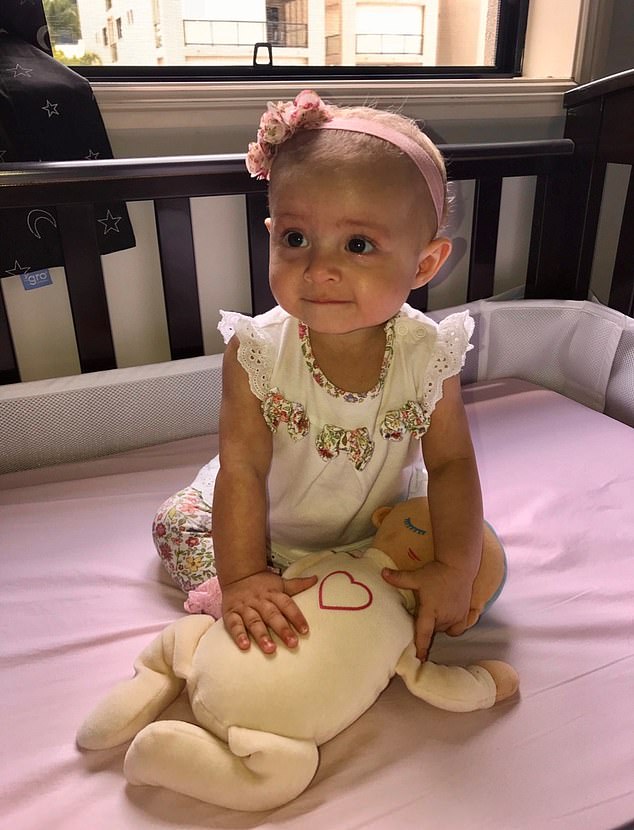 Amelia has been in the midst of genetic testing when her health took a turn for the worst in November 2017. Pictured, before she was taken back to hospital 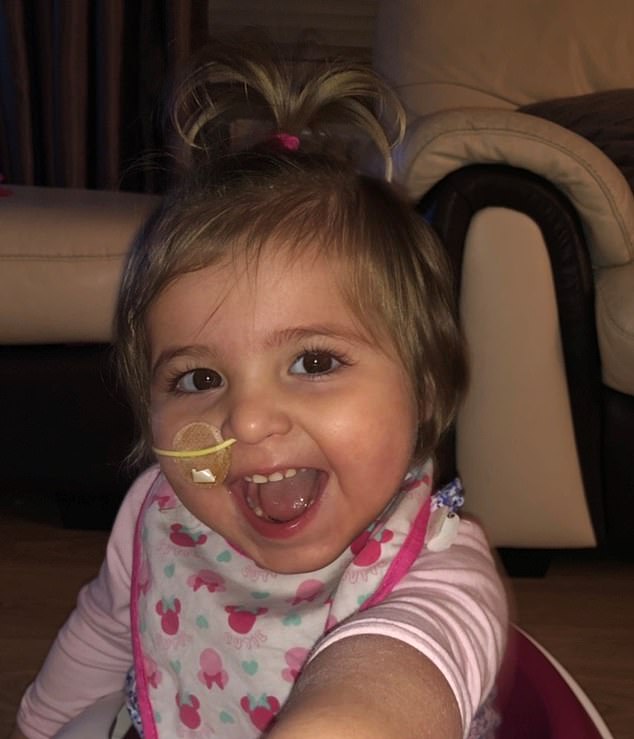 Amelia is is still unable to talk, walk, eat or use her right arm because of the strokes

WHAT IS SHWACHMAN-DIAMOND SYNDROME?

Shwachman-Diamond syndrome is an inherited condition that affects many parts of the body, particularly the bone marrow, pancreas, and skeletal system.

In Shwachman-Diamond syndrome, the bone marrow malfunctions and does not make some or all types of white blood cells.

People with Shwachman-Diamond syndrome have an increased risk of several serious complications related to their malfunctioning bone marrow.

Shwachman-Diamond syndrome also affects the pancreas, which is an organ that plays an essential role in digestion.

Many affected individuals have problems with bone formation and growth, most often affecting the hips and knees. Low bone density is also frequently associated with this condition.

Researchers are not sure how common Shwachman-Diamond syndrome is. Several hundred cases have been reported in scientific studies.

Source: US National Library of Medicine

Ms Clarke said: ‘We were barely able to kiss her goodbye before they wheeled her into theatre.

‘Looking back they [the doctors] probably thought I was being an over cautious mother but something just didn’t seem right and my gut feeling was that something was wrong.’

But the family’s woes were far from over. When Amelia was ten months old, she was in the midst of genetic testing when her health took a turn for the worse.

Ms Clarke said: ‘When Amelia was six weeks doctors realised her immune system was low but they just put it down to an infection and assumed she would get better on its own.

‘But Amelia wasn’t putting on much weight and had frequent loose stools.

‘I kept mentioning it and a doctor said he would put forward her for genetic testing in October 2017.’

The results were yet to come through when one morning, in November 2017, Amelia suddenly came down with an extremely high temperature.

Fearing the worst, her parents rushed her to hospital where it was found that Amelia had an infection in her gut.

Ms Clarke said: ‘They were pumping her with antibiotics, giving her transfusions and injections to boost her immune system. She was so poorly.’

After a few days in hospital Amelia’s condition deteriorated dramatically and she was taken to intensive care.

Once there, the genetic test results came back and revealed Amelia had Shwachman–Diamond syndrome.

Shwachman-Diamond syndrome is an inherited condition that affects many parts of the body, particularly the bone marrow and pancreas, characterised by a weak immune system.

Despite the best efforts of doctors, Amelia was unable to fight the gut infection quickly, and was hit with sepsis ten days later.

‘That’s when they became really concerned,’ Ms Clarke said. ‘Her organs sort of began to shut down. But the doctors were worried she wasn’t strong enough to be operated on.’ 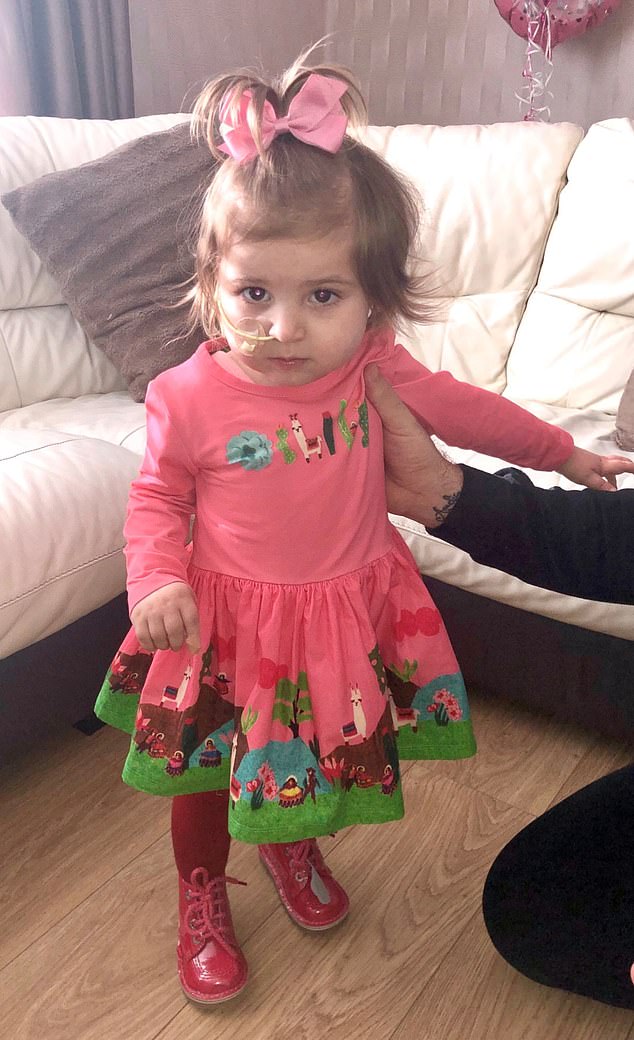 Genetic test results came back and revealed Amelia had Shwachman–Diamond syndrome, which affects the bone marrow and number of blood cells 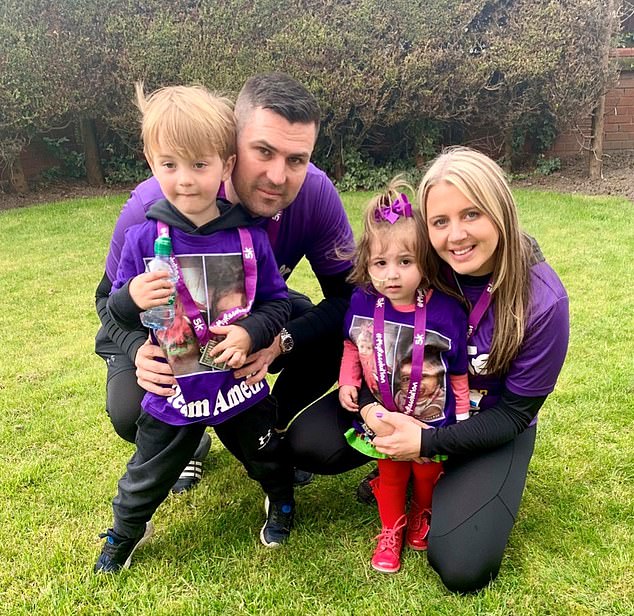 Amelia’s family were told to expect the worst while their daughter was in hospital for 15 weeks – but she pulled through and in May 2018, they moved back to the UK

‘She developed a vegetation (an infected mass) on her heart, and then pieces of the vegetation broke off and caused blood clots in her arms and legs.’

‘She developed a vegetation (an infected mass) on her heart, and then pieces of the vegetation broke off and caused blood clots in her arms and legs.’

The cause of the vegetation were never determined, according to Ms Clarke.

The blood clots caused a block of blood flow and oxygen to the brain, and Amelia suffered two strokes.

Ms Clarke said: ‘They suspected she had them a few days after developing the sepsis. It was confirmed after she had CT scans. We were devastated.

‘We literally never left her bedside and watched in awe of the doctors and nurses who worked around the clock to help save our baby girl.

‘The doctors said when they took her off the ventilator they didn’t know if she would survive or breathe by herself, and if she did, what quality of life she would have.

‘We had a family meeting and were just told to prepare ourselves for the worst.

‘How does she go from a happy baby to this? It all happened within a few weeks, we couldn’t process it.’

After spending five weeks in ICU, Amelia went from strength to strength and was moved onto the baby ward in the hospital and then after, some time the rehabilitation ward.

After spending a total of 15 weeks and three days in hospital, Ms Clarke and Mr Nilsen were finally able to take Amelia home.

Ms Clarke said: ‘The strokes have caused her the most damage. She still can’t use her right arm and she’s not talking even though she’s just turned two.

‘She eats mashed up food because of the strokes but she still can’t drink properly and is fed her fluids through a tube.’

Due to the Shwachman–Diamond syndrome, Amelia can catch infections easier, and therefore her parents must be careful about her coming into contact with ill people or children.

‘Once every 12 days Amelia has blood tests and an injection to boost her white blood cells,’ Ms Clarke said.

‘She is the strongest, happiest, most determined little girl that we know. She has a long road ahead of her but we will all be there to help her every step of the way and watch her grow and achieve whatever she sets her mind too.’

The family took part in a 5k Stroke Resolution Run at Croxteth Park on March 31 to raise awareness of strokes in young children. You can donate to their fundraising by clicking here. 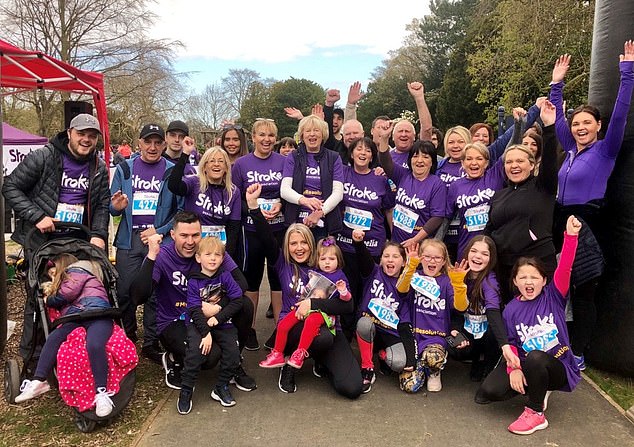 WHAT IS CHIARI MALFORMATION?

Chiari malformation occurs when the brain tissue extends into the spinal canal. This can happen if the skull is abnormally small or misshapen, which presses the brain downwards.

The Brain & Spine Foundation in the UK and the National Institute of Neurological Disorders and Stroke in the US both estimate one in every 1,000 people are born with the condition.

It may actually be more common due to not all sufferers developing symptoms.

There are three types of chiari malformation:

Type I – occurs as the skull and brain are growing. Symptoms usually appear in late childhood or early adulthood and include neck pain, poor balance, co-ordination difficulties, numbness, dizziness and impaired vision

Type II – is present at birth and related to spina bifida. Occurs when more of the brain tissue extends into the spinal cord than in Type I. Symptoms may include changes in breathing patterns, swallowing problems, arm weakness and quick downward eye movements

Type III – is present at birth and the rarest form of chiari malformation. Occurs when a portion of the lower part of the brain extends through an abnormal opening in the back of the skull. Has a high mortality rate and can cause brain damage

Although not usually considered life-threatening, chiari malformation may be fatal if a patient’s breathing or swallowing is affected.

It can also lead to hydrocephalus – the build-up of cerebral spinal fluid in the brain – which can be deadly if untreated.

Treatment may not be necessary if symptoms are mild with just regular check-ups and MRI scans being required.

However, surgery can be carried out to remove a small section of bone at the back of the skull. This relieves pressure by giving the brain more room.

The procedure runs the risk of infections, fluid in the brain and spinal cord leaking. Although the operation helps to relieve symptoms it cannot cure nerve damage that has already occurred.