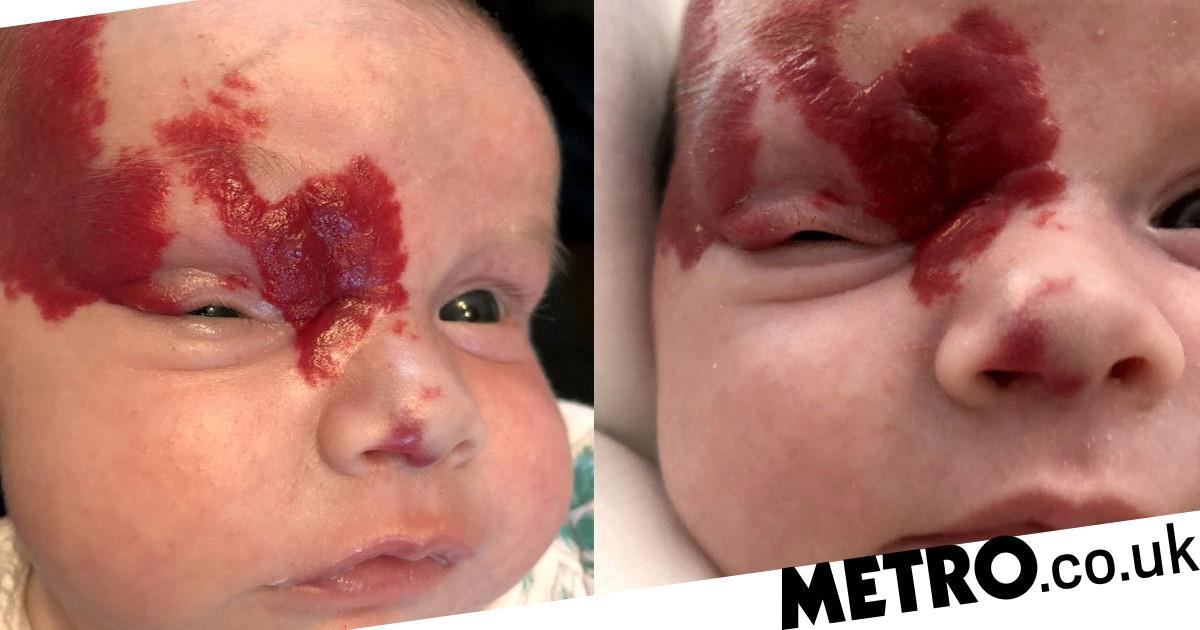 A baby girl’s birthmark was actually a tumour that could have made her go blind – and her mum only found out thanks to a stranger on Facebook.

Amanda Dobbins, 31, first noticed a little mark on her baby Sophia’s face when she was less than a week old.

Doctors assured her it was just a birthmark, but within days the mark had grown to cover half of Sophia’s face, leaving her with large red patches around her eye.

Desperate to figure out what was wrong, Amanda posted photos in a Facebook group for new mums. There, replies flooded in to tell the mum to get Sophia checked for a haemangioma, a tumour formed of blood vessels under the skin.

Amanda and husband Neil went to Great Ormond Street Hospital, where she was diagnosed with a haemangioma that, had it been left untreated, could have made Sophia blind.

Amanda, a pharmacy technician, said: ‘When she was three or four days old we could see a tiny little mark at the tip of her nose, it was like a little scratch.

‘First the doctors said it was a stork bite because it was really light pink- before we left the hospital it got a bit darker so they said it’s a port wine stain and that’s where they left it.

‘When she was about two weeks old, we were really worried and didn’t know where to turn because it was just getting bigger and redder but I trusted the doctors.

‘We were constantly researching, trying to find out information on port wine stain initially, what to do to keep it healthy and when it came out it was a haemangioma we had questions like “is she always going to have it”?, “is it going to get bigger?”- it was just a lot to take in.

‘I was relieved when I posted the picture on Facebook and someone gave me some advice.

‘A lady messaged me saying “I don’t think it’s a port wine stain, I think it’s something called haemangioma”.

‘It all depends on the location but in Sophia’s case it was very close to her eye and could have affected her sight.

‘It went from very pale pink to looking like someone poured a pot of blood over her head, it was really swollen, it would bleed.’

Sophia was given medication through the hospital to treat the tumour, which has now almost disappeared.

A year later Sophia’s medication will be reduced to check if the mark regrows.

She’s incredibly lucky that her mum searched for answers and got the tumour treated in time.

‘It took three days going to the hospital because her haemangioma kept bleeding and we couldn’t stop it,’ explained Amanda.

‘Eventually they told us they’d start her on propranolol, but we’d have to stay in the hospital to be monitored.

‘The medication affects her sleep, you have to be really careful with the dosage because it can affect the blood sugar and the blood pressure so you have to monitor it constantly.

‘We didn’t really know what to do, she is our first child, we wanted to do the best for her, we didn’t know who to reach out to.

‘We can’t really remember her with the full on birthmark- it’s very odd.

‘We’ve been very lucky with people in general, we’ve only had maybe a few people staring and asking, “oh what she done, how did she fall over” and we had to explain to them it’s not an accident it’s a birthmark.

‘We are just grateful she is not old enough to understand that people are talking about her.

‘When she gets older we want to teach her to appreciate it and learn it’s a part of who she is.

‘And to know how much she’s been through at such a young age without realising it – she just doesn’t know how strong she is.

‘It would have done some major damage – because of how quickly it developed and how quickly it grew if we hadn’t have gotten her on a treatment, when we did, she would possibly have damaged the sight in her right eye completely.