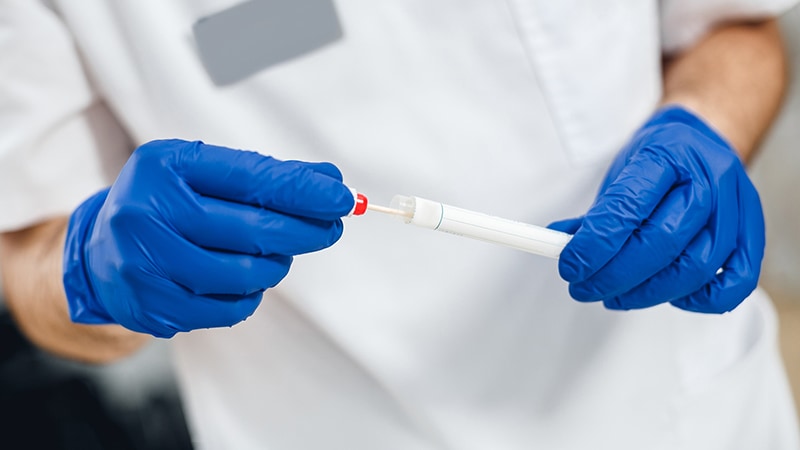 MicroRNAs (miRNAs) that signal hepatocellular carcinoma (HCC), the most common type of liver cancer, have been detected in saliva for the first time, according to results from a pilot study.

The findings were published online in PeerJ.

The discovery has the potential to offer a noninvasive alternative or complement to available detection tools ― ultrasound and the blood biomarker alpha fetoprotein (AFP) ― which lack sensitivity, said Daniel Rotroff, PhD, MSPH, senior author of the study and a researcher in the Department of Quantitative Health Sciences at the Cleveland Clinic in Ohio.

“Right now, the current clinical tools are not adequate,” he told Medscape Medical News. “They miss approximately 40% to 50% of the patients who have HCC.”

Scientists are interested in finding better ways to detect liver cancer, the rates of which are growing rapidly. HCC represents 80% of all liver cancers.

“HCC and liver cancer are the fastest growing cancers in the United States,” Rotroff said. “They are the fifth- and seventh-leading cause of cancer death in men and women, respectively.”

Nancy Reau, MD,the Richard B. Capps Chair of Hepatology and section chief, Hepatology, at Rush Medical College in Chicago, Illinois, who was not part of the study, told Medscape Medical News that despite the study’s being relatively small in scale, the preliminary information it provides is nonetheless “really attractive.”

If larger studies confirm the results, the discovery could open up the possibility of patients mailing in saliva samples from their homes to screen for liver cancer.

The pandemic, she noted, highlighted the shortcomings of ultrasound in screening for liver cancer, as it required patients to come into a facility.

“You’d love to have a biomarker that was more accessible and accurate,” she said. “It would have lots of applicability where cancer surveillance is less available.”

Rotroff added, “We do know saliva samples can be stable at room temperature. It opens up possibilities to expand the net of being able to screen a wider number of patients.”

Liver cirrhosis is the primary risk factor for developing HCC, so distinguishing patients with HCC from this cohort of high-risk patients serves as a proof of principle.

The sequencing showed that 4565 precursor and mature miRNAs were detected in saliva and that 365 were significantly different between those with HCC compared to cirrhosis (false discovery rate, P < .05).

“Interestingly, 283 of these miRNAs were significantly downregulated in patients with HCC,” the authors write.

Machine learning found a combination of 10 miRNAs and covariates that accurately classified patients with HCC (area under the curve = 0.87).

The researchers note that miRNAs have been found in saliva and have shown potential as noninvasive biomarkers for a number of other cancers, including breast, oral, and lung cancers.

Additionally, Rotroff said, microRNAs have been shown to be altered in the tumor tissue of HCC compared with the surrounding tissue.

Reau noted that a strength of the study is that it validated the biomarker in a diverse group of patients already diagnosed with liver cancer, including people with early-stage cancer, those who underwent transplantation, and those with recurrent cancer.

“Everyone searching for biomarkers is looking to make sure that the surveillance tool identifies the patient when it can pay off with early treatment,” Reau said.

“You don’t want to identify cancer when it’s bad and you don’t have any options.

This is a little bit where AFP sometimes fails. Even if ultrasound isn’t that accurate, it still generally identifies people when they fit within curative guidelines.”

Rotroff has an equity stake in Clarified Precision Medicine LLC. He holds intellectual property related to the detection of HCC. Reau reports no relevant financial relationships.