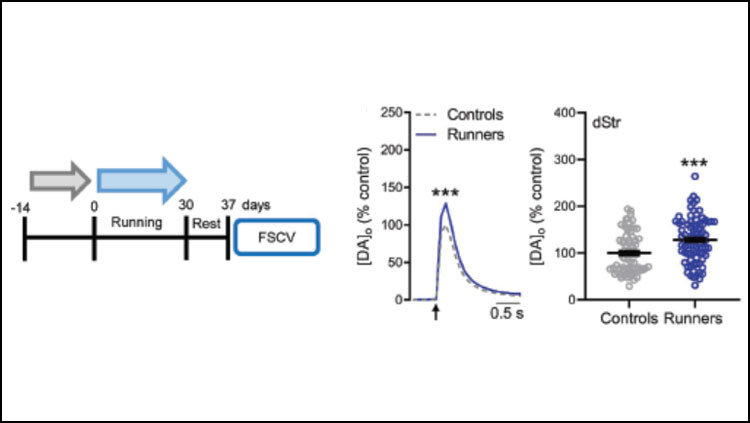 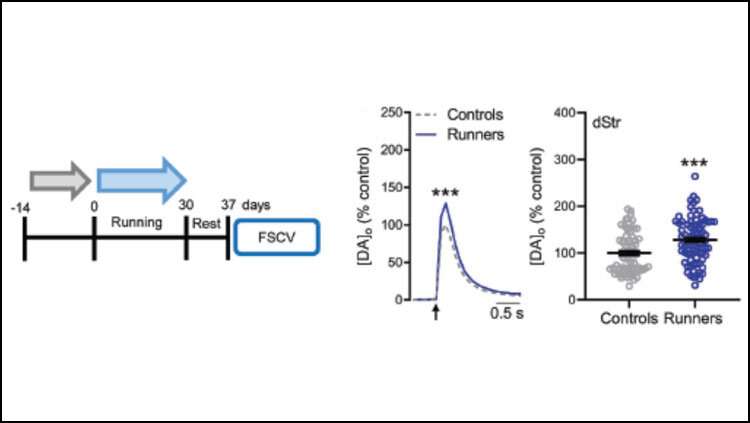 Exercise increases levels of a chemical involved in brain cell growth, which bolsters the release of the “feel good” hormone dopamine, a new study shows. Dopamine is known to play a key role in movement, motivation, and learning.

Experts have long understood that regular running raises dopamine activity in the brain and may protect nerve cells from damage. In addition, past research has tied exercise-driven boosts in the dopamine-triggering chemical called brain-derived neurotrophic factor (BDNF) and in dopamine levels to improvements in learning and memory. However, the precise way these three factors interact has until now remained unclear.

Led by researchers at NYU Grossman School of Medicine, the investigation showed that mice running on a wheel for 30 days had a 40% increase in dopamine release in the dorsal stratium, the part of the brain involved in movement, compared to levels in mice that did not exercise. The runners also showed a nearly 60% increase in BDNF levels compared to their non-running counterparts. Notably, the increase in dopamine release remained elevated even after a week of rest. Additionally, when BDNF levels were artificially reduced, running did not lead to additional dopamine release.

“Our findings suggest that BDNF plays a key role in the long-lasting changes that occur in the brain as a result of running,” says study lead author and neurobiologist Guendalina Bastioli, Ph.D. “Not only do these results help explain why exercise makes you move, think, and feel better, they also show that these benefits continue even if you do not work out every day,” adds Bastioli, a postdoctoral fellow in the Department of Neuroscience at NYU Langone Health.

While researchers have previously measured dopamine activity during running, the new investigation provides insight into the longer-term behavior of the hormone and its effects on the brain well after exercise stops, according to Bastioli. The report is publishing online May 16 in the Journal of Neuroscience.

For the investigation, researchers provided dozens of male mice with unlimited access to either a freely rotating wheel or a locked wheel that could not move. After one month, the team measured dopamine release and BDNF levels in brain slices. They repeated this same process on a new group of rodents, some of which had been genetically modified to produce half as much BDNF as regular mice.

The study authors note that patients with Parkinson’s disease and other movement disorders are often treated with drugs that mimic dopamine’s effects on motor neurons. However, the mechanism behind dopamine’s role in this protective benefit of exercise had not been thoroughly explored.

“Our results help us understand why exercise alleviates the symptoms of Parkinson’s disease, as well as those of neuropsychiatric disorders such as depression,” says study senior author and neuroscientist Margaret Rice, Ph.D. “Now that we know why physical activity helps, we can explore it as a means of augmenting or even replacing the use of dopamine-enhancing drugs in these patients.”

Rice, a professor in the Departments of Neurosurgery and Neuroscience and Physiology at NYU Langone, cautions that while the preliminary findings in rodents were promising, future studies in humans will be required to fully understand the role of BDNF and dopamine in Parkinson’s disease.

She adds that the study team next plans to investigate the relationship between exercise and these chemicals in female mice, which notably run more frequently than males. In addition, the researchers intend to directly examine whether active mice indeed have improved motor skills compared with those with limited physical activity.