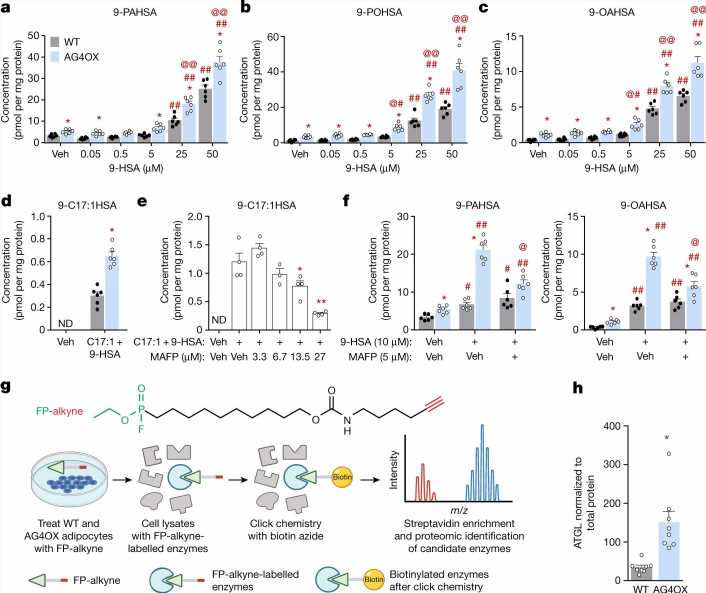 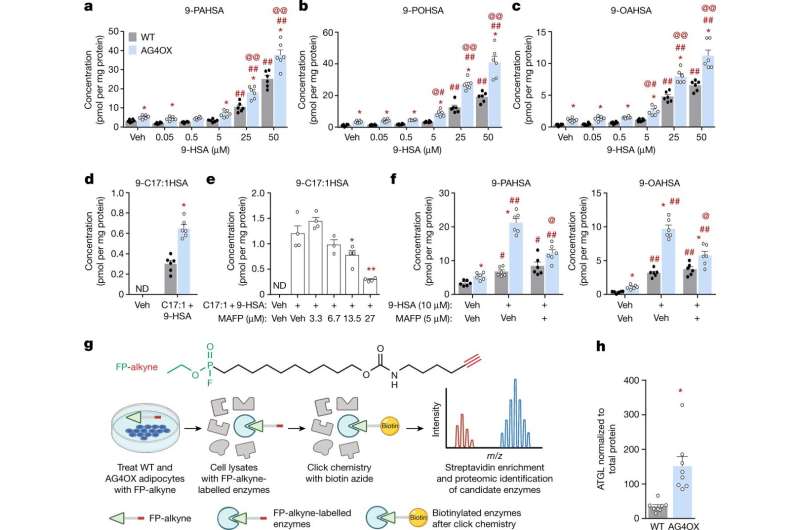 About 422 million people worldwide have diabetes, and 1.5 million deaths are directly attributed to diabetes each year, according to the World Health Organization. Type 1 diabetes is a chronic condition in which the insulin-producing cells in the pancreas have been damaged and no longer produce insulin; Type 2 diabetes occurs when the body becomes resistant, or insensitive, to insulin. Both versions of the disease result in elevated levels of blood glucose—or blood sugar—which can lead over time to serious damage to the heart, blood vessels, eyes, kidneys and nerves if uncontrolled by treatment. Life-saving drugs and devices have been developed for patients with diabetes, yet many people still struggle with poor blood glucose control, leaving them at high risk for complications.

Now, endocrinologists at Beth Israel Deaconess Medical Center (BIDMC) have identified a key enzyme in the synthesis of a new class of lipids (or fats), called FAHFAs, that are made in human tissues and have beneficial effects on insulin sensitivity, blood sugar control and other metabolic-related parameters in humans and mice. The discovery, published in Nature, opens the door to potential new treatments for types 1 and 2 diabetes.

“The long-term goal is to safely replace insulin-producing pancreatic beta cells in people with type 1 diabetes, but this would require a way to protect those cells from attack by the immune system,” said Barbara B. Kahn, MD, who is vice chair for research strategy in the Department of Medicine at BIDMC. “We have shown that these FAHFA lipids protect beta cells from immune attack and metabolic stress. If we could increase FAHFA levels, we think this could be beneficial for both type 1 and type 2 diabetes. Our new discovery is a breakthrough because, for the first time, we know how these lipids are made in mammalian tissues.”

In 2014, Kahn’s lab in collaboration with Alan Saghatelian, now a professor at the Salk Institute, discovered the previously unknown class of lipids known FAHFAs (which stands for fatty acid esters of hydroxy fatty acids). In humans, FAHFA levels are linked with sensitivity to insulin. FAHFAs improve blood sugar control in diabetic mice and they reduce proinflammatory immune responses which results in a lower incidence of type 1 diabetes in mice. These lipids also protect the cells in humans that make insulin—known as pancreatic islet beta cells—from attack by immune cells and from cellular stress. Conversely, levels of these lipids are low in the serum and fat tissue of people who are at risk for, or who have, type 2 diabetes.

In the current study, Kahn’s lab in collaboration with Saghatelian determined that an enzyme called adipose triglyceride lipase, or ATGL, plays a key role synthesizing the FAHFA lipids. The experiments, carried out in mice and in human and mouse cells—led by first author Rucha Patel, a BIDMC postdoctoral fellow, and second author, Anna Santoro, an instructor at BIDMC—showed that ATGL is the major biosynthetic enzyme for FAHFAs in fat tissues. Further work will investigate whether ATGL is also the major biosynthetic enzymes in other tissues and whether additional enzymes help synthesize the beneficial lipids.

The discovery could ultimately pave the road to new therapeutic strategies for people with diabetes.