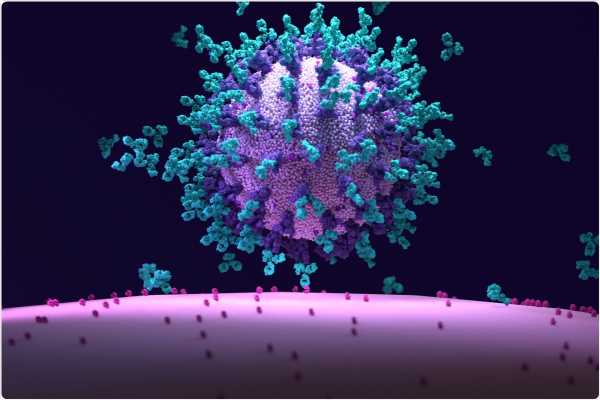 To date, the ongoing novel coronavirus disease 2019 (COVID-19) – caused by the severe acute respiratory syndrome coronavirus 2 (SARS-CoV-2) – has led to over 192.17 million confirmed cases and over 4.13 million deaths. However, it is only the seventh pathogenic human coronavirus to be identified.

A new study, recently released as a preprint on the medRxiv* server, reports the intriguing finding that the cross-neutralizing antibodies elicited by human seasonal coronaviruses (sCoVs) show varying ability to prevent binding between the SARS-CoV-2 spike antigen and its cognate receptor, the angiotensin-converting enzyme 2 (ACE2). 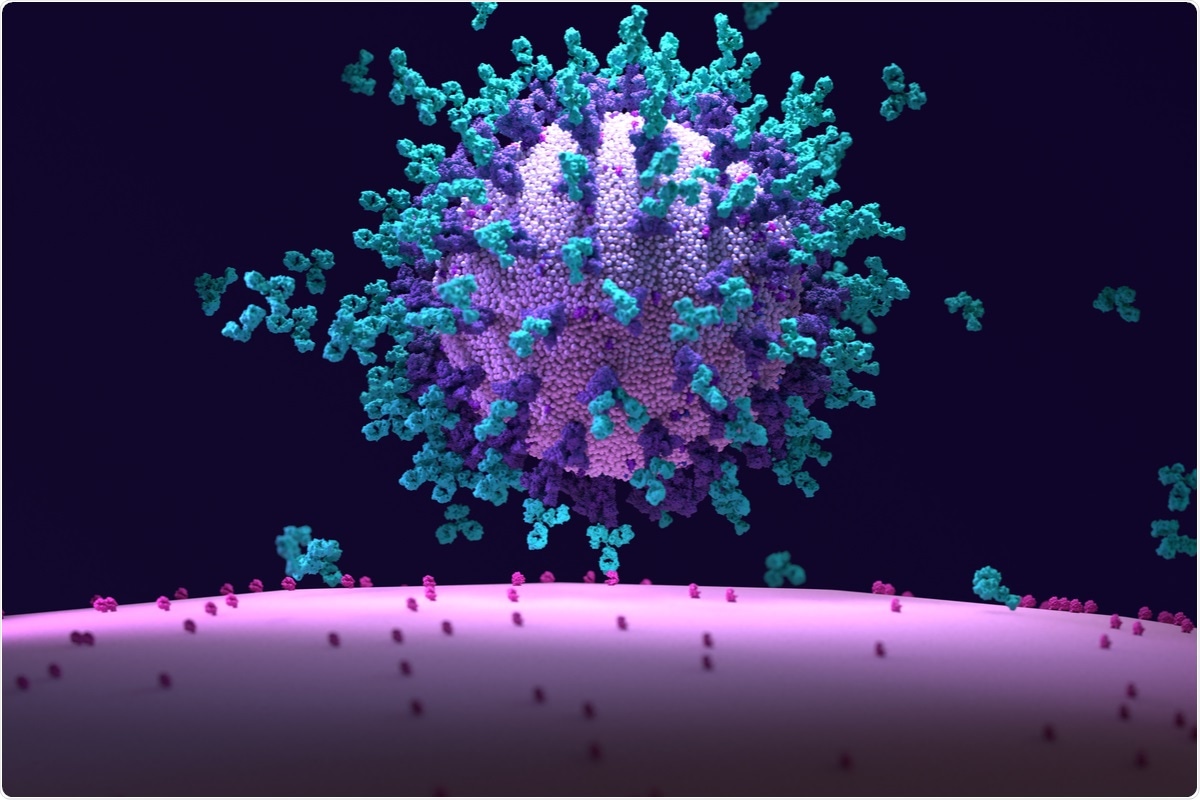 Four endemic seasonal coronaviruses have been circulating in the world for years past, causing recurrent minor infections such as the common cold. Seroprevalence studies have shown that the most frequently found is the OC43, followed by NL63, HKU1, and finally 229E. Almost every adult has been infected at least once by one of these viruses.

As a result, antibodies to these viruses are present universally, but their titer wanes over time. The duration of protection appears, from an earlier study, to be about 12 months, even though reinfections are known to occur after 6 and 9 months after the initial infection.

This indicates not only that immunity is short-lived, but that antibodies to any or all of the four sCoVs may be present, producing highly variable ratios of antibodies. Obviously, the most recent infection will be associated with the highest titers.

The genomic sequence of the sCoVs shows low similarity or identity to the SARS-CoV-2 genome. The spike protein of the latter virus shares the common ACE2 receptor only with NL63. However, the spike domains of the sCoVs react with both antibodies and T cells elicited by the betacoronaviruses ARS-CoV-1, SARS-CoV-2 and MERS- (Middle East respiratory syndrome) CoV.

Even more significantly, the nucleoprotein (N) antigen is highly conserved across the human coronaviruses and accounts for the loss of specificity in serologic studies using full-length SARS-CoV-2 spike and N antigens.

Neutralizing antibodies have been described to target mostly the SARS-CoV-2 spike, both the receptor-binding domain (RBD) and non-RBD binding epitopes. Non-neutralizing antibodies have also been known to have effector functions that inhibit SARS-CoV-2 infection, and these also bind to spike and N antigens expressed on the surface of infected cells.

The current study aimed to examine the effect of pre-existing immunity on COVID-19 severity since earlier studies have shown conflicting results ranging from protective effects to the absence of cross-protective antibodies.

The scientists found that the four sCoVs seem to cause reinfections annually. About a third of individuals younger than 21 years had antibodies to these pathogens compared to 61% for the whole cohort.  For OC43, 229E and NL63, seroprevalence overall was 83%, 82% and 75%, respectively, mostly as expected from earlier surveys.

Cross-reactivity between antibodies elicited by different sCoVs was observed in up to three out of four samples, indicating that seroprevalence assays are non-specific if based only on the spike antigen. Ideally, multiple antigen targets should be included to make sure that true positives are being detected.

In pre-COVID-19 samples, immunoglobulin G (IgG) antibodies were found to react against both SARS-CoV-2 RBD and S antigens in approximately 5% of cases. However, the N antigen elicited up to 15% cross-reactivity.

This is an important finding since the N antigen is frequently used in seroprevalence assays. Moreover, it is highly conserved, as already mentioned. This could lead to high anti-sCoV N antibody levels following SARS-CoV-2 infection if the individual were recently infected with one of the sCoVs.

Anti-N antibodies do not protect against SARS-CoV-2 infection at any titer since they are non-neutralizing antibodies.

Among the IgG isotypes, most antibodies in pre-pandemic sera displayed little cross-reactivity to SARS-CoV-2 antigens. However, anti-SARS-CoV-2 spike IgG3 antibodies increased in proportion to disease severity.

Cross-reactivity can be distinguished by using multiple antigens and considering multiple antibody isotypes, since most false positives show reactivity to only one isotype and one antigen, or one of each. The false discovery rate (FDR) for two or three antigens was found to be < 2% and 0.5%, respectively, vs. 5-11% with single antigens.

This highlights the importance and value of considering simultaneously more than one antigen for SARS-CoV-2 serological testing,” say the study’s authors.

The scientists also found that anti-sCoV antibodies inhibited SARS-CoV-2 S-ACE2 binding over a wide range, from not at all to 45%, though one patient showed almost 90% inhibition. This is in contrast to others who showed negligible neutralizing activity of spike-pseudoviruses.

The researchers also comment that autoantibodies to the ACE2 receptor, detected in epilepsy, may participate in neutralization, since they block spike binding. This requires further confirmation, however.

Classifying the sample by neutralizing activity (using inhibition of spike-ACE2 binding as a proxy), they found that about 70% were partial responders; that is, their neutralization activity was lower than that observed in COVID-19 patients who had just been tested positive. About 30% were responders, showing similar activity to new COVID-19 patients. Only 3% of them were non-responders, that is, without any neutralizing activity against SARS-CoV-2 spike-ACE2 binding.

Interestingly, antibody levels against the four sCoVs were comparable in all three groups, and most targeted the N antigen. Thus, merely having high antibody titers did not ensure neutralizing activity against SARS-CoV-2.

While N antibodies are unlikely to be neutralizing, their Fc effector function, their role in CD8+ T cell responses and/or the cytokines and immune factors involved in their production may all have an indirect influence on other antiviral pathways in a live infected host.”

This implies that NL63 and OC43 titers are linked to higher cross-reactive inhibitory antibodies to SARS-CoV-2. This corresponds to earlier reports, but is here specifically linked to abundant OC43 antibodies. Meanwhile, neutralization is negatively correlated with 229E and HKU-1 anti-S antibody titer.

This means that exposure to 229E and HKU-1 shortly before SARS-CoV-2 infection will not, probably, contribute to the neutralization of the latter.

After further analysis, the scientists found that sCoV antibody levels could be used as predictors in a suitable model (called a GPR model, for Gaussian process regression) to correctly predict the inhibitory capacity of ACE2 in all the three groups described above, whether non-responders, partial responders or responders.

What are the implications?

These data link the capacity of pre-pandemic sera to neutralize SARS CoV-2 S / ACE2 binding to both specific patterns of elevated antibody levels against NL63 S and OC43 S as well as additional unknown factors, yet to be identified, conferred by this specific pattern of cross-reactive antibodies to SARS-CoV-2 S,” the scientists commented.

In other words, the absolute titer of pre-existing sCoV antibodies is less predictive than their relative titers, since only specific patterns are associated with neutralizing efficacy. The incorporation of latent variables allowed the researchers to construct a model that accurately predicts inhibition of spike-ACE2 binding.

Notwithstanding this new indication that sCoV exposure is protective against SARS-CoV-2 severity, and in particular NL63 exposure, the role of T cells in this protective effect remains to be understood. This may be the latent factor remaining unknown in this model.

In future work, it will be critical to evaluate if our GPR analysis holds true in predicting COVID-19 severity by way of sCoV antibody ratios,” conclude the authors.

Dr. Liji Thomas is an OB-GYN, who graduated from the Government Medical College, University of Calicut, Kerala, in 2001. Liji practiced as a full-time consultant in obstetrics/gynecology in a private hospital for a few years following her graduation. She has counseled hundreds of patients facing issues from pregnancy-related problems and infertility, and has been in charge of over 2,000 deliveries, striving always to achieve a normal delivery rather than operative.