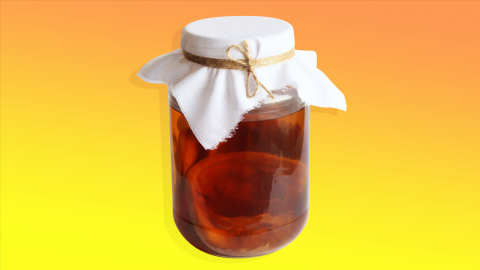 Kombucha — a fermented tea — is a very specific (some would say acquired) taste that you either love or hate. There are claims that it comes with a whole bunch of health benefits — more on those later — but because of its alcohol content, might not be great for certain groups, like kids. But what about pregnant people? SheKnows spoke with several doctors to get their take on whether it’s safe to drink this trendy beverage while pregnant.

In case you’re not familiar with the drink, kombucha is a fizzy and slightly sour beverage made from green or black tea, sugar, and a thick cloudy mass called a “scoby” — a special mix of bacteria and yeast, Dr. William Li, author of Eat To Beat Disease: The New Science of How Your Body Can Heal Itself explains. “The combo of these ingredients leads to fermentation and the generation of acetic acid, alcohol and gas,” he tells SheKnows.

According to Dr. Tarek Hassanein of the Southern California GI & Liver Centers, kombucha comes with a lot of supposed health claims — everything from decreasing blood pressure and cholesterol, to improving your immune system, as well as your gastrointestinal and liver functions. However, there are no data from human research studies to support such claims, he tells SheKnows.

Is kombucha safe during pregnancy?

In short, the safest thing is to avoid drinking kombucha while pregnant. Three out of the four doctors interviewed for this article said that pregnant people should not drink kombucha at all. The fourth, Dr. Kristine Gedroic, director of The Gedroic Medical Institute in Morristown, NJ, and author of A Nation of Unwell, says that while it can be safely consumed during pregnancy, she only recommends commercial-grade kombucha to her pregnant patients. “While home brewing kombucha is popular today, the kinds and levels of bacteria can not be monitored due to lack of pasteurization and this is therefore not safe during pregnancy,” she tells SheKnows.

Similarly, Dr. Felice Gersh, an OB/GYN, founder/director of the Integrative Medical Group of Irvine, in Irvine, CA and author of PCOS SOS: A Gynecologist’s Lifeline To Naturally Restore Your Rhythms, Hormones and Happiness, points to a 2014 study that found that people who are breastfeeding or pregnant should not drink kombucha.

Not only that, but Gersh says that there have been a few reports of people who have been harmed by drinking kombucha. “These reports include lead poisoning caused from the leaching of lead contained in ceramic containers, with the leaching induced by the kombucha tea itself,” she tells SheKnows. “Other kombucha reports [consist] of nausea and vomiting, allergic reactions, and head and neck pain. Still other reports are of people who were made ill by kombucha contaminated by harmful bacteria and toxins, and of people suffering renal damage due to acidosis induced by the kombucha. Though all these reports were of very small numbers, they cannot be ignored — especially in pregnancy.”

Finally, Gersh cites a 2018 study that found that kombucha could potentially contain or induce the formation of heparin — a dangerous blood thinner and a powerful anticoagulant. “This would pose a potential life threat if present at the time of delivery,” she explains.

The bottom line: put kombucha in the same category as soft cheese and sushi, and avoid it during pregnancy. And as always, when in doubt, ask your doctor about what’s safe and unsafe to consume while you’re expecting.