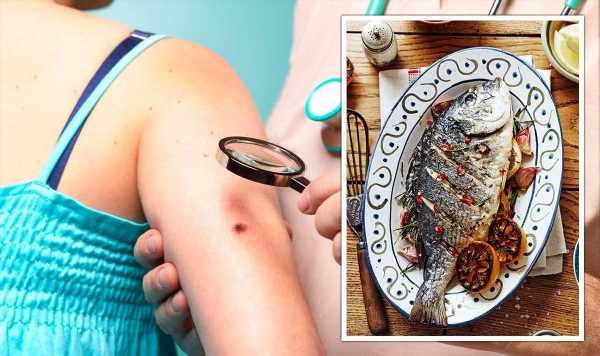 According to research conducted by Brown University in the United States, higher fish consumption may be associated with an increased risk of melanoma.

Their data is published in the journal Cancer Causes and Control.

Researchers found adults whose average intake of fish was over 42.8 grams had a 28 percent increased risk of developing abnormal cells in the outer layer of the skin.

The development of these abnormal cells is also known as stage zero melanoma or melanoma in situ.

READ MORE: Cancer: The specific type of body pain that is one of the ‘most common’ warning signs

In a statement, study author Eunyoung Cho said: “Melanoma is the fifth most common cancer in the USA and the risk of developing melanoma over a lifetime is one in 38 for white people and one in 1,000 for black people.

“Although fish intake has increased in the USA and Europe in recent decades, the results of previous studies investigating associations between fish intake and melanoma risk have been consistent.”

Cho said the study had “identified an association that requires further investigation”.

This is one key point to note, this study is not conclusive; it has merely identified an association requiring further investigation.

As to why fish may cause melanoma, Cho said: “We speculate that our findings could possibly be attributed to contaminants in fish, such as polychlorinated biphenyls, dioxins, arsenic, and mercury.

“Previous research has found that higher fish intake is associated with higher levels of these contaminants and a higher risk of skin cancer.”

While previous studies have investigated this link, Cho was quick to add his study had not, reaffirming the need for more research in this area.

Although a link has been found between fish and skin cancer, it doesn’t mean people should stop buying fish altogether; fish is essential for providing nutrients the body needs for overall health.

As with the United States, skin cancer is not one of the most common cancers in the UK.

However, with the UK becoming warmer, it is likely case numbers will begin to rise.

Due to this predicted increase it is important to know what signs to look out for.

One of the earliest signs of melanoma is the development of a new mole.

The way to tell whether it is mole worthy of concern is through its shape and size.

A normal mole is traditionally round or oval with a smooth edge; they are normally no bigger than 6mm.

Signs of a mole that could be troublesome include one:
• Getting bigger
• Changing shape
• Changing colour
• Bleeding or becoming crusty
• Becoming itchy or sore.

Moles of concern normally have a ragged or notched edge with an irregular shape and are larger than 6mm.