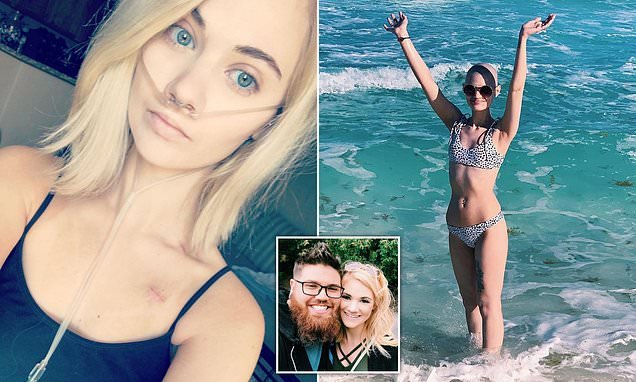 Doctors said it was a ‘cold’ but it turned out to be cancer: 27-year-old was dismissed three times before medics finally gave her a scan and found a 5 inch tumor

A cancer-sufferer says her cough was dismissed three times before she was finally diagnosed with Hodgkin’s lymphoma.

Meagan Bechtold, 27, of Las Vegas, developed a hacking cough in March last year, which doctors wrote off as a bad cold, allergies or bronchitis.

It was not until she due to go on holiday the following July that Mrs Bechtold insisted her symptoms be properly checked out.

A CT scan revealed a 13cm tumour in her diaphragm and Mrs Bechtold started chemotherapy immediately, which caused her to lose 10lbs and left her battling constant nausea.

After her second round of chemo made Mrs Bechtold lose her hair, she decided to take back control and shave her head.

While she continues to battle the disease, Mrs Bechtold has embraced her new look and no longer worries about looking like a ‘cancer patient’. 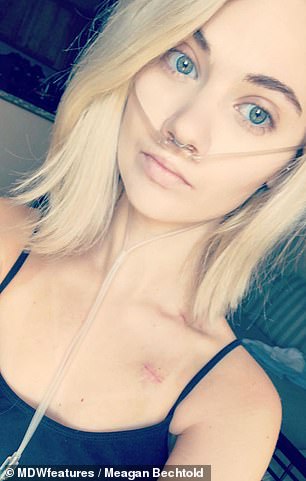 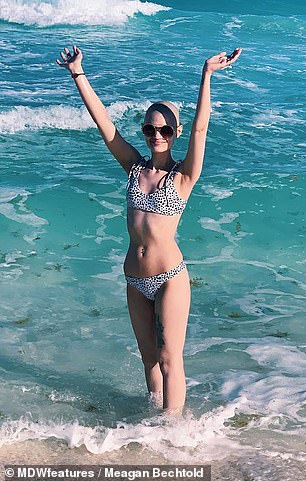 Meagan Bechtold’s cough was dismissed three times before she was diagnosed with Hodgkin’s lymphoma. She is pictured left receiving oxygen after her lungs filled with fluid. When her second round of chemotherapy made Mrs Bechtold lose her hair, she decided to take back control and shave her head. The beauty salon manager is pictured right in Cancun last month 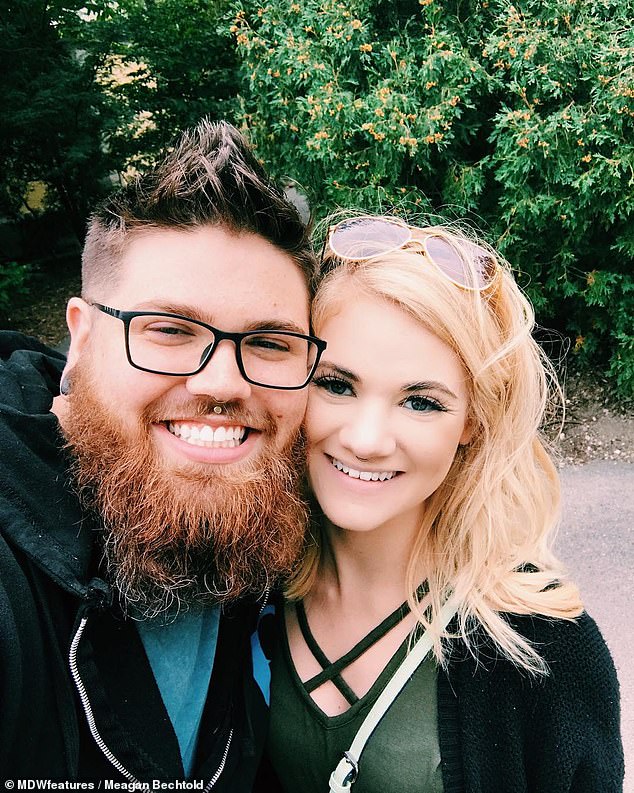 Pictured with her husband Chris before the ordeal, the couple were planning a holiday when Mrs Bechtold insisted her symptoms be properly checked out. Doctors had written them off as a bad cold, allergies or bronchitis but a scan revealed a 13cm tumour in her diaphragm

Mrs Bechtold – who manages a beauty salon – said: ‘I suffered with a dry cough since about March and I also had bronchitis the year prior.

Mrs Bechtold saw the same doctor every time, who advised her she would need an X-ray if the antibiotics he prescribed did not work.

‘One night I was so worried I even Googled “lung cancer” but I brushed it off and listened to what they told me,’ she said.

Ahead of a holiday to Mexico with her husband Chris, Mrs Bechtold insisted on a scan on July 13 last year.

This revealed she had cancer, with the exact diagnosis being confirmed within a week.

‘I was scared out of my mind because I was 26 and just got diagnosed with cancer,’ Mrs Bechtold said.

‘Luckily my doctors explained that if you’re going to get cancer, Hodgkin’s is one of the most curable.’ 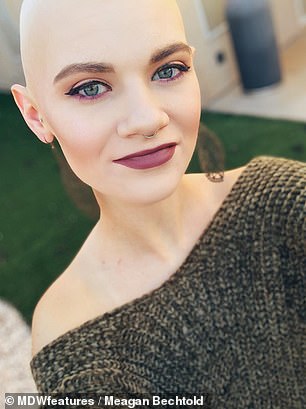 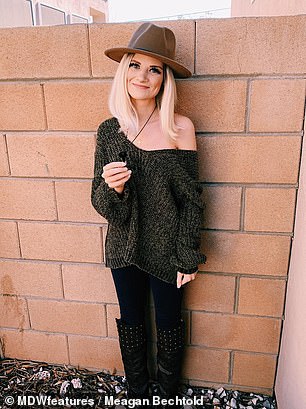 While she continues to battle the disease, Mrs Bechtold has embraced her new look (seen left) and no longer worries about looking like a ‘cancer patient’. Mrs Bechtold described losing her hair as the ‘worst experience’. She is pictured right wearing a wig on New Year’s Day 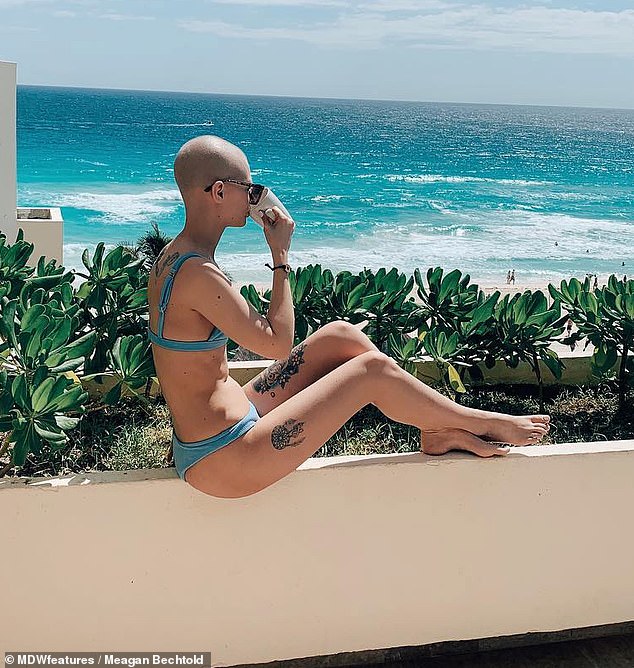 The couple cancelled their holiday while Mrs Bechtold started her first round of chemotherapy.

This caused her to develop mouth sores, only be able to drink water and triggered ‘hibernation’, where she slept continuously for three days.

‘I couldn’t breathe and was constantly hooked up to oxygen for about two months after my diagnosis,’ Mrs Bechtold said.

‘I had drenching night sweats to the point where my husband had to change my hospital sheets and gown almost every night.’

Mrs Bechtold also lost her appetite, which caused her to drop from an already-slim 108lbs (7st 10lb) to just 98lbs (7st). 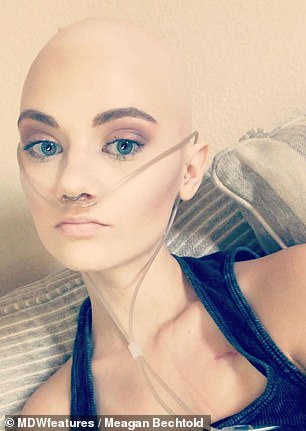 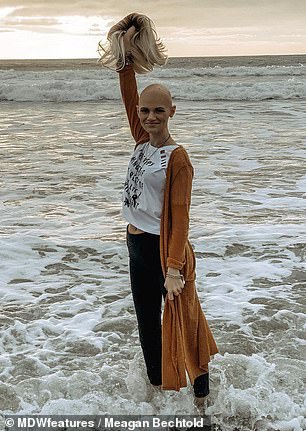 Mrs Bechtold later decided to take control of her hair loss after previously worrying about looking like a ‘cancer patient’.

‘Losing my hair was hands down the most traumatising part of this whole experience,’ she said.

WHAT IS HODGKIN’S LYMPHOMA?

Hodgkin’s lymphoma is a type of cancer that starts in the white blood cells.

It affects around 1,950 people each year in the UK.

A common early symptom is having a painless swelling in the armpits, neck and groin.

It has been linked to people with lowered immunity, a family history of the condition, smokers and those who are overweight.

Treatment may include chemotherapy, radiotherapy, steroids and stem cell or bone marrow transplants.

‘I was completely naive in thinking I would be different and not lose my hair.

‘First it fell out normally as if it was shedding, but then the chunks were getting bigger.’

Mrs Bechtold asked her husband to cut her long hair into a bob.

‘My cute bob lasted about two days until my hair started to matte together and become dreads,’ she said.

‘I started to have bald spots and hair was accumulating everywhere – on the floor, in the sink, on my pillow, in my food.

‘I knew it was inevitable and I would have to shave it, so that day I asked my husband if he would shave it for me and I cried the entire time.

‘My hair was a huge part of my identity and I was extremely blessed with long, thick hair and just like that I felt as if I lost myself completely.

‘I honestly believe that the main reason hair loss is the worst is because that’s the first time you truly look and feel like a cancer patient.’

‘After the hair was gone and I put make-up on the next day I felt liberated and empowered,’ she said.

‘You learn what truly matters during this process and for me hair loss had the biggest impact on my outlook.

‘It was both the absolute worst and the most empowering of experiences.’ 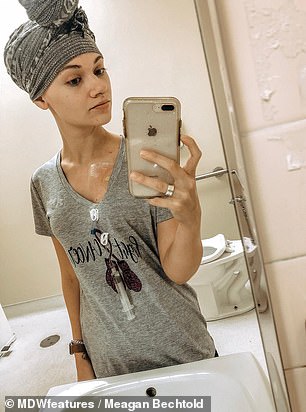 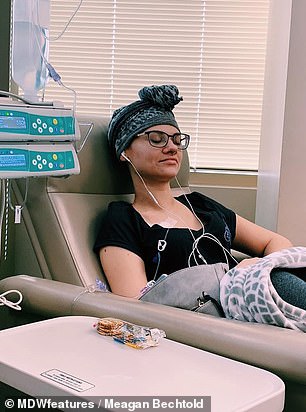 Mrs Bechtold is pictured left on day five of her chemo treatment. Her first round caused Mrs Bechtold to enter ‘hibernation’, where she slept continuously for three days (seen right) 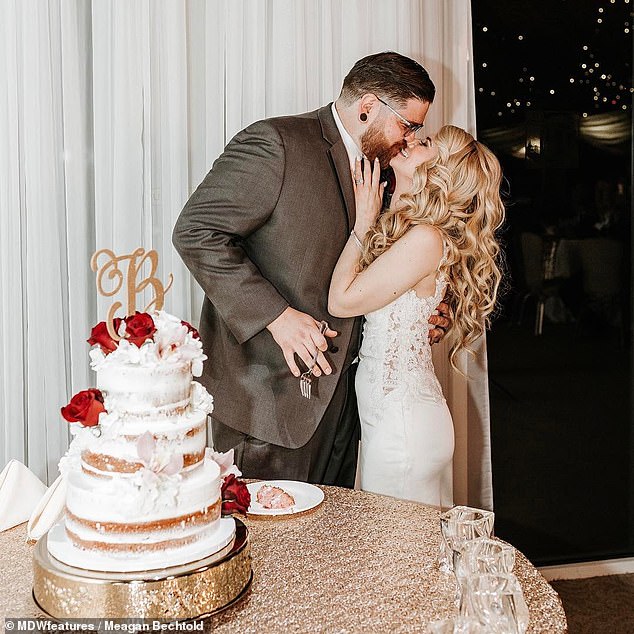 While she continues to battle the disease, Mrs Bechtold is determined to stay positive.

‘Seeing people post their “last chemo” or “officially cancer free” posts were incredibly motivating because I would see these people go through this and then come out the other side stronger than before, and I wanted that for myself,’ she said.

‘My husband and my family tell me every single day how proud they are of me and how strong I am. They pushed me when I felt like giving up.

‘The most important thing during all of this was to never lose sight of the goal, and no matter how bad and ugly things got I had to remember to pick myself up.

‘I learned to let go of the need to control everything.

‘I learned that the most important things in life aren’t things at all and I learned to love every part of myself, including my flaws.’

‘Stressing yourself out about things you have no control over is completely useless,’ she said.

‘By stressing and worrying about tomorrow’s problems, you’re completely ruining your current day.

‘The world would be such a better place if we all loved ourselves and put self-care first.

‘I used to envy people who had more things or were succeeding faster than I was, and now I’m completely happy for them.

‘There is no timeline or requirement for you to accomplish things in life. You decide when things are right for you.’

Find out more about Mrs Bechtold on her Instagram page here.