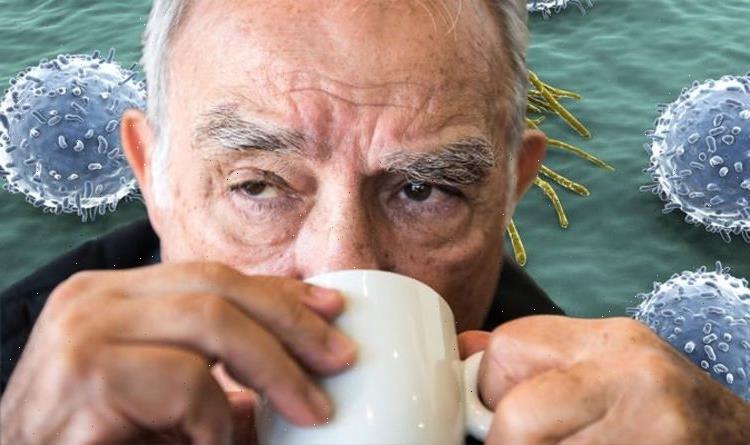 Cancer occurs when damaged cells proliferate in a rapid and uncontrolled fashion. This can cause tumours to spread quickly to different parts of the body, adding to the disease’s deadly nature. Eating a healthy diet offers some of the best chances of staving off the condition. One popular drink has even been shown to halve the risk of the disease.

According to research published in the American Journal of Epidemiology, certain drinks, such as coffee, may offer food protection against cancer due to their antioxidant activity.

Janet Hildebrand, an epidemiologist with the American Cancer Society, explained that the study looked at the coffee drinking habits in nearly one million men and women.

She noted: “Those who reported drinking at least four cups per day of caffeinated coffee incurred about half the risk of dying from mouth and throat cancer compared to people who did not drink caffeinated coffee daily or only drank it occasionally.”

The reduction in risk of nearly half was consistent for those who drank four, five, six cups of coffee daily.

It also was the same for both drinkers of caffeinated and decaffeinated coffee.

The researchers looked at the coffee consumption of men and women who were free of cancer at the outset of the study.

The findings, published in the American Journal of Epidemiology, held even after the researchers accounted for drinking and smoking.

The American Institute for Cancer Research (AICR), explained that “coffee’s phytochemicals are likely responsible for the lower risk of some forms of cancer”.

However, the health body added that the effects of coffee are reaped when the beverage is consumed with no added cream and sugar.

The AICR says: “The added fat and calories can contribute to weight gain – which increases the risk for many types of cancer.”

Coffee is brewed from beans that contain antioxidants, which are well known for their protective effects against cancer and other diseases.

But despite its strong antioxidant activity, drinking coffee in high volumes can have adverse side effects on blood pressure.

According to the NHS, these adverse effects may occur after drinking four cups of caffeinated beverage.

What’s more, roasted coffee beans contain small traces of the chemical acrylamide, which can be harmful when consumed in high amounts.

Mouth cancer symptoms Mouth cancer has a survival rate of about 81 percent if diagnosed in the initial stages.

Many cases of the disease, however, are discovered in the later stages when the disease is more difficult to treat.

According to the NHS, symptoms of the condition can include mouth ulcers that are painful and do not heal within several weeks.

The health body adds that “persistent lumps in the mouth or the neck that do not go away” could also be indicative of cancer.

According to Share Care, mouth cancer has a death rate of around 45 percent at five years of diagnosis.