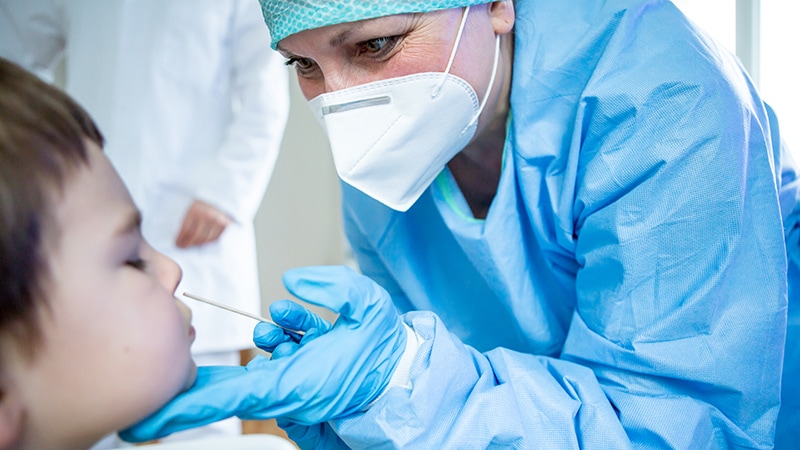 Weekly cases of COVID-19 in children jumped by nearly 50% in the United States, posting the highest count since hitting a pandemic high back in mid-January, a new report shows. 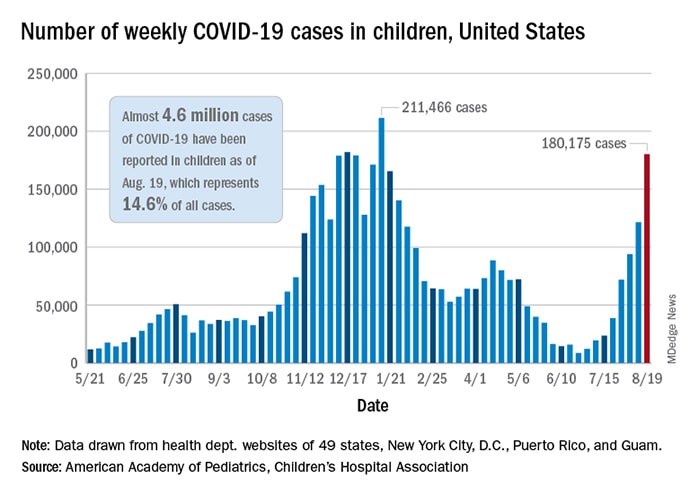 The 180,175 new cases reported during Aug. 13-19 represent the highest 1-week total since the peak of 211,466 during the week of Jan. 8-14. The latest weekly figure represents a 48% increase over the previous week and an increase of over 2,000% in the 8 weeks since the national count dropped to a low of 8,500 cases for the week of June 18-24, the American Academy of Pediatrics and the Children’s Hospital Association said in their weekly COVID report.

Vaccinations, in the meantime, appear to be headed in the opposite direction. Vaccine initiations were down for the second consecutive week, falling by 18% among 12- to 15-year-olds and by 15% in those aged 16-17 years, according to data from the Centers for Disease Control and Prevention.

Nationally, about 47% of children aged 12-15 and 56% of those aged 16-17 have received at least one dose of COVID vaccine as of Aug. 23, with 34% and 44%, respectively, reaching full vaccination. The total number of children with at least one dose is 11.6 million, including a relatively small number (about 200,000) of children under age 12 years, the CDC said on its COVID Data Tracker.

At the state level, vaccination is a source of considerable disparity. In Vermont, 73% of children aged 12-17 had received at least one dose by Aug. 18, and 63% were fully vaccinated. In Wyoming, however, just 25% of children had received at least one dose (17% are fully vaccinated), while Alabama has a lowest-in-the-nation full vaccination rate of 14%, based on a separate AAP analysis of CDC data.

There are seven states in which over 60% of 12- to 17-year-olds have at least started the vaccine regimen and five states where less than 30% have received at least one dose, the AAP noted.

Back on the incidence side of the pandemic, Mississippi and Hawaii had the largest increases in new cases over the past 2 weeks, followed by Florida and West Virginia. Cumulative figures show that California has had the most cases overall in children (550,337), Vermont has the highest proportion of all cases in children (22.9%), and Rhode Island has the highest rate of cases per 100,000 (10,636), the AAP and CHA said in the joint report based on data from 49 states, the District of Columbia, New York City, Puerto Rico, and Guam.

Add up all those jurisdictions, and it works out to 4.6 million children infected with SARS-CoV-2 as of Aug. 19, with children representing 14.6% of all cases since the start of the pandemic. There have been over 18,000 hospitalizations so far, which is just 2.3% of the total for all ages in the 23 states (and New York City) that are reporting such data on their health department websites, the AAP and CHA said.

The number of COVID-related deaths in children is now 402 after the largest 1-week increase (24) since late May of 2020, when the AAP/CHA coverage began. Mortality data by age are available from 44 states, New York City, Puerto Rico, and Guam.