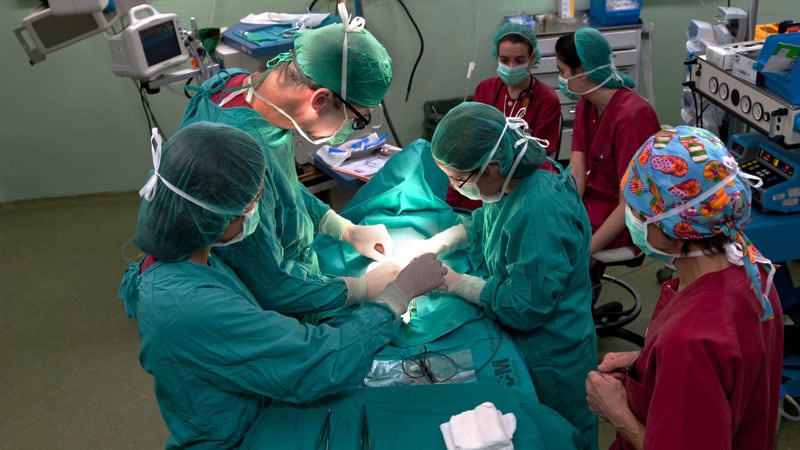 Complete gross resection is much less likely for advanced ovarian cancer in women with mesenchymal tumors and complex preoperative CT findings, according to a report at the Society of Gynecologic Oncology annual meeting.

The findings speak to a common dilemma in advanced ovarian cancer, whether women should have surgery or chemotherapy first. Part of the decision hinges on the likelihood of surgical success, explained lead investigator Diogo Torres, MD, a gynecologic oncologist at Ochsner Health in New Orleans.

He and his team concluded that “preoperative CT imaging combined with tumor molecular subtyping can identify a subset of women for whom successful primary surgery is unlikely. Preoperative tumor sampling may be useful in advanced [ovarian cancer] to better triage these cases to alternative approaches.”

For years “we’ve been trying to figure out” how best to make the call between primary debulking and neoadjuvant chemotherapy, said Pamela T. Soliman, MD, MPH, a gynecologic oncologist at the University of Texas MD Anderson Cancer Center, Houston, who discussed the abstract at the meeting.

Imaging alone or CA-125 are often used to make the decision, but they’re unreliable. Diagnostic laparoscopy is accurate, but it isn’t used much, she said.

What’s unique about Torres’s approach is that, by including tumor subtype, it incorporates tumor biology. It makes sense because his team previously found that women with mesenchymal (MES) tumors are more likely than those with other subtypes to have upper abdominal and miliary disease.

The approach needs validation in a larger study, but “I really commend” the team “for incorporating biology into the decision-making because it is clearly a step in the right direction,” Soliman said.

Fifty-nine women (46%) were classified as “CT high,” meaning that they had two or more of those findings. Women with no more than one were categorized as “CT low.”

Patients with MES tumors and CT-high disease had the lowest rates of complete resections, 8% versus 46% for the entire cohort and 72% for non-MES, CT-low women. MES, CT-high women were also the most likely to have high-complexity surgery (81% versus 35% in the non-MES, CT-low group).

Adjusting for age, stage, and American Society of Anesthesiologists score, the odds of high-complexity surgery were 9.53 times higher and the odds of something less than a complete resection were 26.73 times greater in MES, CT-high patients, compared with non-MES, CT-low women.

“Further studies are needed to evaluate and validate this model using preoperative biopsy specimens” instead of surgical specimens, the investigators said.

No funding was reported for the work. Torres didn’t have any disclosures. Soliman is an adviser for Eisai and Amgen, a consultant for Medscape, and receives research funding from Novartis and Incyte.