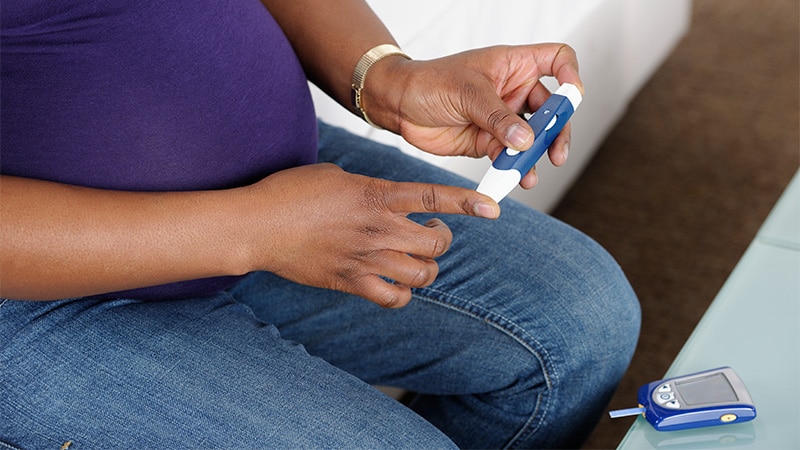 Between 2014 and 2020, the frequency of adverse pregnancy outcomes in the United States increased among women with gestational diabetes, with persisting differences in adverse outcomes by race and ethnicity, according to a report in JAMA

“[Previous] population-based studies on racial and ethnic disparities in gestational diabetes have focused on differences in the rate of diagnosis, rather than adverse pregnancy outcomes,” lead author Kartik K. Venkatesh, MD, PhD, of Ohio State University, Columbus, and colleagues explained.

The researchers conducted a cross-sectional, descriptive study to evaluate whether the frequency of adverse pregnancy outcomes with gestational diabetes changed over time and whether the risk of these outcomes differed by maternal race and ethnicity.

The data were obtained from the Centers for Disease Control and Prevention’s National Center for Health Statistics Natality Files. Exposures of interest were year of delivery, as well as race and ethnicity.

From 2014 through 2020, differences in adverse outcomes by race and ethnicity persisted; in comparison with Whites, Black participants were at significantly higher risk of all evaluated outcomes, except for macrosomia and large for gestational age.

Hispanic/Latina and Asian/Pacific Islander individuals were also at significantly higher risk of preterm birth, NICU admission, maternal ICU admission, and small for gestational age. Furthermore, American Indian participants were at significantly higher risk of all evaluated outcomes, except for cesarean delivery and small for gestational age.

Health policy researcher Felicia Hill-Briggs, PhD, at the Feinstein Institutes for Medical Research in Manhasset, N.Y. commented: “Two alarming trends highlighted by this study: 1) Racial and ethnic inequities in adverse gestational diabetes outcomes; and 2) the rising rates of gestational diabetes overall – both must and can be halted.”

“Optimizing medical management of gestational diabetes, whether through improved access to diabetes care in pregnancy, behavioral interventions, and pharmacotherapy can decrease the risk of adverse pregnancy outcomes,” Venkatesh commented. “It is possible that the equitable delivery of these interventions to address glycemic control could decrease racial and ethnic disparities in adverse pregnancy outcomes among individuals with gestational diabetes.”

Venkatesh and his colleagues acknowledged that a key limitation of the study was the use of administrative data; thus, inferences on maternal care improvements could not be determined.

“Further research could focus on greater understanding of racial and ethnic differences in the management of gestational diabetes,” the researchers concluded.