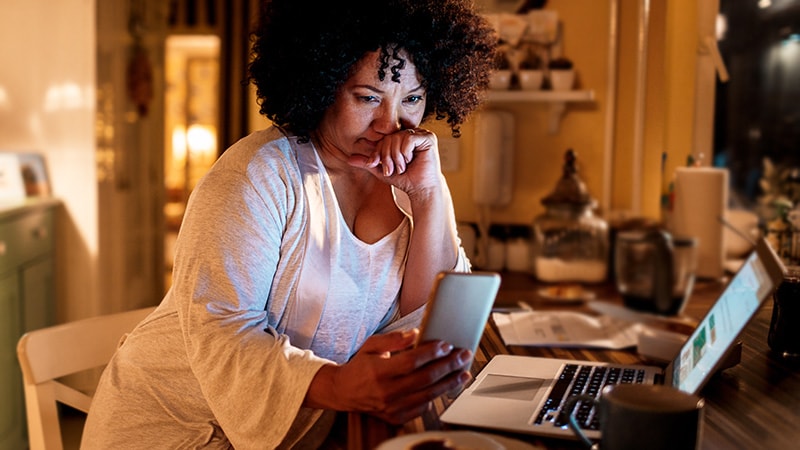 “Doomscrolling” or “doomsurfing” the news is fairly common and raises the risk for poor mental as well as poor physical health, new research suggests.

The past 2 years have been filled with worrisome global events, from the pandemic to the war in Ukraine, large-scale protests, mass shootings, and devastating wildfires. The 24-hour media coverage of these events can take a toll on “news addicts” who have an excessive urge to constantly check the news, researchers note.

Results from an online survey of more than 1000 adults showed that nearly 17% showed signs of “severely problematic” news consumption.

These “doomscrollers” or “doomsurfers” scored high on all five problematic news consumption dimensions: being absorbed in news content, consumed by thoughts about the news, attempting to alleviate feelings of threat by consuming more news, losing control over news consumption, and having news consumption interfere in daily life.

“We anticipated that a sizable portion of our sample would show signs of problematic news consumption. However, we were surprised to find that 17% of study participants suffer from the most severe level of problematic news consumption,” lead author Bryan McLaughlin, PhD, Texas Tech University in Lubbock, told Medscape Medical News. “This is certainly concerning and suggests the problem may be more widespread than we expected,” he said.

In addition, 74% of those with severe levels of problematic news consumption reported experiencing mental problems and 61% reported physical problems.

“It’s important for healthcare providers to be aware that problematic news consumption may be a significant driver of mental and physical ill-being, especially because a lot of people might be unaware of the negative impact the news is having on their health,” McLaughlin said.

The findings were published online August 24 in Health Communication.

The researchers assessed data from an online survey of 1100 adults (mean age, 40.5 years; 51% women) in the United States who were recruited in August 2021.

Perhaps not surprisingly, respondents with higher levels of problematic news consumption were significantly more likely to experience mental and physical ill-being than those with lower levels, even after accounting for demographics, personality traits, and overall news use, the researchers note.

Nearly three quarters (74%) of those with severe levels of problematic news consumption reported experiencing mental ill-being “quite a bit” or “very much” — whereas frequent symptoms were only reported by 8% of all other study participants.

In addition, 61% of adults with severe problematic news consumption reported experiencing physical ill-being “quite a bit” or “very much” compared with only 6.1% for all other study participants.

McLaughlin noted that one way to combat this problem is to help individuals develop a healthier relationship with the news — and mindfulness training may be one way to accomplish that.

“We have some preliminary evidence that individuals with high levels of mindfulness are much less susceptible to developing higher levels of problematic news consumption,” he said.

“Given this, mindfulness-based training could potentially help problematic news consumers follow the news without becoming so emotionally invested in it. We hope to examine the effectiveness of a mindfulness intervention in our future research,” he added.

The survey by McLaughlin and colleagues “appears to be representative and has sufficient statistical power to address the issues,” said Thorp, who was not involved with the research.

“However, as the researchers note, it is a cross-sectional and correlational survey. So it’s possible that, as implied, people who ‘doomscroll’ are more likely to have physical and mental health problems that interfere with their functioning,” he added.

It is also possible that individuals with physical and mental health problems are more likely to be isolated and have restricted activities, thus leading to greater news consumption, Thorp noted. Alternatively, there could be an independent link between health and news consumption.

Most news is “sensational and not representative,” Thorp pointed out.

“News also tends to be negative, rather than uplifting, and most news is not directly relevant to a person’s day-to-day functioning. Thus, for most people, the consumption of news may have more downsides than upsides,” Thorp added.

Still, many people want to stay informed about national and international events. So rather than following a “cold turkey” or abstinence model of stopping all news consumption, individuals could consider a “harm reduction” model of reducing time spent consuming news, Thorp noted.

Another thing to consider is the news source. “Some outlets and social media sites are designed to instill outrage, fear, or anger and to increase polarization, while others have been shown to provide balanced and less sensational coverage,” Thorp said.

“I also think it’s a good idea for providers to regularly ask about news consumption, along with learning about other daily activities that may enhance or diminish mental and physical health,” he added.

The research had no specific funding. McLaughlin and Thorp have reported no relevant financial relationships.