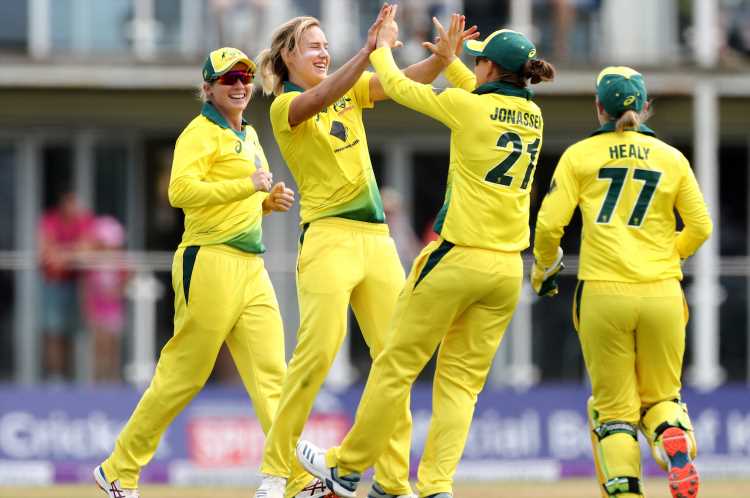 An astounding spell of new-ball bowling from Ellyse Perry in Canterbury has handed Australia a Women’s Ashes ODI clean sweep.

In taking 7/22 from her 10 overs, Perry set a new benchmark for the best figures by an Australian in women’s ODIs and gave her side a valuable clean sweep heading into the Test match.

England fell a mere 195 runs short of their 270 target, capitulating for just 75.

The rout started almost immediately, as Perry dismissed Amy Jones with the third ball of the innings, and also for the third time this series.

Perry’s second over was the cue for wickets two and three, sending Tammy Beaumont and Sarah Taylor back to the sheds in successive deliveries to leave England reeling at 3/5.

Her fifth over brought about another two wickets, and the hosts were a barely believable 6/21.

Perry’s first spell of seven overs brought figures of 5/18, and after a brief rest she was back to cause more carnage.

Breaking through the defences of Anya Shrubsole brought Perry’s sixth, and a chip from Sophie Ecclestone to mid-off meant the Australian finished with the country’s best ever bowling figures in a women’s one day international.

Earlier, after the first two matches of the series ended in tight Australian victories from run chases, England opted to send the visitors in once they won the toss.

Despite the early loss of Nicole Bolton, run-a-ball innings from Alyssa Healy (68 off 66) and Meg Lanning (69 off 68) put Australia in a commanding position until they both fell via ugly dismissals to Nat Sciver (3-51).

Healy holed out to Danni Wyatt at deep midwicket for 68 from a half-tracker, the type of ball she clouted to the boundary numerous times in her knock.

Lanning, comfortably looking in the best touch she has this tour, was trying to guide a ball to the legside when she hit a leading edge to Fran Wilson at point.

Sciver completed a triumvirate of big wickets when Ellyse Perry (7) nicked behind attempting a cut shot.

Australia struggled to find any rhythm after this point with Beth Mooney (19) trapped in front by Kate Cross (1-55), Rachael Haynes (12), caught and bowled by Sophie Ecclestone (1-50) and Ashleigh Gardner (29) bowled by Laura Marsh (1-50).

Jess Jonassen (24) and Delissa Kimmince (18) were the not out batters, and although it appeared 7/269 was slightly under what Australia was expecting at the halfway mark, it proved to be more than enough.

Australia now has nearly two weeks until the Test against England begins, with a three-day match against the England Academy beforehand to gain some valuable red-ball preparation.

This article originally appeared on 7news.com.au