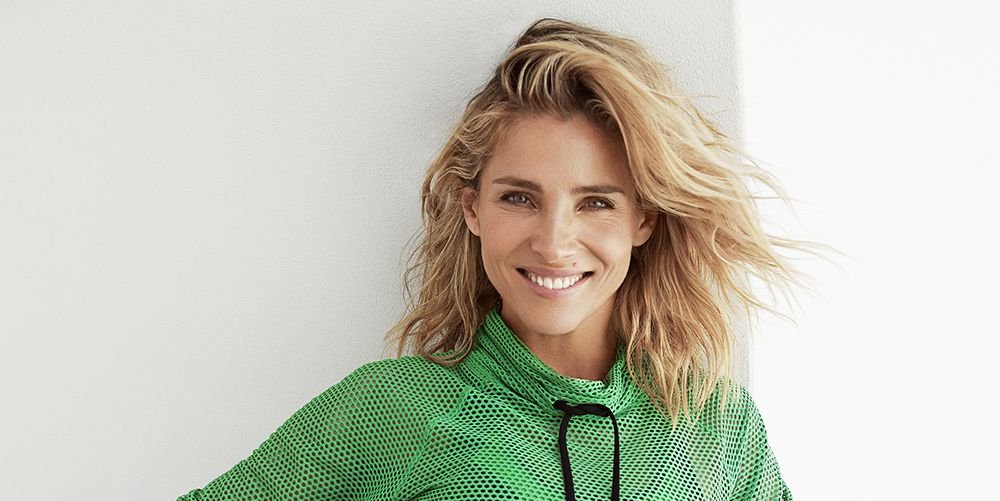 She’s part of one of the hottest A-list couples on earth, but for Elsa Pataky, the bright lights of Hollywood can’t beat the chilled vibe of Byron. Here, the actor and fitness junkie talks barefoot parenting, fasting with Chris and her new project that’s set to slay the wellness industry.

As Elsa Pataky poses on a balcony overlooking Byron Bay’s rolling hinterland, the sea in the distance barely visible through the hazy afternoon heat, our photoshoot set is suddenly invaded. By a six-year-old. Elsa’s daughter India bundles her for a hug that makes even our seasoned photographer melt.

It’s a family affair today, with Elsa’s mum, sister-in-law and cousin (all either visiting from Europe or living in Byron) stopping by to see the 42-year-old Spanish actor do her thing. Her filmmaker brother Cristian Medianu is here to capture footage for a new digital project she’s part of (more on that in a moment).

The most obvious person missing? Elsa’s husband–you may have heard of him–Chris Hemsworth. Just a day before, the Avengers star was posing for photos of his own in this same for-hire house (not far from a headline-makingly-huge home being built by the couple, who relocated here from LA in 2014). You see, at the same time as Elsa stars in this magazine, Chris is on the cover of Australian Men’s Health, in a world-first exclusive reveal of his brand-new lifestyle app.

Let us introduce you to Centr (@centrfit), a holistic program that takes you behind the scenes with Chris and Elsa to deliver their curation of A-list workouts, recipes and wellness inspiration. Here’s a taster: fitness content from celebrity trainer Gunnar Peterson (he’s honed the bods of everyone from Jennifer Lopez to the LA Lakers), martial arts and HIIT pro Tiffiny Hall and Elsa’s own Byronbased yoga instructor Tahl Rinsky. Then there are the step-by-step meal ideas from Aussie favourite, chef Dan Churchill, plus a heap of expert-led sleep visualisations, motivation tips, mindfulness and mental health features (see p81 for more). And the best part about it? The program is personalised to your goals (weight management? Strength building?), food (vegan? Gluten-free?) and workout tastes.

“Chris had this idea, because he’s been working out for such a long time … and he had trainers all around the world,” says Elsa, between bites of a belated lunch (roast beef and salad) after our shoot. “I [had] the same. Working on my body and travelling all the places in the world, you meet so many people [who] give you all these tips.

“The reason we created this program [was to bring together] all the people we think are really good in fitness, nutrition and mindfulness. I think those three things are very important to keep healthy and happy. Chris put it all together, but I wanted to be part of it for my knowledge, too. I do beauty, nutrition and a little bit of yoga. We have really cool chefs–we’ve been working to find them all around the world–so you have videos of easy recipes and how to do them. Even lunchbox ideas for mums.”

Madrid-born Elsa’s love of a sweat session dates back to pre- Hollywood and pre-Hemsworth. “I’ve been working out since I was 16 or 17 years old,” she says. “I’ve always been a fan of fitness bodies, in men too–but more in women. I was focused, like, ‘Oh, I want to have a body like that.’ I love the athletes–they [are] all fit with muscles, and strong–so I’ve been working out for many years just to find what is good for me.”

What’s good for her now looks like this: weight training three times a week for an intense 30 minutes, plus time for stretching, and then one or two yoga workouts. Between set changes on our shoot, she does squats and stretches to “feel strong” and energised. She’s a fan of ‘exercise-snacking’ like this–busting out a few moves whenever and wherever she has a spare moment.

“I can’t be without training for more than two weeks–I just get really nervous and my energy starts to go down,” she says. “When you start working out and your body’s changing and you’re achieving your goals, that’s such a great thing. So, I think that’s the motivation [to exercise]–feeling better and just being happy with you and knowing that you’re healthy. If you know you’re taking care of your body and you’re doing it for a reason, you can put aside the, ‘I can’t do it.’”

As for the yoga, which she’s been practising for eight years, Elsa’s style is more personalised than purist, incorporating extra abs and glute work to make it “strong” to “feel that I’m working out, too”.

“I hate extremes in everything, so I just always love to kind of be in the middle.”

“It’s just like another kind of energy you have in yoga,” Elsa says. “It’s also for your mind. At the end you have that moment of laying down and five minutes of like [does an exaggerated exhale]. Kind of like a meditation. I think that’s really important for your brain and to come down. At the end of the yoga, it’s just good for me to lay down and think about nothing…or try to [laughs].”

All this sweat-breaking is fuelled by an eating approach that’s probably best described as AIF: accidental intermittent fasting. As most parents know, getting kids ready in the morning can eat into your, well, eating time, and it’s no different for this mum of three under seven (India’s siblings are four-year-old twin boys Sasha and Tristan). “My husband is doing a lot of fasting now,” Elsa reveals. “And me, because of the kids and the run in the morning, you end up not [eating] anything–you have to get their stuff and their clothes and everything–so, without knowing, I’m fasting anyway [laughs]. Chris is like, ‘You’re fasting’ and I’m like, ‘I’m not’, and then I realise at 12 o’clock, Whoa, I haven’t eaten anything!’”

“I love horseriding, so that’s my meditation. [For] Chris, surfing is his form of meditation … just going out in the water [with] nothing that bothers you, no cellphones, no noise. That’s the same for me when I go on the beach with the horse–it’s just nothing else but you and the horse. It’s beautiful. Everyone has to find their own passion. Finding the time is sometimes … difficult, but … I feel like we really have to find that time … to be happy. Those moments are really important.”

When she does have brekkie, it’ll either be some of the kids’ porridge or a protein shake (she brings a green one to our shoot) packed with greens, berries, natural protein and spices such as turmeric. Her recipes change daily, also bringing in frozen cauliflower, spinach, banana and nut butters. Lunch is likely a combination of veggies, salad and fish (she loves sushi) and the same goes for dinner. At one stage, she spent three months on a macrobiotic diet–a strict plant-based, often-vegan approach–before settling on a more relaxed middle ground that she feels works for her body and lifestyle.

“I hate extremes in everything, so I just always love to kind of be in the middle,” Elsa says. “I learnt a lot about [macrobiotics], but I need other things also. You have to find what your body craves and what is good for it.” Finding this happy balance means still eating meat, albeit less than she used to (now, once a week or less), feasting on veggies (“seaweeds are great”) and enjoying some carbs. “For a while, [everyone] was like, ‘No carbohydrates’, [which] I think is a big mistake,” she adds. “You need them for your energy.”

Famous in her own right way before she met Chris, Elsa has an IMDB profile with credits dating back to the ’90s, from Spanish TV shows to four of the Fast and the Furious movies. Her latest? The role of enigmatic half-siren Adrielle Cuthbert in mystery Tidelands, the first Netflix original TV series made in Australia, which aired in December. For Elsa, the project came at the perfect time. “I was not working that much, because I really wanted to [spend] all my time with my kids and family,” she says. “I [had] worked a lot … and it was a good moment for Chris to keep going and do all that he’s doing in his career, so [for] a few years I hadn’t done much. [But] now our kids are a little bit older, so I have more time. Then this project came [along] and they were shooting [nearby on the] Gold Coast and in Brisbane. The two leads are really powerful, strong women and it’s based in a half-real, half-fantasy story, so I instantly loved it.”

She adds that her casting reflects progression in the industry, with more diverse opportunities for women and people of different nationalities. “I feel like when I got to LA [early in my career], nobody would hire you [unless] you’re doing the Spanish person or character,” recalls Elsa, who name checks Frida Kahlo and Katharine Hepburn as examples of women who inspire her. “Now it’s getting so much better. Like Wonder Woman [actress Gal Gadot], she has an accent–she’s Israeli–and that’s amazing. [Gal] is a friend of mine and I was like, ‘It wouldn’t have been possible years ago.’ And now people are more interested in female characters no matter what age–you don’t have to be the young girl–and creating the stories for women, which is great. But, in [Tidelands], the male characters are really interesting too. It has to be balanced, I think.”

A tale of two homes

Elsa’s European heritage is important to her (her language resume reads: French, Italian, Romanian, Spanish, English. Yep, five of them) and she’s an ambassador for Spanish tourism. She jokes that her Hispanic fieriness can draw attention in laid-back Australia. “[We Spaniards] are so passionate about everything, and when you love something, you love it,” she laughs.

“Everybody here, when they tell off their kids, they’re like [mimics whispering], but we are totally the opposite. It’s so funny because on the beaches in Spain, you hear the mums like, ‘Paolo [yells in Spanish]!’ We are really loud and sometimes Chris gets really embarrassed. He’s like, ‘Stop it, everyone’s looking at us.’”

But, it’s Byron she now sees as home. “I grew up in the city, so my dream was always [to be] surrounded by green nature, animals and wildness,” she remembers. “That was my dream–to live in a place like this. It has a different energy. I love the people here [and] you become a local because it’s very small. My kids and I, we’re all barefoot and outside and they’re running around [with] so much freedom. I feel really lucky.”

And with that, Elsa’s off. She has to get to India’s school play, so she gives the whole crew a hug before jumping behind the wheel and driving away. We pack up, ready to go catch the flight back to Sydney–already planning how to score an invite to the next Pataky-Hemsworth family dinner.

Centr’d: Want to do yoga with Elsa then cook with her? Steal Thor’s arm workout? Now’s your chance. New app Centr brings you fitness, nutrition and wellbeing content from a squad that’s been hand-picked by Chris and Elsa. Yep, these are the pros they know and trust from right around the world. The line-up includes: Hollywood and Thor stuntman Bobby Holland Hanton; Chris’ main trainer Luke Zocchi; Joseph Sakoda, the guy who whips Navy SEALS into shape; trainer Jorge Blanco, who has worked with Meghan Markle; and Victoria’s Secret PT Michael Olajide Jr. Plus, top foodies such as plant-based guru Simon Hill and celebrity chefs Darren Robertson and Sergio Perera. Talk about star treatment. Sound good?

Then visit centr.com for all the details and download the app via the App Store.