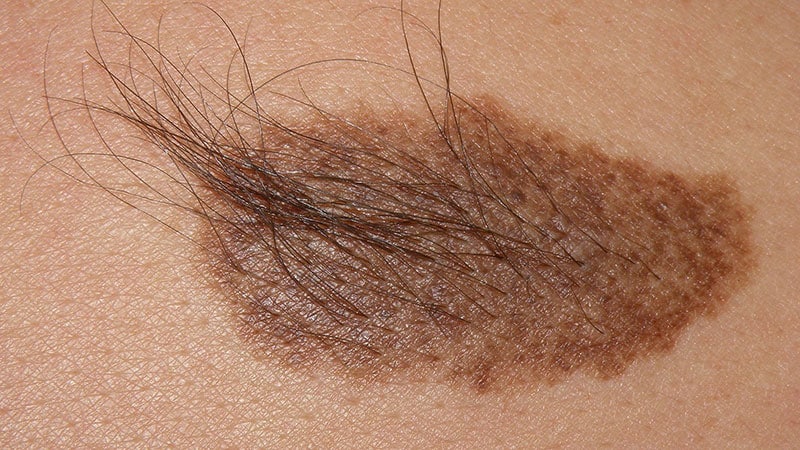 During an oral abstract session at the annual meeting of the American Society for Dermatologic Surgery, presenting author Shelby L. Kubicki, MD, said that NAFR and LHR target the clinically bothersome Becker’s nevi features of hyperpigmentation and hypertrichosis via different mechanisms. “NAFR creates microcolumns of thermal injury in the skin, which improves hyperpigmentation,” explained Kubicki, a 3rd-year dermatology resident at University of Texas Health Sciences Center/University of Texas MD Anderson Cancer Center, both in Houston.

“LHR targets follicular melanocytes, which are located more deeply in the dermis,” she said. “This improves hypertrichosis and likely prevents recurrence of hyperpigmentation by targeting these melanocytes that are not reached by NAFR.”

Kubicki and her colleagues retrospectively reviewed 12 patients with Becker’s nevus who underwent a mean of 5.3 NAFR treatments at a single dermatology practice at intervals that ranged between 1 and 4 months. The long-pulsed 755-nm alexandrite laser was used for study participants with skin types I-III, while the long-pulsed 1,064-nm Nd: YAG laser was used for those with skin types IV-VI. Ten of the 12 patients underwent concomitant LHR with one of the two devices and three independent physicians used a 5-point visual analog scale (VAS) to rate clinical photographs. All patients completed a strict pre- and postoperative regimen with either 4% hydroquinone or topical 3% tranexamic acid and broad-spectrum sunscreen and postoperative treatment with a midpotency topical corticosteroid for 3 days.

The study is the largest known case series of therapy combining 1,550-nm NAFR and LHR for Becker’s nevus patients with skin types III-VI.

No long-term adverse events were observed during follow-up, which ranged from 6 to 40 weeks. “We do want more long-term follow-up,” Kubicki said, noting that there are more data on some patients to extend the follow-up.

She and her coinvestigators concluded that the results show that treatment with a combination of NAFR and LHR safely addresses both hyperpigmentation and hypertrichosis in Becker’s nevi. “In addition, LHR likely prevents recurrence of hyperpigmentation by targeting follicular melanocytes,” she said. “In our study, we did have one patient experience recurrence of a Becker’s nevus during follow-up, but [the rest] did not, which we considered a success.”

Vincent Richer, MD, a Vancouver-based medical and cosmetic dermatologist who was asked to comment on the study, characterized Becker’s nevus as a difficult-to-treat condition that is made even more difficult to treat in skin types III-VI.

“Combining laser hair removal using appropriate wavelengths with 1,550-nm nonablative fractional resurfacing yielded good clinical results with few recurrences,” he said in an interview with this news organization. “Though it was a small series, it definitely is an interesting option for practicing dermatologists who encounter patients interested in improving the appearance of a Becker’s nevus.”

The researchers reported having no relevant disclosures.