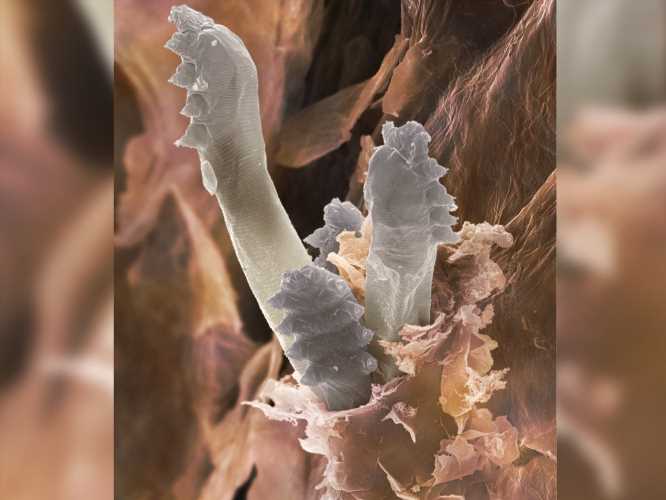 Don't freak out, but you probably have a few dozen arachnids grinding up on the tiny shafts of hair lodged inside your face, quietly gorging themselves on your natural oils.

OK, you can freak out if you want. But there's nothing wrong with you. These tick-like arachnids are known as face mites (in the genus Demodex) and, according to a skin-tingling new video created by the folks at KQED San Francisco, they live a peaceful life buried in the facial pores of most human adults. (The mites are not found on babies, and they are thought to be transmitted through motherly contact.)

These creepy-crawlies are eight-legged, mostly transparent and microscopic in size, measuring about 0.01 inches (0.3 millimeters) apiece, according to an NPR article accompanying the new video. They live near the roots of facial hair follicles on both men and women, hidden away inside your pores. [10 Reasons Why Humans Are So Gross]

What's the draw of these cramped living quarters? Consider it easy access to an all-you-can-slurp buffet of sebum — the waxy oil your face excretes to keep hydrated. Sebum is produced by glands tucked inside your pores, near the bottom of your hair follicles; Demodex mites seek out this greasy meal ticket by burrowing face-first into those pores, where they sleep by day. At night, when you're asleep, they crawl onto the surface of your skin to mate. That's right — there's a nightly mite party on your face, and you're not invited.

Given their dietary preferences, face mites are attracted to the greasiest pores on your body, including those around the cheeks, nose and forehead. According to a study published in 1992 in the journal Clinical and Experimental Dermatology, infested follicles can hold a half-dozen mites at once, with room for many more. Each mite can live for about two weeks. These mites pose no known threats to humans, unless they amass in truly huge numbers, sometimes leading to a disease called demodicosis, or demodectic mange. In humans, demodicosis can cause a red or white sheen to form on the skin, and it is often associated with a decline in immune-system response, Kanade Shinkai, a dermatologist at the University of California, San Francisco, told NPR.

But the condition is rare, Shinkai said, and most people live peacefully with their face mites until old age. Just think, in your lifetime, your nose could serve as the family home to hundreds of generations of grease-swilling, nocturnal-partying arachnids. If the thought doesn't fill your pores with pride, consider one last silver lining: You probably won't ever have to clean up after your Demodex houseguests. As KQED points out in the video, face mites have no anus, instead storing their poop in their bodies for the full duration of their brief lives. Now that's just good manners.