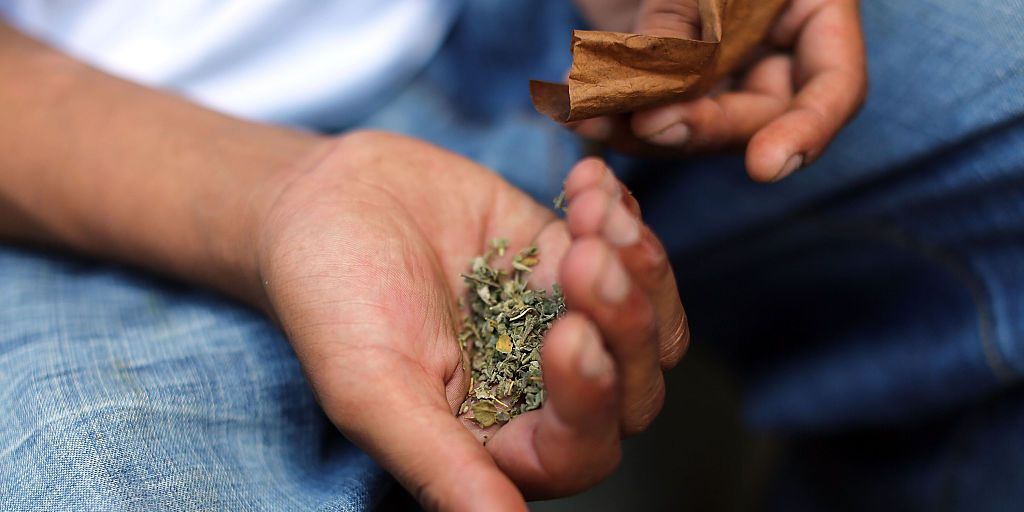 Recreational adult marijuana use is now legal in nine states and Washington, D.C. So it’s no surprise that more and more people are looking to get their hands on the ganj. But in states like Illinois, where marijuana is still illegal, some people are instead ingesting synthetic marijuana, an incredibly dangerous substance that is said to mimic the high you get from pot.

In March 2018 alone, 38 people visited emergency rooms in the state after ingesting synthetic marijuana, also known as Spice or K2, a synthetic product legally sold in convenience stores. Their symptoms ranged from severe bleeding from the eyes and ears to coughing up blood and having a severe bloody nose, according to Illinois’ Department of Public Health. On Saturday, one person even died after consuming the drug, the Chicago Tribune reported.

“Despite the perception that synthetic cannabinoids are safe and a legal alternative to marijuana, many are illegal and can cause severe illness,” Nirav D. Shah, director of the Illinois Department of Public Health, said in a statement. “The recent cases of severe bleeding are evidence of the harm synthetic cannabinoids can cause.”

Now, public health experts are warning people once again about the dangers of synthetic marijuana.

What is synthetic marijuana?

Synthetic marijuana is typically made up of dried and shredded plant material, which is meant to look like marijuana. That material is then doused with any number of chemicals, including synthetic cannabinoids that are meant to get the user high.

According to Leafly, these chemicals work by binding to the same system of receptors in our brains as tetrahydrocannabinol (THC), the primary psychoactive ingredient in herbal cannabis. In some cases, synthetic marijuana can be two to 100 times more potent than naturally occurring THC.

Why are doctors freaking out about synthetic marijuana?

This isn’t the first time that people have overdosed on synthetic marijuana. In 2017, more than 100 people in Lancaster, Pa., were admitted to the hospital after overdosing on K2. Similar outbreaks have also occurred in New York City, which saw more than 6,000 emergency room visits as a result of K2 in 2015.

Part of what makes synthetic cannabis so dangerous is that there’s often no way to tell what chemicals are in the drug. According to the University of Arkansas for Medical Sciences, there are now more than 150 different types of synthetic marijuana compounds now on the market, and the Centers for Disease Control and Prevention has issued a statement saying there are “no standards for making, packaging, or selling synthetic cannabinoid chemicals. That means that two packets of a brand-named product may have completely different chemicals.”

Furthermore, synthetic marijuana products may also be contaminated with other drugs or toxic chemicals. Melaney Arnold, a public information officer for the Illinois Department of Public Health, told MensHealth.com that nine of the 38 cases in Illinois tested positive for brodifacoum, “a lethal anticoagulant often used as a rodenticide, or rat poison.” Brodifacoum inhibits the body’s ability to clot blood, which may explain the excessive bleeding.

“The long-term effects of long-term synthetic cannabinoid use are unknown.”

What are the health risks of consuming products like K2 and Spice?

The list of possible side effects is endless. According to the CDC, ingesting fake weed can cause side effects ranging from agitation, sleepiness, irritability, confusion, dizziness, incoordination, inability to concentrate, stroke, and seizures, to hallucinations, psychosis, heart attacks, kidney failure, and death.

Is it legal to buy and sell synthetic marijuana?

Yes and no. While some formulas of synthetic marijuana are illegal in various states, manufacturers circumvent the law by tinkering with the chemical makeup of their product. For example, in 2011, the Drug Enforcement Administration (DEA) banned the possession and sale of five common synthetic marijuana chemicals, but many manufacturers simply changed the compounds in their products to make them slightly different.

The products are then sold legally in convenience stores and on the internet, even though many are sold with warning labels saying the product is “not for human consumption.”

What is the treatment for a synthetic marijuana overdose?

As Dr. Patrick Lank, a medical toxicologist who works at Northwestern Memorial Hospital, told the Chicago Tribune, there is no antidote for synthetic marijuana. The only way for doctors to treat an overdose is to help manage the comedown and prescribe extremely high doses of vitamin K for those experiencing bleeding to overcome the bleeding.

Patients must take prescription-strength vitamin K for weeks or months after they overdose. The state health department even sent out a memo to area pharmacies warning that they may see an uptick in prescriptions for the vitamin.

“Although unusual to see such high doses prescribed, due to the long-acting nature of this poisoning, these high doses are required,” the memo read.

Per the Illinois Department of Public Health, if anyone around you ingests these drugs and experiences excessive bleeding, call 911 or have someone take them to an emergency room as soon as possible.