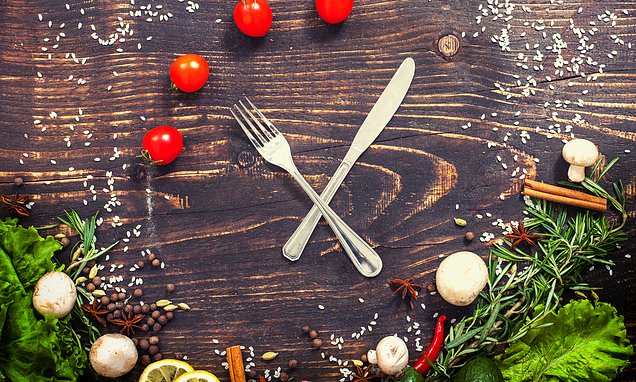 Fasting for 14 hours a day and eating within a 10-hour window may reduce risks of diabetes, a new study suggests.

Intermittent fasting on various eating schedules has become trendy among a wide array of celebrities, including everyone from Kourtney Kardashian to Jack Dorsey, who swear longer stretches without food have made them look and feel better.

Some of take their fasting schedules to an extreme – but a new study from the University of California, San Diego, found that simply eating within a 10-hour window is not only doable, but confers benefits like weight loss and better cholesterol.

In just 12 weeks, the 19 trial participants – most of whom were obese – saw reductions in their BMIs, weights and body fat and many saw improved blood pressure and blood sugar levels.

Before the study, the participants were on a difficult-to-disrupt path toward diabetes, but the researchers say they may now have a chance to dodge the disease. 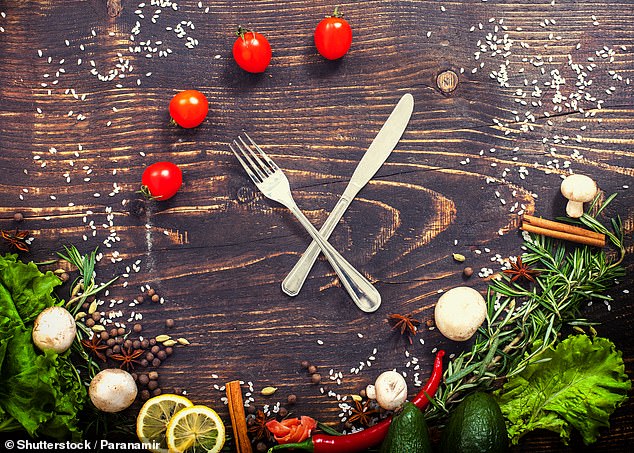 Eating within a 10-hour window each day, then fasting for 14 hours, may help people at risk for diabetes, heart disease and stroke avoid the devastating chronic diseases, lose weight and feel better, a new study suggests (file)

The American Heart Association estimates that 47 million people in the US have metabolic syndrome, a network of symptoms that often precedes diabetes.

About 85 percent of people who have this network of symptoms also have type 2 diabetes.

Those with both conditions are at far greater risk of developing heart disease or suffering strokes as well.

‘When someone has been diagnosed with metabolic syndrome, this is a critical window for intervention,’ explained study co-author Dr Pam Taub, of UC San Diego.

‘Once people become diabetic or are on multiple medications such as insulin, it’s very hard to reverse the disease process.’

Changing these patients’ diets and exercise plans is essential, but difficult.

‘As a preventive cardiologist, I try to work with my patients and encourage them to make lifestyle changes, but it is very hard to get them to make lasting and meaningful changes,’ said Dr Taub.

While many fad diets, like keto, have been proven unsustainable or even, in some cases, harmful, intermittent fasting has by and large held up to scientific testing.

For the latest trial, the UC San Diego team recruited 19 people who already had metabolic syndrome.

Most of the participants were obese and 84 percent of them were on at least one medication for their conditions.

For 12 week, they were prescribed an intermittent fasting schedule.

They were told not to consume anything for 14 hours a day.

But during the remaining 10 hours, they could eat whatever, whenever and however much they pleased.

They all tended to eat breakfast later – about two hours after getting up – and eat dinner earlier than they might have on their normal eating schedules.

After just 12 weeks, the participants’ body fat levels, BMIs and weights all fell by about three percent.

Many, though not all, had lower cholesterol and blood sugar levels at the study’s end, and 70 percent said they slept better.

In fact, the group was so pleased with their progress and how they felt that two-thirds continued to intermittent fast, at least intermittently, for up to a year after the project ended, according to Dr Taub.

‘There has been a lot of discussion about intermittent fasting and what time window people should eat within to get the benefits of this kind of diet,’ says co-corresponding author Satchidananda Panda, a professor at the Salk Institute. “

‘Based on what we’ve observed in mice, a 10-hour time window seems to convey these benefits.

At the same time, it’s not so restrictive that people can’t follow it long-term.’