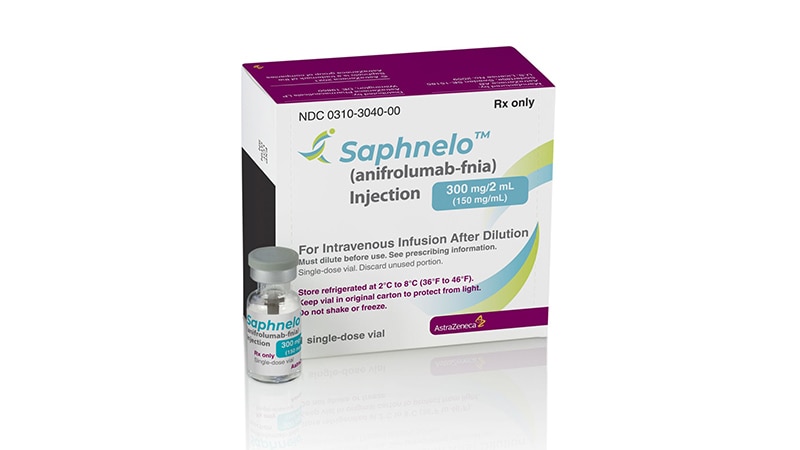 Anifrolumab, an inhibitor of type 1 interferons, received approval from the Food and Drug Administration for the treatment of adults with moderate to severe systemic lupus erythematosus (SLE) who are receiving standard therapy, according to a statement released Aug. 2 from its manufacturer, AstraZeneca.

Anifrolumab will be marketed as Saphnelo. It is a fully human monoclonal antibody against subunit 1 of the type 1 interferon receptor, and its approval represents the only new treatment approved for patients with SLE in a decade. The recommended dosage is 300 mg as an intravenous infusion over a 30-minute period every 4 weeks, according to its prescribing information, and it will be sold in a single-dose vial containing 300 mg/2 mL (150 mg/mL).

Increased type I interferon (IFN) signaling is associated with increased disease activity in patients with SLE, and the option of a type I IFN receptor antagonist may allow physicians to treat patients with fewer corticosteroids, according to the statement.

The approval was based on data from three trials. The TULIP (Treatment of Uncontrolled Lupus via the Interferon Pathway) phase 3 research included two randomized, double-blind, placebo-controlled studies, TULIP-1 and TULIP-2. The TULIP trials each enrolled seropositive patients with moderate to severe active disease despite standard-of-care therapy (SOC), which included oral corticosteroids, antimalarials, and immunosuppressants (methotrexate, azathioprine, or mycophenolate mofetil). All patients met American College of Rheumatology criteria and had an SLE Disease Activity Index (SLEDAI)-2K of 6 or greater, as well as British Isles Lupus Assessment Group (BILAG) index scoring showing one or more organ systems with grade A involvement or two or more with grade B. Both trials required stable SOC therapy throughout the study except for mandatory attempts at oral corticosteroid tapering for patients who were receiving 10 mg/day or more of prednisone or its equivalent at study entry.

TULIP-1 failed to meet its primary endpoint of SLE Responder Index (SRI) at 52 weeks, but investigators determined after the trial that some patients taking anifrolumab had been inappropriately labeled as nonresponders because the trial automatically required any patient who used a restricted drug, including NSAIDs, to be classified as a nonresponder even if they used the medication for something unrelated to SLE. When these rules were amended in a post hoc analysis, differences between the groups treated with anifrolumab and placebo widened in secondary endpoints for oral corticosteroid dose reduction, Cutaneous Lupus Erythematosus Disease Activity Severity Index response, and BILAG-Based Composite Lupus Assessment (BICLA) response.

The TULIP-2 trial included 362 patients who received a fixed dose of 300 mg anifrolumab or a placebo intravenously every 4 weeks for 48 weeks. In this study, anifrolumab patients showed significant improvement in disease activity on the BICLA scale, compared with placebo patients. The BICLA response was 47.8% in patients taking anifrolumab and 31.5% in placebo-treated patients (P = .001).

In the MUSE phase 2 trial, 305 adults with SLE were randomized to a fixed-dose intravenous infusion of 300 mg or 1,000 mg of anifrolumab or a placebo every 4 weeks, plus SOC, for 48 weeks. Patients in this study showed significant improvement on either dose, compared with placebo.

The most common treatment-related adverse events in all three studies were nasopharyngitis, upper respiratory tract infection, bronchitis, infusion-related reactions, herpes zoster, and cough. Infusion-related reactions in the trials were similar in anifrolumab and placebo patients, and included headache, nausea, vomiting, fatigue, and dizziness.

Anifrolumab has not been evaluated in patients with severe active lupus nephritis or severe active central nervous system lupus and is not recommended for these patients, according to the statement.

AstraZeneca said in its statement that anifrolumab is also under regulatory review in Japan and the European Union, and it continues to evaluate anifrolumab in patients with SLE in a long-term extension phase 3 trial and a phase 3 trial assessing subcutaneous delivery. The company said it “is exploring the potential of Saphnelo in a variety of diseases where type I IFN plays a key role, including lupus nephritis, cutaneous lupus erythematosus, and myositis.”