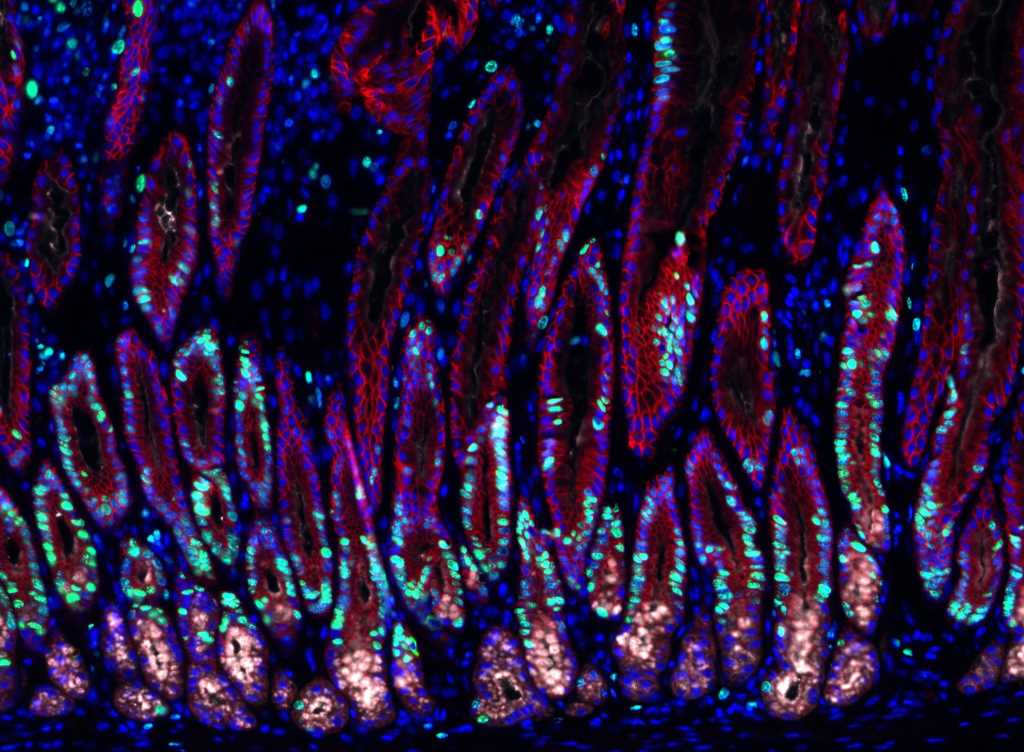 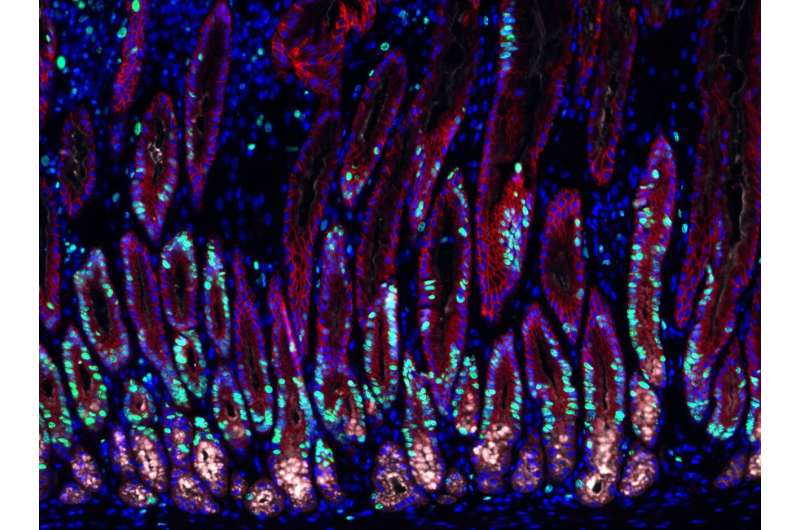 When the bacterium Helicobacter pylori infects the stomach, it causes gastric inflammation and increases the risk of stomach cancer. A team of researchers from Charité—Universitätsmedizin Berlin and the Max Delbrück Center for Molecular Medicine (MDC) have been able to elucidate characteristic changes which occur inside the gastric glands during an H. pylori infection.

The researchers discovered a novel mechanism which, by restricting cell division in healthy stomach tissue, protects the stomach against cancerous changes. An inflammation of the stomach, however, deactivates this mechanism, enabling cells to grow in an uncontrolled manner. The researchers’ findings, which have been published in Nature Communications, may herald a new treatment target in stomach cancer.

Affecting about half the world’s population, Helicobacter pylori is one of the most common causes of chronic bacterial infections in humans. H. pylori can lead to inflammation of the stomach (gastritis) and increase the risk of developing stomach cancer. As the protective lining inside the stomach is constantly exposed to stomach acid, it has to regenerate completely every few weeks, while maintaining both its structure and composition despite the high cellular turnover.

“Until now, researchers had assumed that a Helicobacter infection causes direct damage to the gastric gland cells in the stomach lining and that gastric pathology upon infection is simply the result of this process,” explains the study’s last author, Prof. Dr. Michael Sigal. He continues: “In fact, our team has now discovered that the infection disrupts complex interactions between different cell types and signals which are responsible for tissue stability.” Prof. Sigal is Professor for Translational Gastrointestinal Oncology and leads an Independent Research Group at Charité’s Department of Hepatology and Gastroenterology and the Berlin Institute for Medical Systems Biology (BIMSB), which forms part of the MDC.

Led by Prof. Sigal and working alongside colleagues from the Max Planck Institute for Infection Biology, the team of researchers used complex mouse models to observe changes occurring inside the gastric glands. Using state-of-the art imaging and single-cell sequencing technologies, the researchers were able to visualize and isolate specific gastric gland cells, which they then examined in detail. In order to minimize the need for animal models, they also developed special organ-like tissue microstructures known as organoids. The researchers used these microscopic stomachs to recreate many of the gastric glands’ characteristics. This strategy enabled them to study the effects of various signals on stem cells which are found inside the gastric glands (and which are capable of differentiating into many different cell types).

“We discovered that ‘stromal cells’—a type of cell surrounding the gastric glands—are not only responsible for mechanical stability of the glands, as previously thought. Instead, they produce various signaling molecules which significantly influence the behavior of the gland cells,” explains Prof. Sigal. These substances include “bone morphogenetic proteins” (BMPs), which play an important role in tissue development.

The researchers were able to show that stromal cells surrounding the gland base continually inhibit the BMP signaling pathway, thereby stimulating the proliferation of nearby stem cells. In contrast, stromal cells at the gland surface were found to activate the signaling pathway, thereby suppressing cell proliferation. Together, this forms a signaling gradient that guides stem cell turnover and differentiation, and serves as the basis for the gland’s structural stability. Helicobacter infection causes the release of pro-inflammatory substances such as interferon-gamma (IFN-γ). This inflammatory cytokine interferes with the BMP signaling axis, resulting in less BMP signaling activity and stimulating gland stem cell proliferation. This results in hyperplasia, a precancerous lesion characterized by tissue enlargement.

“Our findings show that an infection-driven inflammatory response has far more pronounced effects than previously thought. In addition to their well-characterized antimicrobial effects, pro-inflammatory substances such as IFN-γ affect both cell proliferation and tissue stem cell behavior and therefore have a direct impact on tissue homeostasis. In the case of tissue damage, increased cell proliferation can be useful, as it promotes rapid healing. In the case of chronic inflammation associated with a Helicobacter infection, however, it could facilitate the development of precancerous lesions,” summarizes Prof. Sigal.