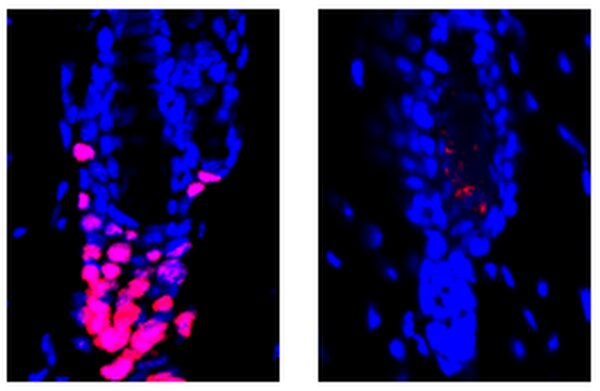 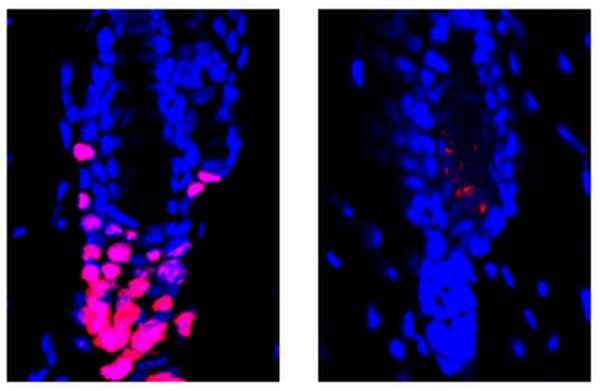 Salk scientists have uncovered an unexpected molecular target of a common treatment for alopecia, a condition in which a person’s immune system attacks their own hair follicles, causing hair loss. The findings, published in Nature Immunology on June 23, 2022, describe how immune cells called regulatory T cells interact with skin cells using a hormone as a messenger to generate new hair follicles and hair growth.

The scientists didn’t begin by studying hair loss. They were interested in researching the roles of regulatory T cells and glucocorticoid hormones in autoimmune diseases. (Glucocorticoid hormones are cholesterol-derived steroid hormones produced by the adrenal gland and other tissues.) They first investigated how these immune components functioned in multiple sclerosis, Crohn’s disease and asthma.

“After two weeks, we saw a noticeable difference between the mice—the normal mice grew back their hair, but the mice without glucocorticoid receptors barely could,” says first author Zhi Liu, a postdoctoral fellow in the Zheng lab. “It was very striking, and it showed us the right direction for moving forward.”

The findings suggested that some sort of communication must be occurring between regulatory T cells and hair follicle stem cells to allow for hair regeneration.

However, regulatory T cells don’t normally produce TGF-beta3, as they did here. When the scientists scanned databases, they found that this phenomenon occurs in injured muscle and heart tissue, similar to how hair removal simulated a skin tissue injury in this study.

“In acute cases of alopecia, immune cells attack the skin tissue, causing hair loss. The usual remedy is to use glucocorticoids to inhibit the immune reaction in the skin, so they don’t keep attacking the hair follicles,” says Zheng. “Applying glucocorticoids has the double benefit of triggering the regulatory T cells in the skin to produce TGF-beta3, stimulating the activation of the hair follicle stem cells.”