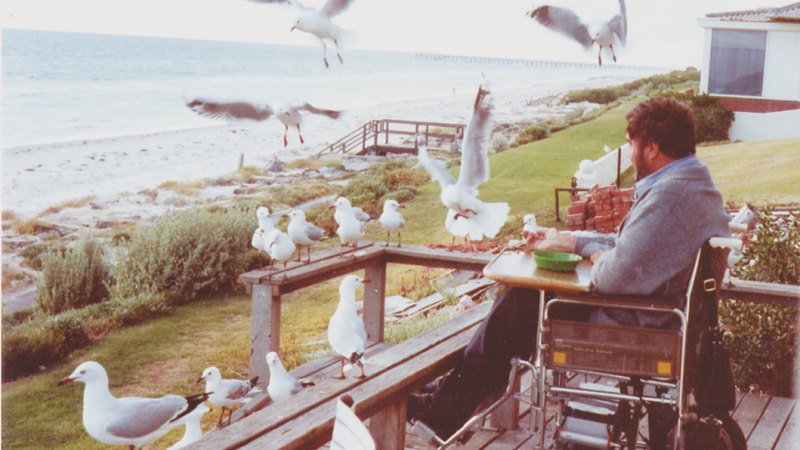 It was 1957 when my father, Richard Dutton Llewellyn, a 20-year-old sailor, was struck down by a debilitating fever. His ship's captain put him into a tiny boat and ordered two of my father's shipmates to row him to shore, a mile or so from where they were anchored off the coast of Adelaide. In the darkened spare room of his aunt Molly's home, in the quiet suburb of Fullarton, he convalesced.

My great aunt Molly stood 4 foot 10, but what she lacked in height she made up for with a quietly understated grit. Molly had been a Red Cross nurse in World War II and, when my father fell ill, it was her diligent and intelligent care that brought him out of his delirium quicker than anyone expected. 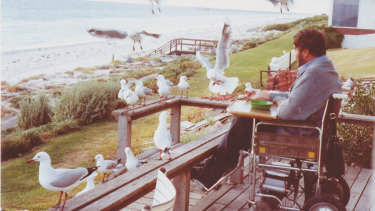 The author’s father at his Adelaide
home in the late ’70s.Credit:Courtesy of Caro Llewellyn

One day, shortly after his temperature returned to normal, believing himself to be on the way to a full recovery, my father told his aunt he was leaving the house to run a short errand at the post office. When she warned him not to overexert himself, he said, "I'll only be gone an hour." The following morning he tried to reach for the glass of water on his night stand. But nothing moved. Not his arms; not his legs. He couldn't lift his head from the pillow.

"I can't move," he called out to aunt Molly, who ran to his bedside. Though he later claimed that he wasn't afraid, I knew Molly, and she wouldn't have run unless she'd heard panic in his voice.

When Molly hooked her arms under the crook of his armpits and tried to hoist him into a sitting position, he was dead weight. Upright, he slumped like a rag doll and gasped for air. Whatever was happening was affecting his lungs, so Molly knew it was serious. She called an ambulance, which took him, sirens blaring, to the infectious diseases hospital. By the time the orderlies hauled him onto a hospital bed, he was hardly breathing at all.

Incredibly, the key to the storeroom containing the hospital's mobile equipment, including respirators and iron lungs, was not to be found on its hook in the nurses' station. After frantic searching, a phone call was made to the matron, who'd overseen the night shift and had clocked out a few hours earlier.

The matron had lapsed in her own protocols and, after fetching something or other from the storeroom, put the key into her pocket and forgot about it until her home phone rang. Despite the emergency, she refused to return the key until her next shift, which was scheduled to begin later that day.

I always questioned my father about that part of the story. It's unimaginable that someone could be so monstrous, that a single person could have sealed my father's fate through such a wilful neglect of duty, but he never budged. The matron had the key. The matron refused to bring it back.

As a consequence, my father's life lay in the hands of a roster of nurses, doing whatever they could without the one thing they needed to keep him alive, a ventilator. Each time a lack of oxygen caused his eyes to roll back in his head, the nurses slapped his face, prised open his eyelids and shone a bright torch into his marine-blue eyes, pleading "Stay with us" over and over.

My father was almost dead. By now he needed more than a ventilator to keep him breathing, he needed an iron lung. When the storeroom key was finally returned, the door was unlocked and one of the long rocketlike machines was hurriedly pushed along corridors, wobbling and clattering on its little wheels, until it was parked beside my father's hospital bed. Four nurses used the bedsheet to hoist him inside. Sealing him in, they flicked the switch and listened as the machine's bellows slowly inflated and began breathing for him.

By the time the doctor arrived for his rounds the following morning, my father had been moved into a quarantined ward. There, his parents had spent a sleepless night by his side after the long drive into the city from their farm in Strathalbyn.

Once he read my father's chart and concluded a short examination, the doctor delivered his cruel verdict. Polio had rendered useless 95 per cent of the muscles in my father's body and collapsed his lungs. The chances of him surviving more than a few days were next to nothing. "Don't get your hopes up," he told my grandparents, and left the room.

I have always had a very particular image of my father lying in this metal contraption with only his head sticking out, as though he were looking up at the blade of a suspended guillotine, waiting for the drop.

My grandparents were practical people. At home, they slept in single beds with two bedside tables between them, their blankets stretched tight with perfect hospital corners, each of their flat pillows neatly propped up against the narrow headboard. My grandparents' room was still, as if nothing ever happened in it. I never saw a touch between them, but perhaps in this moment my grandfather, standing beside my seated grandmother, might have placed his hand on her shoulder and given it a single pat.

A year later, my father was still alive. Locked inside the tin can that breathed for him 24 hours a day, he longed for a lot of things, but mostly to be back at sea. He even missed the rigour and fastidious routine of ship-bound life, where he'd once been ordered to clean a deck with a toothbrush.

With nothing to do but stare at the scuffed walls, the chipped paint and the cracked ceiling, he could not help but obsess over the ward's shabby state. Worst were the brass fittings – the door handles, light switches and plaques – blackened by use and time. "Filthy," he thought, and set his mind to scheming how to fix it.

It didn't matter that my father's new posting was aboard a single occupancy "vessel", he'd still be its commander. With the right co-conspirator, my father could bend just about anything to his will.

This is when he met a tall, goodlooking trainee nurse from the country named Jill. She was in the final months of her apprenticeship, on one of the last rotations in her nursing education, when she was assigned to the infectious diseases ward. He found her to be a willing participant in his ambitions and within days of her arrival she was cleaning the dirty fixtures with a soft cloth while he issued exacting instructions over the whooshing sound of the iron lung. As she polished and scrubbed, and later as she administered his care, my mother and father told each other their life stories.

Everyone takes something different from their family's narrative. This was what I took: my father, still game and commanding despite paralysis, charmed a nurse from inside his iron lung. She was equally up for a challenge, determined to protect the weak, to preserve the dignity of this vital young man, so she took up his cause and made it her business to follow his instructions. Why not? They fell in love. Three years later they were married.

Eventually, my father got out of the iron lung and into a wheelchair. They had my brother, Hugh. Then I was born. They opened a successful art gallery. My mother appeared in Women's Weekly as Mother of the Year. 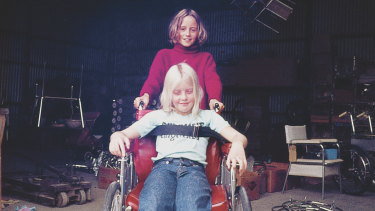 As a child playing in her father’s wheelchair with brother Hugh.Credit:Courtesy of Caro Llewellyn

The message I took most to heart was this: no matter how impossible it seems, how long the odds, words and a good story can help you overcome every single thing stacked against you. A close second: do not dwell on your misfortunes, do not complain, do not feel sorry for yourself. No matter what befalls you, carry on like absolutely nothing is wrong.

At the very least, there'll be a good story to tell at the end of it. Care for the weak wherever you find them, build an impenetrable wall around your own weakness so no one sees it. Grab each day as if it were your last.

This article appears in Sunday Life magazine within the Sun-Herald and the Sunday Age on sale March 2.