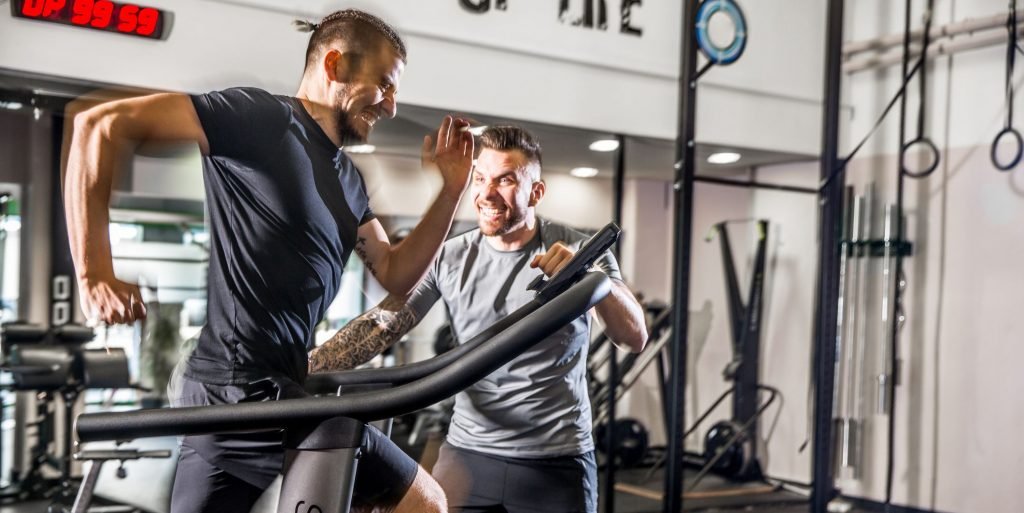 Once the colder months arrive, guys in colder climes are subjected to the confines of the gym. If we had to bet, a lot of them have reservations about taking otherwise enjoyable outdoor workouts indoors—especially when it comes to running. Running indoors means getting on the treadmill, one of the more polarizing pieces of equipment in the gym.

We’ve heard all of your treadmill quips before. People complain that it’s boring. Nicknames like the “dreadmill.” But taking your runs inside to the machines can have speed benefits that translate back to your outdoor sessions come spring, says David Siik, creative director at Precision Run by Equinox, which is set to open its first stand-alone, treadmill-only studio in Manhattan this spring.

“The treadmill is a magnificent machine,” he says. “Unlike almost any other piece of cardio equipment, it also keeps you extremely honest. If you type in 9.0 mph, you are going to have to go 9.0 mph until you stop the machine, or go flying off the back—but you won’t. That honesty’s so powerful.”

As long as you’re not hopping onto something that’s been in your basement collecting dust since the late 1980s, the treadmill also happens to be an excellent interactive computer, capable of data tracking and metric calculating with precision. A giant computer where you have the opportunity to control absolutely everything around you.

“When you’re outside, you’re worried about the terrain, other people, the weather, and changes in the environment around you,” says Pam Geisel, exercise physiologist and manager of performance at the Hospital for Special Surgery in New York City. “Inside, none of that’s a factor. Inside, you can focus on your form, and then bring those lessons back into the real world where sooner or later, they’ll become natural.”

In other words, abundant speed gains are awaiting you, even when you’re gym-bound for months. Ready to put in some work indoors? The experts breakdown four strategies to help pick up the pace for good indoors this winter.

Use the Treadmill as Part of a HIIT Protocol

Using the treadmill as part of your HIIT workouts is a great way to stave off boredom. Granted, short bursts of hard work on the treadmill can look drastically different from one day to the next. So, maybe one morning you’re crushing 5 x 1200 meters at 10K pace, and the next you’re trying 10 x 30-second all-out sprints at a 12.0 incline. “Varying your speed and incline on the treadmill is a guaranteed way to become a better runner,” says Geisel. “You’ll also be able to watch your progress closely as the workouts likely become easier.”

Siik tells his clients that they should be hitting the treadmill at least twice a week in the winter, which helps to avoid injury and maintain a baseline of fitness that can often be lost during the chillier months. “Plus, you’ll come out with all cylinders firing come spring, and you’ll be beach ready before anyone else,” he says.

Run With a Friend

You join a fantasy football league with friends, which means you’re more likely to watch the games come the weekend, right? Same thing goes for exercise. If you’ve got a buddy that’s meeting you for incline day or bouncing their treadmill workouts off of you for advice, that’s likely to keep you more accountable. One University of Aberdeen study even revealed that working out with a partner can make you exercise more often.

Make Time for Recovery After Runs

We all know how important it is to get in some shuteye, yet more than 30 percent of us don’t get in the seven hours of snoozing we need nightly to stay healthy, according to the CDC. Sleep is critical for recovery post-effort, as research shows that non-REM sleep (that’s the phases where you’re not dreaming) increases protein synthesis and the mobilization of free fatty acids, which helps to repair the muscle tissue you broke down during your sweat session and give you a needed energy boost.

“Sleep’s always going to be important, but especially if you’re going to work on your running game,” says Siik. “Just going to bed 30 minutes earlier than you usually do can make a difference.”

And of course, there’s more to recovery than sleep. Reaching for the right post-workout foods can help your body rebuild. Foam rolling and other self-myofascial release tactics can enhance flexibility, reduce tightness, and make muscles more pliable for whatever effort is next on your to-do list.

Ready to give it a try? Start out with these sprint splits.