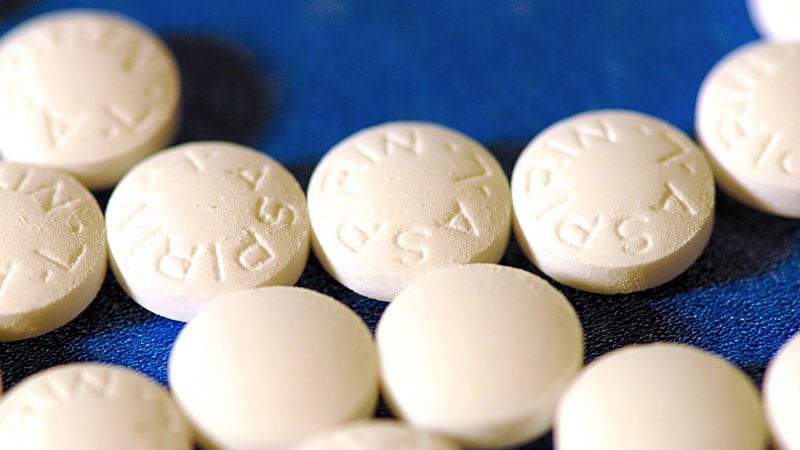 Millions of US adults aged 70 years and over previously advised to take aspirin for primary prevention would not now have it recommended for routine continued use — in particular those with diabetes at low risk of cardiovascular disease (CVD) — say the authors of a new study investigating trends in use of the medication.

The cross-sectional study looked at aspirin use for both primary and secondary prevention of CVD in older adults (≥ 60 years), with primary prevention being the key concern in this age group for whom harms, mainly bleeding, might outweigh benefits.

In fact, older people with diabetes were found to be twice as likely to use aspirin for primary prevention as those without diabetes (odds ratio [OR], 1.98).

The authors, led by Elizabeth Liu, Johns Hopkins University School of Medicine, Baltimore, Maryland, suggest “that older adults may have potential overuse of aspirin therapy if it is not actively discontinued, especially among those with diabetes,” in their article published online June 21 in JAMA Network Open.

Indeed, “more than 20% of individuals with low cardiovascular risk use daily aspirin,” he noted. “And this increased to over 50% in those people over 80 years. This rate of aspirin use is poorly justified by current evidence and would seem likely to be causing more harm than good.”

Guidelines and Data Updated in 2018

Revised guidelines from the American Diabetes Association (ADA) and American College of Cardiology (ACC) in 2021 recommend consideration of aspirin use for primary prevention in individuals with diabetes who have an increased CVD risk, without increased risk of bleeding, but generally not in those aged 70 years and older.

Studies published in 2018 were a turning point. Evidence from three large trials (ASCEND, ASPREE, and ARRIVE) led to a change in guidelines by the ADA and ACC.

Both organizations discourage the use of aspirin for primary prevention in people over 70 years with or without diabetes.

The findings from the new cross-sectional study show the potential to reduce aspirin use in older adults. The new study is based on data on preventive aspirin use in 7103 adults over aged 60 from the National Health and Nutrition Examination Survey (NHANES) in 2011-2018,

Overall, aspirin use — for primary or secondary prevention — in older US adults was 46.7%. For those with diabetes it was 61.7%, compared to 42.2% in those without diabetes.

Among people with diabetes, the likelihood of aspirin use in older vs younger age categories (reference, 60-69 years) did not differ in multivariable logistic models adjusting for race, sex, education, CVD risk category, and body mass index.

“Preventive aspirin use was higher among older adults with diabetes than in those without diabetes,” the researchers say.

Extrapolating from their analysis, they suggest that continued aspirin use would now not be recommended in the 9.9 million older US adults who have been taking aspirin for primary prevention, particularly those with diabetes.

Going forward, it will be important to examine if the changes to guidelines made in 2018 will have any effect on such prescribing, they add.

“Ultimately, future studies should examine the influence of updating guidelines on clinician behaviors and the association of changing trends in preventive aspirin use with the development of CVD in older adults,” they write.

Talk to Patients About Aspirin Use, Reassess the Risks

Senior author Rita Kalyani, MD, also of Johns Hopkins, emphasized the importance of initiating a conversation about the benefits and risks of aspirin use in older patients.

“It’s important that for patients taking aspirin, as well as clinicians treating those over 70 years, with and without diabetes, to discuss if they’re taking aspirin for primary prevention,” she told Medscape Medical News.

“If they are, then on an individual basis, they need to together discuss the potential benefits and harms involved in the context of recently updated guidelines and studies,” she added.

Pace noted that most individuals older than 70 years are not newly initiating aspirin, but continuing therapy started at a younger age.

“Stopping a therapy on which an individual appears to be doing well can be a much harder decision for both patient and clinician than not starting the treatment in the first place,” said Pace.

“Only through careful, ongoing assessments can physicians make sure they are following what many consider to be the most important ethical tenet of clinical care — primum non nocere — first, do no harm.”

The authors, including Liu and Kalyani, as well as Pace, have reported no relevant financial relationships.