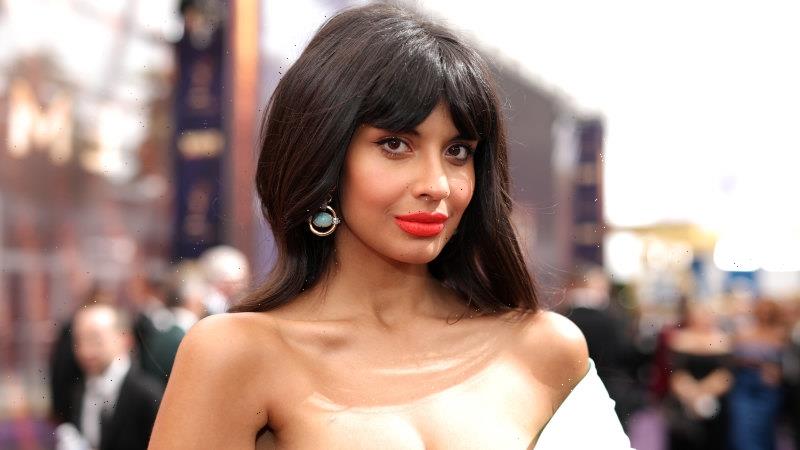 To all the parents out there who lie in bed at night wondering just how badly they’re screwing up their kids, actor Jameela Jamil has a reassuring message. We’re brave, she thinks, to even be fighting to get it right.

“I personally just feel very anxious about the responsibility of fighting this many toxic influences,” says The Good Place star, about the prospect of raising children amid the onslaught of social media messages telling children they aren’t enough. “Like, I don’t know how any parent is being able to do it.” 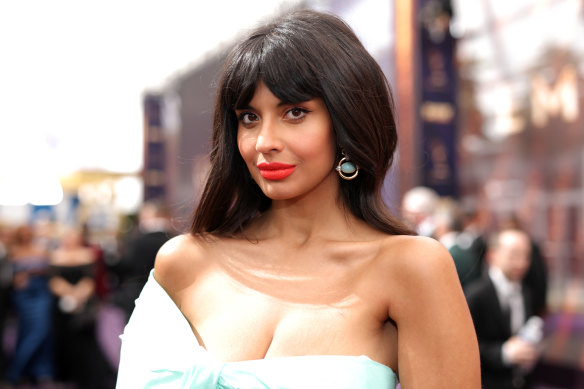 “It’s just alarming that my friends’ kids around the age of four, five and six are already starting to say that they’re ugly and fat,” says The Good Place actor Jameela Jamil.Credit:Getty

It’s why, in part, Jamil is scared to have kids, she says.

“It feels that kids are being hunted by this stuff now, that’s the only thing that makes me super anxious and it would make me not at all excited to take that on,” says the actor, a bolshie body positivity activist behind the viral “I Weigh” social media movement, which encourages the public to post un-airbrushed selfies and express what they’re grateful for. “It really is just extraordinarily impressive, raising a child in this world.”

Her view has been informed, in part, by her own fraught experience as a child growing up in London to a Pakistani father and a Pakistani-British mother. 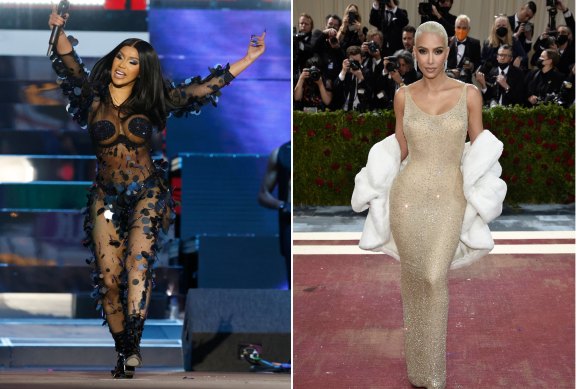 “They panicked and expressed shame, and immediately put me on a crash diet,” Jamil once wrote of her parents Ali and Shireen. This was in 1998 when Jamil, then 12, had returned home from school and confided in her parents that she had been deemed the heaviest girl in her class and ridiculed for it. (Her English teacher weighed all the girls in class, as a data-collection exercise, and wrote down all the girls’ weights on the board, from heaviest to lightest, with Jamil’s name at the top.)

The combined damage – compounded by being bullied for being “fat deaf and Indian” and raised on TV shows in which the only actors who looked like her played the “creep or the loser” – lasted for decades.

“I’d say similarly to a lot of people, my family felt a lot of pressure themselves to conform to thinness, you know, so, I don’t think that came from a hateful place,” says Jamil, 36, over the phone from her home in Los Angeles. “But I think they themselves were very, very conscious of size and weight and of each other and of us. I didn’t know until my 30s” – she lets out a nervous chuckle – “that life doesn’t have to be like that.

“It was a different time. We can’t hold them [her parents] to our standards. We didn’t have the wealth of information [that we have now] about disordered eating.”

It’s why, in part, Jamil agreed to take part in Embrace: Kids, a new Australian documentary about the crisis among children who struggle to love their bodies, and who they are.

The film, aimed at children aged eight to 12 and their parents, is stuffed with inspirational interviews with kids who have overcome cruel judgment as a result of, among other factors, having autism, disabilities, diverse gender expressions, or bodies that don’t resemble the influencers they see on Tik Tok. Jamil and Australian comedian Celeste Barber, who appear in the film, share their own experiences with how others made them feel less-than, and offer words of encouragement.

But the stories some of the children tell in the film often reveal shards of pain, as with Sarah, a 14-year-old with a Raphaelite face who is in near tears when she recalls the moment she saw a “before and after” weight-loss feature on social media and realised that her body looked “exactly” like the much-derided “before” body shape. 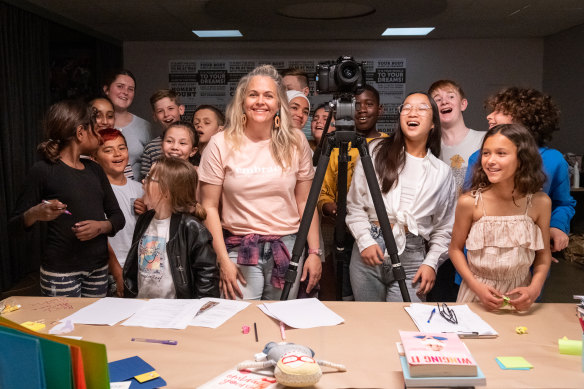 “We need to stop talking negatively about our bodies in front of our kids,” says Taryn Brumfitt, centre, with the stars of her new documentary, Embrace: Kids.

And all too often it’s parents who are wreaking this type of havoc on their children’s hearts, say psychologists.

“A parent might be really worried that their child’s going to get bullied because they’re overweight, or they’re going to fail the maths test, so they go, ‘Come on, you’ve got to do this’, or, ‘You can’t eat this, we don’t want you being fat’,” says Professor Caroline Hunt, a clinical psychologist and president of The Australian Clinical Psychology Association. “I think they think they’re being helpful.”

But the impact of parental criticism can be heartbreaking and long-lasting.

“If a parent criticises a child’s weight or the way they dress, or look, or the music they listen to or the people they hang out with… that’s communicating to the child, ‘I don’t approve of you, I don’t like your choices, I don’t potentially like you’,” says Melbourne clinical psychologist Ben Callegari, who has helped numerous clients deal with this situation. “[They feel] there’s something wrong with you, right? And these may not be the intention of the parent, but these messages get internalised.”

The fallout from parents who don’t accept their children’s gender identity can be particularly devastating.

“It’s a fundamental rejection of who the person is,” says Callegari, who has helped clients through this experience. “And therefore creates a really deep, deep sense of loneliness. That [feeling of] ‘I am all alone in the world, I don’t have a safety net’. And that is incredibly scary.

“As a basic human rule, mammalian rule, we want our parents to love us. It’s not rocket science.”

Jamil knows how hard it can be to heal from a culture that punishes difference and tries to coerce people into conformity. She may seem fearless when she’s going after anyone who, as she puts it in the film, are “doing anything to hurt the emotional and mental health of young people in the world”. (“GOD I hope all these celebrities all shit their pants in public, the way the poor women who buy this nonsense upon their recommendation do,” Jamil once tweeted, referring to Cardi B who had recently peddled a tea that the rapper said helped her lose weight after giving birth to her daughter.)

It took the actor, she says, two decades, Eye Movement Desensitisation and Reprocessing therapy, a form of psychotherapy that helps people heal from longstanding trauma and anxiety, and the launch of her own body positivity movement, among other things, to stop loathing her own body.

“All these things I was saying to other women and people around the world,” – Jamil frequently gives speeches and hosts a podcast focusing on body positivity and women’s accomplishments –“I was saying them so many times, that they finally stated to go in [to me].”

So, how can parents who are struggling to accept their children start to do better?

“Parents need to see that they themselves are more than their beauty or their size,” says Tan-Kristanto, a clinical psychologist and director of The Australian Clinical Psychology Association. “That’s one of the most powerful things that a parent can do, to figure that out for themselves. Then it comes across so easily to be able to model that to their kids.”

And remember, says Ben Callegari, that a parent’s job is not to shape their child in their own image, but to help them work out who they are. “The way that parents do this is to encourage their children, listen to their preferences, and follow their own passions,” he says, noting that this is the way to help a child gain a good sense of self. “[That way] you’re teaching your child, ’You’re the best person to decide what you like, to work out what you feel is good. Not me, not your teacher, not your friends. You.”

And try not to feel shame if you’ve modelled the wrong things for your child in the past.

“The ‘shoulds’ and the shame around things that we have or haven’t done, it just takes up too much energy,” says Embrace Kids director Taryn Brumfitt, who recalls referring to foods as “good” or “bad” around her children when they were young, and she hated her body so much she considered getting a tummy tuck and a breast augmentation.

“We can start afresh at any time. That’s just what I did,” says Brumfitt, whose kids are now 16, 14, 12 and 10, and whose 2016 documentary, Embrace, went viral after she documented her journey from being an unhappy bodybuilder to an average-sized women in love with her jiggles. “I’m really grateful that my kids were really young when I hated my body. [Now] my whole life is not doing this stuff.”

Embrace: Kids is out in cinemas on Thursday.