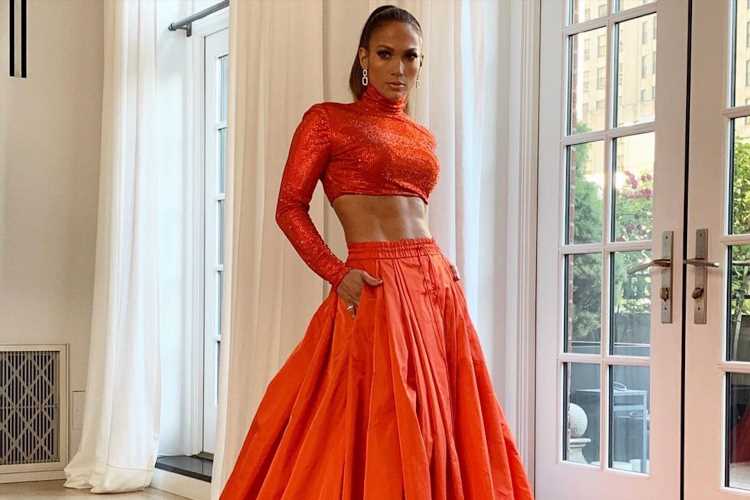 Dear diary: It’s been more than two weeks since I last got a glimpse of Jennifer Lopez’s abs, and frankly, that is two weeks too long.

Luckily, J.Lo must’ve sensed my withdrawal (or just missed taking pics of her straight-fire midsection), because she delivered on Instagram Wednesday with not only a pic of her abs, but also a shot of her toned back.

J.Lo shared the pictures on her Instagram stories, showing off her super-toned bod during a workout (naturally). In the photos, she’s wearing a cute, strappy sports bra and matching white leggings with a flower print while strength training—specifically doing high cable curls and other arm exercises with weights.

According to her photos, J.Lo was doing some “show day prep,” and focusing on “biceps, back, and booty” (get it, girl). Honestly, if all of this is before her show later in the day, I’m even more impressed.

TBH, though, tough workouts are basically NBD for J.Lo—the star definitely doesn’t skimp on her fitness routine. In 2015, she told Us Weekly that she “very rarely skips a workout.”

Of course, it’s also worth pointing out that J.Lo’s “genetically blessed,” according to one of her trainers, David Kirsch. In a 2017 interview with People, Kirsch said J.Lo has a ton of energy, both mental and physical, that help fuel her drive at the gym. “She’s very connected to her body, and she’s got crazy discipline,” he added.

Another motivating factor: J.Lo’s fiancé, Alex Rodriguez (a.k.a., A-Rod), who often joins her for sweat sessions. They are both obsessed with TruFusion, for example, which is a fitness studio with a variety of classes including yoga and bootcamp in rooms heated to up to 120 degrees.

All I’ve got to say is: damn, girl. If A-Rod is busy sometime and you need someone else to work out with, HMU.

Watch below to see exactly what Jennifer Lopez eats in a day.

This article originally appeared on Women’s Health US