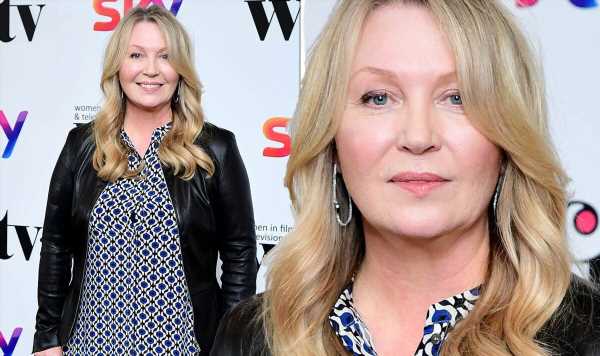 As she makes her BBC comeback after four years in order to anchor coverage of the Platinum Jubilee, Young, 53, reminisced about her time hosting BBC Radio 4’s Desert Island Discs which came to an end shortly after she began to suffer from fibromyalgia in 2017. In a recent interview the star also revealed that she has rheumatoid arthritis. Speaking openly and honestly about her ordeal, Young confessed that her conditions have meant everyday tasks like driving and cooking have become increasingly difficult, leaving her dependent on a “complex cocktail” of medication.

“I had extreme joint pain,” she said, explaining how her diagnosis began. “I’d wake up and I’d feel like I’d got glass in my joints.

“In the morning, I felt like somebody had come in with a baseball bat and given me a ‘doing’, as we say in Glasgow, in the night.”

Alongside extreme stiffness and pain in her joints, Young was experiencing extreme tiredness, something she had never experienced before.

She continued to say: “I couldn’t walk up the stairs without stopping in the middle. It’s not like tiredness if you’ve had a big walk or done some gardening.

“It’s like somebody had drugged me, like you’d taken a sleeping tablet at the wrong time in the day and you were completely losing it.”

Desperately trying to “soldier on”, and hide her condition from her children and step-children, the former Crimewatch presenter admitted that she was “shovelling down painkillers” but remained too weak to lift up a water bottle.

She added: “The kids laughed but I could feel tears in my eyes. I felt pathetic that I couldn’t even lift a bottle of water. I just felt totally physically incapable.”

With her day-to-day-life becoming more of a struggle, things were not helped by Young being prescribed medication for things that “weren’t there”. The combination of the wrong medics, the wrong medication and her fibromyalgia “muddying the waters” of a simple treatment meant the star had no choice but to step away from the career she loved.

Unlike osteoarthritis, rheumatoid arthritis is an autoimmune disease. This means that the immune system (which usually fights infection) attacks the cells that line the joints by mistake, making the joints swollen, stiff and painful.

Over time this can go on to damage the cartilage and nearby bone meaning the individual loses the ability to use their limbs properly. Currently it remains unknown what triggers rheumatoid arthritis, but those with a family history can be more at risk.

For some individuals, like Young, having a chronic condition like rheumatoid arthritis can act as a trigger for fibromyalgia, also called fibromyalgia syndrome (FMS), a long-term condition that causes pain all over the body.

This condition is thought to be related to abnormal levels of certain chemicals in the brain, which in turn change the way the central nervous system processes pain messages. This means that individuals with fibromyalgia have an increased sensitivity to pain, even if there is little to no threat.

Young explains that for individuals with the condition, something as simple as touching the sides of a sofa with their forearm “would bring tears to your eyes”.

She added: “You feel pain in a way that is just so heightened. Your whole physical sense is distorted — your world starts to move in front of you in odd ways. They talk about ‘fibro fog’ a woolliness between you and reality, and I think that is because you’re dealing with pain all the time.”

Recalling the “sobering moment” when she was first diagnosed with fibromyalgia, Young continued to explain what her physician had told her about the outlook of the condition. They told Young: “There’s light at the end of the tunnel, but it’s a long tunnel. I can’t cure you, but I can treat you. It’s a managed condition.”

With the reality that her treatment was going to take a significant amount of time and dedication, Young felt that she couldn’t go “part time” at work. “It was hard to walk away from it but it was clearly the only option,” she shared.

The NHS explains that treatment for fibromyalgia tends to involve a combination of the following:

For Young, she started to see a doctor multiple times a week and has been given treatment that partly alters the chemistry in her brain to try and curb debilitating symptoms. “I was in an ideal position to try to fix a thing that had floored me,” she added, speaking about how fortunate she knows she is to have private healthcare.

However, even with treatment, Young admitted that she felt depressed during her lowest moments trying to battle her chronic pain disorder. But four years on, she is delighted to share that she is mostly off of her medication and has become slightly obsessed with looking after her health.

As well as nurturing the good bacteria in her gut, the star likes to partake in therapeutic yoga and medication, which have both helped her to reduce her reliance on medication. Reflecting on how far she has come, Young added: “It’s almost like a bad dream.”