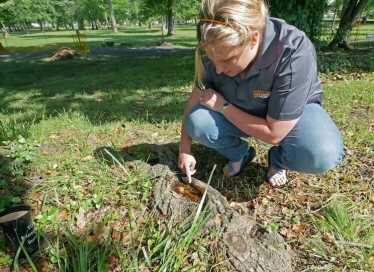 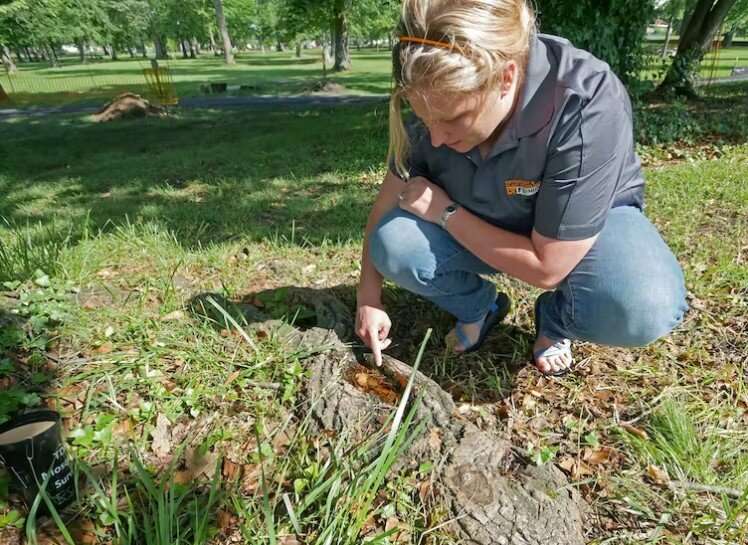 For the Laudick family of Greensburg, Indiana, life forever changed on Aug. 5, 2013. That was the day four-year-old Leah Laudick told her mom, Shelly, that she had a bad headache.

Two days later, Leah was hospitalized nearby with worsening headaches and a slightly elevated white blood cell count. She slept for most of the day and by Aug. 9 was largely unresponsive.

That day, during her transfer to Peyton Manning Children’s Hospital in Indianapolis, Leah had her first of several seizures. Doctors were unable to identify her illness—tests for diseases like meningitis, Rocky Mountain spotted fever and herpes simplex all came back negative.

One day later, on Aug. 10, Leah’s brain activity stopped. That evening she passed away in the arms of her grieving parents.

A few months later, the Laudicks learned from the Centers for Disease Control and Prevention that an illness called La Crosse disease, contracted from the bite of a mosquito, had caused Leah’s death.

I am an entomologist at the University of Tennessee who studies how La Crosse disease spreads in the environment. I met the Laudicks—they have given me permission to tell their story—when Leah’s father, Andy, emailed me asking how he could help with my work. Such emails from parents of La Crosse-infected children are why I continue to study the virus.

Together with other researchers at the University of Tennessee and Western Carolina University, I’m working to provide people and communities with effective solutions to preventing this illness. Through my research and community engagement activities, I am helping to increase awareness of what La Crosse virus is and how people catch it—and can avoid catching it.

What is La Crosse disease?

La Crosse disease is the nation’s second-most prevalent mosquito-borne virus. According to the CDC, West Nile virus makes up more than 90% of annual viral infections from mosquito or tick bites, with La Crosse the next-most prevalent at about 2% of mosquito or tickborne viral infections a year—or 50 to 150 cases a year. Both children and adults can be infected with La Crosse virus.

La Crosse was first identified in the U.S. in 1960, and historically, most cases have occurred in Upper Midwest and Mid-Atlantic states. Leah’s case was the only one reported in Indiana in 2013.

The majority now occur in the southern Appalachia region, which stretches from northern Alabama and Georgia, across eastern Tennessee and western North Carolina, and north to parts of Kentucky, Virginia and West Virginia. We still do not know why this is the case, but there are many hypotheses centered around climate, land use and invasive mosquito species.

How do people catch La Crosse?

La Crosse virus is carried and transmitted primarily by the eastern tree-hole mosquito, Aedes triseriatus, a native species found throughout most of the Eastern U.S. This mosquito’s preferred habitat is places with obvious tree holes for female mosquitoes to deposit their eggs, such as hardwood forests.

However, the virus may also be transmitted—although not as well—by two exotic and invasive mosquito species: the tiger mosquito, Aedes albopictus, and the bush mosquito, Aedes japonicus.

Tiger and bush mosquitoes are spreading throughout the U.S. in response to changes in landscape and climate, and also by hitchhiking inside water-filled containers. Our team has found them together in the same habitats as eastern tree-hole mosquitoes, in places with hardwood trees like parks, cemeteries and residential backyards. Our team has also found these mosquitoes in close proximity to confirmed La Crosse cases.

All three mosquito species develop in the same water sources and feed on mammals, including humans. Some scientists speculate that these factors have been key to the distribution of La Crosse in the Appalachian region, although there is still a lot to learn about these mosquito species and their role in spreading the virus.

La Crosse disease is easy to misdiagnose, in part because its symptoms can be easily confused with those of other illnesses, such as the flu. Moreover, the only way to test for La Crosse involves sending samples of blood and cerebrospinal fluid to the CDC.

However, La Crosse infections tend to cluster in local communities from year to year. For example, of the 115 cases reported in Tennessee since 2011, most occurred in less than 20% of the state’s 95 counties. So even a few successfully diagnosed cases can tip off local doctors and officials that the disease is present in their area.

However, like West Nile, La Crosse disease is “neuroinvasive,” meaning it can invade and affect the central nervous system.

Research suggests that age, the development of the immune system and the strain of the virus are key factors in whether someone develops neuroinvasive La Crosse, while delays in seeking medical help also influence its severity. The most susceptible are immunocompromised individuals and children—more than 60 children a year are diagnosed with neuroinvasive La Crosse.

Severe cases are usually discovered in the hospital after the patient experiences a seizure, coma, partial paralysis of one side or altered mental state.

Severe La Crosse can result in long-term neurological damage. Deaths caused by infection are rare, but neurological and behavioral effects can occur after infection, including cognitive disorders, diagnoses of attention-deficit/hyperactivity disorder and reduced IQ scores.

Can La Crosse disease be prevented?

Until the scientific community understands more about the ecology and epidemiology of La Crosse, my colleagues and I will continue to recommend preventing the mosquito bite in the first place to avoid infections.

One tactic is to reduce local opportunities for the mosquitoes that carry La Crosse to breed. This includes getting rid of objects outdoors that can catch and contain water—like empty plant pots, cans or toys—because these can emulate the conditions of a mosquito-friendly forest. Mosquitoes carrying La Crosse virus are also found developing in tires containing water, so it’s a good idea to drill drainage holes in tire swings.

Another strategy is to try to avoid mosquitoes, perhaps by staying inside during peak mosquito hours, which are typically in the early evening.

The Environmental Protection Agency’s guide to the active ingredients in insect repellents describes which are most effective at repelling mosquitoes and how many hours they last. Like sunscreen, insect repellents may need to be reapplied while spending time outdoors.

Leah Laudick adored her six siblings and “enjoyed collecting rocks, chasing butterflies and picking flowers for her mom,” in the words of her father.