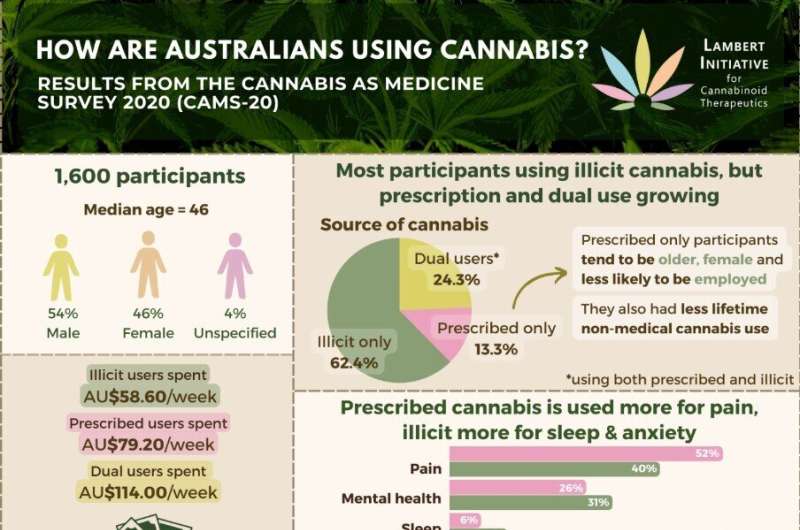 New research from the University of Sydney’s Lambert Initiative finds most Australians are still medicating with illicit cannabis, although numbers accessing prescription products have risen dramatically.

The third Cannabis as Medicine Survey (CAMS20) follows on from CAMS16 and CAMS18, and includes 1,600 people using medical cannabis between September 2020 and January 2021. The results were recently published in the Harm Reduction Journal.

The survey found 37% of respondents had received a legal prescription for medicinal cannabis—a significant increase from the 2.5% of respondents reporting prescription use in the 2018 iteration of the CAMS survey (CAMS18). Those who only used prescription cannabis tended to be older, female, and less likely to be employed.

“The data suggests we have seen a transition from illicit to legal use of medical cannabis,” said lead researcher Professor Nicholas Lintzeris, from the Faculty of Medicine and Health at the University of Sydney.

Overall, respondents reported positive outcomes of medical cannabis use, with 95% reporting improvement to their health.

The main reason for using prescribed medicinal cannabis was chronic pain, consistent with other prescription data from the Therapeutics Goods Administration, which approves prescription applications and tracks conditions being treated. People using illicit products were more likely to be treating mental health or sleep conditions.

Despite the large increase in patients receiving prescribed products in the last two years, only 24% of prescribed patients agreed that the current model for accessing medicinal cannabis was easy or straightforward.

A barrier identified by most respondents was the cost of accessing medicinal cannabis, with an average cost of $79 per week, highlighting the need to address cost of treatment for patients.

People using illicit medical cannabis also cited an inability to find medical practitioners who are willing to prescribe, consistent with findings from a recent 2020 Senate Inquiry into the barriers to patient access to medicinal cannabis in Australia. More work is required to enhance health provider education regarding medicinal cannabis.

“There are advantages in using prescribed medical cannabis over illicit cannabis,” said Professor Iain McGregor, Academic Director of the Lambert Initiative for Cannabinoid Therapeutics . “These include safer routes of administration, greater certainty of access, and better communication between patients and doctors. Patients can also be informed of the exact THC/CBD composition, which is an ongoing problem with illicit product. There should be further efforts to transition patients from illicit to regulated, quality-controlled, cannabis products.”