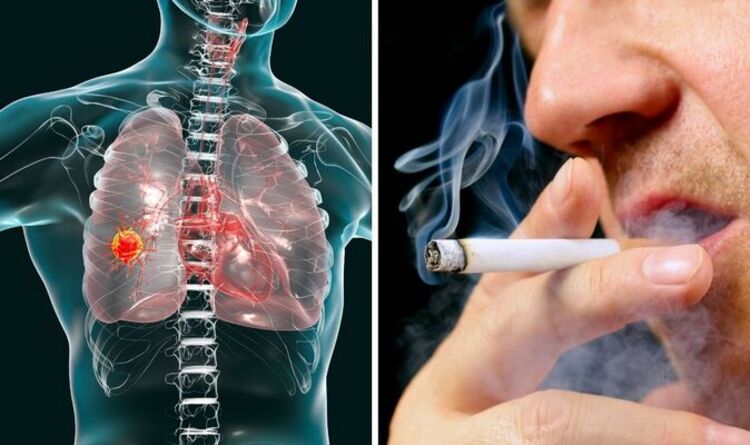 Your risk of developing lung cancer depends on a range of factors, from age and genetics to exposure factors and lifestyle factors.

This sounds scary, but your risk level is actually more controllable than you’d think.

The prevention of lung cancer is so much better than trying to treat it, because only one in 10 people diagnosed with the disease will live for 10 years or more.

So, what lifestyle changes can you make to improve your chances of avoiding the disease?

In the UK, more than seven in 10 lung cancer cases are caused by smoking.

According to the NHS, if you smoke more than 25 cigarettes a day you were 25 times more likely to get lung cancer than a non-smoker.

The average Brit smokes 10 cigarettes a day, so there are some people out there going above and beyond 25 at times.

About nine percent of lung cancers are caused by dietary factors.

You should also avoid eating too much sugar, as high blood sugar levels increase your risk of other cancers like breast and colorectal cancer.

The American Lung Association advised everyone to eat a reasonable amount of fresh fruits, vegetables, and whole grains, many of which are rich in antioxidants like berries, dark-green vegetables, oats, and fish to ward off lung cancer.

Some experts have claimed that being active doesn’t reduce the risk of lung cancer, but other evidence suggests that it does.

In fact, the majority of studies support the fact that total and recreational physical activity reduces lung cancer risk by 20 to 30 percent for women and 20 to 50 percent for men.

More research is needed to determine the specifics, but exercise has a huge range of health benefits and has been proven to help prevent other cancers too.

About five percent of lung cancer cases in the UK are caused by ionising radiation, 13 percent by workplace exposures, and eight percent by air pollution.

Radon is a natural radioactive gas that comes from tiny amounts of uranium present in all rocks and soils. It can sometimes be found in buildings.

If radon is breathed in, it can damage your lungs, particularly if you’re a smoker.

However, you don’t need to worry too much about this because radon gas causes a small number of lung cancer deaths in England.

Exposure to certain chemicals and substances used in occupations and industries (think arsenic, asbestos, coal, silica, and nickel) might increase your risk of lung cancer.

There are regulations in place to protect workers against occupational exposure to these substances, so again it’s not the biggest factor to worry about.